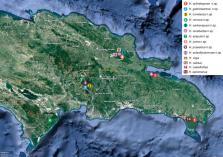 Differential impact of simultaneous migration on coevolving hosts and parasites

Andrew Morgan,  Michael A. Brockhurst,  Laura Lopez-Pascua … (2007)
Background The dynamics of antagonistic host-parasite coevolution are believed to be crucially dependent on the rate of migration between populations. We addressed how the rate of simultaneous migration of host and parasite affected resistance and infectivity evolution of coevolving meta-populations of the bacterium Pseudomonas fluorescens and a viral parasite (bacteriophage). The increase in genetic variation resulting from small amounts of migration is expected to increase rates of adaptation of both host and parasite. However, previous studies suggest phages should benefit more from migration than bacteria; because in the absence of migration, phages are more genetically limited and have a lower evolutionary potential compared to the bacteria. Results The results supported the hypothesis: migration increased the resistance of bacteria to their local (sympatric) hosts. Moreover, migration benefited phages more than hosts with respect to 'global' (measured with respect to the whole range of migration regimes) patterns of resistance and infectivity, because of the differential evolutionary responses of bacteria and phage to different migration regimes. Specifically, we found bacterial global resistance peaked at intermediate rates of migration, whereas phage global infectivity plateaued when migration rates were greater than zero. Conclusion These results suggest that simultaneous migration of hosts and parasites can dramatically affect the interaction of host and parasite. More specifically, the organism with the lower evolutionary potential may gain the greater evolutionary advantage from migration.

The West Indies as a laboratory of biogeography and evolution.

Eldredge Bermingham,  Robert Ricklefs (2008)
Islands have long provided material and inspiration for the study of evolution and ecology. The West Indies are complex historically and geographically, providing a rich backdrop for the analysis of colonization, diversification and extinction of species. They are sufficiently isolated to sustain endemic forms and close enough to sources of colonists to develop a dynamic interaction with surrounding continental regions. The Greater Antilles comprise old fragments of continental crust, some very large; the Lesser Antilles are a more recent volcanic island arc, and the low-lying Bahama Islands are scattered on a shallow oceanic platform. Dating of island lineages using molecular methods indicates over-water dispersal of most inhabitants of the West Indies, although direct connections with what is now southern Mexico in the Early Tertiary, and subsequent land bridges or stepping stone islands linking to Central and South America might also have facilitated colonization. Species-area relationships within the West Indies suggest a strong role for endemic radiations and extinction in shaping patterns of diversity. Diversification is promoted by opportunities for allopatric divergence between islands, or within the large islands of the Greater Antilles, with a classic example provided by the Anolis lizards. The timing of colonization events using molecular clocks permits analysis of colonization-extinction dynamics by means of species accumulation curves. These indicate low rates of colonization and extinction for reptiles and amphibians in the Greater Antilles, with estimated average persistence times of lineages in the West Indies exceeding 30Myr. Even though individual island populations of birds might persist an average of 2Myr on larger islands in the Lesser Antilles, recolonization from within the archipelago appears to maintain avian lineages within the island chain indefinitely. Birds of the Lesser Antilles also provide evidence of a mass extinction event within the past million years, emphasizing the time-heterogeneity of historical processes. Geographical dynamics are matched by ecological changes in the distribution of species within islands over time resulting from adaptive radiation and shifts in habitat, often following repeatable patterns. Although extinction is relatively infrequent under natural conditions, changes in island environments as a result of human activities have exterminated many populations and others--especially old, endemic species--remain vulnerable. Conservation efforts are strengthened by recognition of aesthetic, cultural and scientific values of the unique flora and fauna of the West Indies.

The evolution of asymmetric genitalia in spiders and insects.

Manuel Huber,  Michael B. Sinclair,  Michael Schmitt (2007)
Asymmetries are a pervading phenomenon in otherwise bilaterally symmetric organisms and recent studies have highlighted their potential impact on our understanding of fundamental evolutionary processes like the evolution of development and the selection for morphological novelties caused by behavioural changes. One character system that is particularly promising in this respect is animal genitalia because (1) asymmetries in genitalia have evolved many times convergently, and (2) the taxonomic literature provides a tremendous amount of comparative data on these organs. This review is an attempt to focus attention on this promising but neglected topic by summarizing what we know about insect genital asymmetries, and by contrasting this with the situation in spiders, a group in which genital asymmetries are rare. In spiders, only four independent origins of genital asymmetry are known, two in Theridiidae (Tidarren/Echinotheridion, Asygyna) and two in Pholcidae (Metagonia, Kaliana). In insects, on the other hand, genital asymmetry is a widespread and common phenomenon. In some insect orders or superorders, genital asymmetry is in the groundplan (e.g. Dictyoptera, Embiidina, Phasmatodea), in others it has evolved multiple times convergently (e.g. Coleoptera, Diptera, Heteroptera, Lepidoptera). Surprisingly, the huge but widely scattered information has not been reviewed for over 70 years. We combine data from studies on taxonomy, mating behaviour, genital mechanics, and phylogeny, to explain why genital asymmetry is so common in insects but so rare in spiders. We identify further fundamental differences between spider and insect genital asymmetries: (1) in most spiders, the direction of asymmetry is random, in most insects it is fixed; (2) in most spiders, asymmetry evolved first (or only) in the female while in insects genital asymmetry is overwhelmingly limited to the male. We thus propose that sexual selection has played a crucial role in the evolution of insect genital asymmetry, via a route that is accessible to insects but not to spiders. The centerpiece in this insect route to asymmetry is changes in mating position. Available evidence strongly suggests that the plesiomorphic neopteran mating position is a female-above position. Changes to male-dominated positions have occurred frequently, and some of the resulting positions require abdominal twisting, flexing, and asymmetric contact between male and female genitalia. Insects with their median unpaired sperm transfer organ may adopt a one-sided asymmetric position and still transfer the whole amount of sperm. Spiders with their paired sperm transfer organs can only mate in symmetrical or alternating two-sided positions without foregoing transfer of half of their sperm. We propose several hypotheses regarding the evolution of genital asymmetry. One explains morphological asymmetry as a mechanical compensation for evolutionary and behavioural changes of mating position. The morphological asymmetry per se is not advantageous, but rather the newly adopted mating position is. The second hypothesis predicts a split of functions between right and left sides. In contrast to the previous hypothesis, morphological asymmetry per se is advantageous. A third hypothesis evokes internal space constraints that favour asymmetric placement and morphology of internal organs and may secondarily affect the genitalia. Further hypotheses appear supported by a few exceptional cases only.