Effects of obesity on bone metabolism 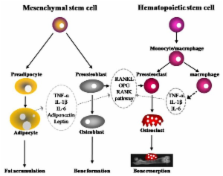 Obesity is traditionally viewed to be beneficial to bone health because of well-established positive effect of mechanical loading conferred by body weight on bone formation, despite being a risk factor for many other chronic health disorders. Although body mass has a positive effect on bone formation, whether the mass derived from an obesity condition or excessive fat accumulation is beneficial to bone remains controversial. The underline pathophysiological relationship between obesity and bone is complex and continues to be an active research area. Recent data from epidemiological and animal studies strongly support that fat accumulation is detrimental to bone mass. To our knowledge, obesity possibly affects bone metabolism through several mechanisms. Because both adipocytes and osteoblasts are derived from a common multipotential mesenchymal stem cell, obesity may increase adipocyte differentiation and fat accumulation while decrease osteoblast differentiation and bone formation. Obesity is associated with chronic inflammation. The increased circulating and tissue proinflammatory cytokines in obesity may promote osteoclast activity and bone resorption through modifying the receptor activator of NF-κB (RANK)/RANK ligand/osteoprotegerin pathway. Furthermore, the excessive secretion of leptin and/or decreased production of adiponectin by adipocytes in obesity may either directly affect bone formation or indirectly affect bone resorption through up-regulated proinflammatory cytokine production. Finally, high-fat intake may interfere with intestinal calcium absorption and therefore decrease calcium availability for bone formation. Unraveling the relationship between fat and bone metabolism at molecular level may help us to develop therapeutic agents to prevent or treat both obesity and osteoporosis.

Obesity, defined as having a body mass index ≥ 30 kg/m 2, is a condition in which excessive body fat accumulates to a degree that adversely affects health [ 1]. The rates of obesity rates have doubled since 1980 [ 2] and as of 2007, 33% of men and 35% of women in the US are obese [ 3]. Obesity is positively associated to many chronic disorders such as hypertension, dyslipidemia, type 2 diabetes mellitus, coronary heart disease, and certain cancers [ 4- 6]. It is estimated that the direct medical cost associated with obesity in the United States is ~$100 billion per year [ 7].

Bone mass and strength decrease during adulthood, especially in women after menopause [ 8]. These changes can culminate in osteoporosis, a disease characterized by low bone mass and microarchitectural deterioration resulting in increased bone fracture risk. It is estimated that there are about 10 million Americans over the age of 50 who have osteoporosis while another 34 million people are at risk of developing the disease [ 9]. In 2001, osteoporosis alone accounted for some $17 billion in direct annual healthcare expenditure.

Several lines of evidence suggest that obesity and bone metabolism are interrelated. First, both osteoblasts (bone forming cells) and adipocytes (energy storing cells) are derived from a common mesenchymal stem cell [ 10] and agents inhibiting adipogenesis stimulated osteoblast differentiation [ 11- 13] and vice versa, those inhibiting osteoblastogenesis increased adipogenesis [ 14]. Second, decreased bone marrow osteoblastogenesis with aging is usually accompanied with increased marrow adipogenesis [ 15, 16]. Third, chronic use of steroid hormone, such as glucocorticoid, results in obesity accompanied by rapid bone loss [ 17, 18]. Fourth, both obesity and osteoporosis are associated with elevated oxidative stress and increased production of proinflammatory cytokines [ 19, 20]. At present, the mechanisms for the effects of obesity on bone metabolism are not well defined and will be the focus of this review.

Daniel Vinson,  M Amling,  Jun Shen … (2000)
Gonadal failure induces bone loss while obesity prevents it. This raises the possibility that bone mass, body weight, and gonadal function are regulated by common pathways. To test this hypothesis, we studied leptin-deficient and leptin receptor-deficient mice that are obese and hypogonadic. Both mutant mice have an increased bone formation leading to high bone mass despite hypogonadism and hypercortisolism. This phenotype is dominant, independent of the presence of fat, and specific for the absence of leptin signaling. There is no leptin signaling in osteoblasts but intracerebroventricular infusion of leptin causes bone loss in leptin-deficient and wild-type mice. This study identifies leptin as a potent inhibitor of bone formation acting through the central nervous system and therefore describes the central nature of bone mass control and its disorders.

K. Hotta,  H Kuriyama,  N Ouchi … (2000)
Among the many adipocyte-derived endocrine factors, we found an adipocyte-derived plasma protein, adiponectin, that was decreased in obesity. We recently demonstrated that adiponectin inhibited tumor necrosis factor-alpha (TNF-alpha)-induced expression of endothelial adhesion molecules and that plasma adiponectin level was reduced in patients with coronary artery disease (CIRCULATION: 1999;100:2473-2476). However, the intracellular signal by which adiponectin suppressed adhesion molecule expression was not elucidated. The present study investigated the mechanism of modulation for endothelial function by adiponectin. The interaction between adiponectin and human aortic endothelial cells (HAECs) was estimated by cell ELISA using biotinylated adiponectin. HAECs were preincubated for 18 hours with 50 microg/mL of adiponectin, then exposed to TNF-alpha (10 U/mL) or vehicle for the times indicated. NF-kappaB-DNA binding activity was determined by electrophoretic mobility shift assays. TNF-alpha-inducible phosphorylation signals were detected by immunoblotting. Adiponectin specifically bound to HAECs in a saturable manner and inhibited TNF-alpha-induced mRNA expression of monocyte adhesion molecules without affecting the interaction between TNF-alpha and its receptors. Adiponectin suppressed TNF-alpha-induced IkappaB-alpha phosphorylation and subsequent NF-kappaB activation without affecting other TNF-alpha-mediated phosphorylation signals, including Jun N-terminal kinase, p38 kinase, and Akt kinase. This inhibitory effect of adiponectin is accompanied by cAMP accumulation and is blocked by either adenylate cyclase inhibitor or protein kinase A (PKA) inhibitor. These observations raise the possibility that adiponectin, which is naturally present in the blood stream, modulates the inflammatory response of endothelial cells through cross talk between cAMP-PKA and NF-kappaB signaling pathways.

Mechanisms of disease: is osteoporosis the obesity of bone?

Raymond Rosen,  Mary Bouxsein (2005)
Osteoporosis and obesity, two disorders of body composition, are growing in prevalence. Interestingly, these diseases share several features including a genetic predisposition and a common progenitor cell. With aging, the composition of bone marrow shifts to favor the presence of adipocytes, osteoclast activity increases, and osteoblast function declines, resulting in osteoporosis. Secondary causes of osteoporosis, including diabetes mellitus, glucocorticoids and immobility, are associated with bone-marrow adiposity. In this review, we ask a provocative question: does fat infiltration in the bone marrow cause low bone mass or is it a result of bone loss? Unraveling the interface between bone and fat at a molecular and cellular level is likely to lead to a better understanding of several diseases, and to the development of drugs for both osteoporosis and obesity.