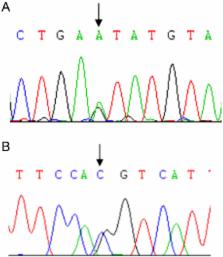 This study aims to summarize and analyze the clinical manifestations, genetic characteristics, treatment modalities and long-term prognosis of congenital hyperinsulinemia (CHI) in Chinese children. Sixty children with CHI, who were treated at Beijing Children’s Hospital from January 2014 to August 2017, and their families, were selected as subjects. The CHI-related causative genes in children were sequenced and analyzed using second-generation sequencing technology. Furthermore, the genetic pathogenesis and clinical characteristics of Chinese children with CHI were explored. Among the 60 CHI children, 27 children (27/60, 45%) carried known CHI-related gene mutations: 16 children (26.7%) carried ABCC8 gene mutations, seven children (11.7%) carried GLUD1 gene mutations, one child carried GCK gene mutations, two children carried HNF4α gene mutations and one child carried HADH gene mutations. In these 60 patients, eight patients underwent 18F-L-DOPA PET scan for the pancreas, and five children were found to be focal type. The treatment of diazoxide was ineffective in these five patients, and hypoglycemia could be controlled after receiving partial pancreatectomy. In conclusion, ABCC8 gene mutation is the most common cause of CHI in Chinese children. The early genetic analysis of children’s families has an important guiding significance for treatment planning and prognosis assessment.

Sue Richards,  Nazneen Aziz,  Sherri Bale … (2015)
The American College of Medical Genetics and Genomics (ACMG) previously developed guidance for the interpretation of sequence variants. 1 In the past decade, sequencing technology has evolved rapidly with the advent of high-throughput next generation sequencing. By adopting and leveraging next generation sequencing, clinical laboratories are now performing an ever increasing catalogue of genetic testing spanning genotyping, single genes, gene panels, exomes, genomes, transcriptomes and epigenetic assays for genetic disorders. By virtue of increased complexity, this paradigm shift in genetic testing has been accompanied by new challenges in sequence interpretation. In this context, the ACMG convened a workgroup in 2013 comprised of representatives from the ACMG, the Association for Molecular Pathology (AMP) and the College of American Pathologists (CAP) to revisit and revise the standards and guidelines for the interpretation of sequence variants. The group consisted of clinical laboratory directors and clinicians. This report represents expert opinion of the workgroup with input from ACMG, AMP and CAP stakeholders. These recommendations primarily apply to the breadth of genetic tests used in clinical laboratories including genotyping, single genes, panels, exomes and genomes. This report recommends the use of specific standard terminology: ‘pathogenic’, ‘likely pathogenic’, ‘uncertain significance’, ‘likely benign’, and ‘benign’ to describe variants identified in Mendelian disorders. Moreover, this recommendation describes a process for classification of variants into these five categories based on criteria using typical types of variant evidence (e.g. population data, computational data, functional data, segregation data, etc.). Because of the increased complexity of analysis and interpretation of clinical genetic testing described in this report, the ACMG strongly recommends that clinical molecular genetic testing should be performed in a CLIA-approved laboratory with results interpreted by a board-certified clinical molecular geneticist or molecular genetic pathologist or equivalent.

Update on mutations in glucokinase (GCK), which cause maturity-onset diabetes of the young, permanent neonatal diabetes, and hyperinsulinemic hypoglycemia.

Sian Ellard,  Cécile Saint Cloment,  Kevin Colclough … (2009)
Glucokinase is a key regulatory enzyme in the pancreatic beta-cell. It plays a crucial role in the regulation of insulin secretion and has been termed the glucose sensor in pancreatic beta-cells. Given its central role in the regulation of insulin release it is understandable that mutations in the gene encoding glucokinase (GCK) can cause both hyper- and hypoglycemia. Heterozygous inactivating mutations in GCK cause maturity-onset diabetes of the young (MODY) subtype glucokinase (GCK), characterized by mild fasting hyperglycemia, which is present at birth but often only detected later in life during screening for other purposes. Homozygous inactivating GCK mutations result in a more severe phenotype presenting at birth as permanent neonatal diabetes mellitus (PNDM). A growing number of heterozygous activating GCK mutations that cause hypoglycemia have also been reported. A total of 620 mutations in the GCK gene have been described in a total of 1,441 families. There are no common mutations, and the mutations are distributed throughout the gene. The majority of activating mutations cluster in a discrete region of the protein termed the allosteric activator site. The identification of a GCK mutation in patients with both hyper- and hypoglycemia has implications for the clinical course and clinical management of their disorder.

The transcriptional response of the islet to pregnancy in mice.

Olga Smirnova,  Nancy Keller,  Steven Scherer … (2009)
The inability of the ss-cell to meet the demand for insulin brought about by insulin resistance leads to type 2 diabetes. In adults, ss-cell replication is one of the mechanisms thought to cause the expansion of ss-cell mass. Efforts to treat diabetes require knowledge of the pathways that drive facultative ss-cell proliferation in vivo. A robust physiological stimulus of ss-cell expansion is pregnancy and identifying the mechanisms underlying this stimulus may provide therapeutic leads for the treatment of type 2 diabetes. The peak in ss-cell proliferation during pregnancy occurs on d 14.5 of gestation in mice. Using advanced genomic approaches, we globally characterize the gene expression signature of pancreatic islets on d 14.5 of gestation during pregnancy. We identify a total of 1907 genes as differentially expressed in the islet during pregnancy. The islet's ability to compensate for relative insulin deficiency during metabolic stress is associated with the induction of both proliferative and survival pathways. A comparison of the genes induced in three different models of islet expansion suggests that diverse mechanisms can be recruited to expand islet mass. The identification of many novel genes involved in islet expansion during pregnancy provides an important resource for diabetes researchers to further investigate how these factors contribute to the maintenance of not only islet mass, but ultimately ss-cell mass.