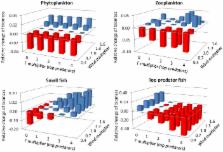 The effects of climate and fishing on marine ecosystems have usually been studied separately, but their interactions make ecosystem dynamics difficult to understand and predict. Of particular interest to management, the potential synergism or antagonism between fishing pressure and climate forcing is analysed in this paper, using an end-to-end ecosystem model of the southern Benguela ecosystem, built from coupling hydrodynamic, biogeochemical and multispecies fish models (ROMS-N 2P 2Z 2D 2-OSMOSE). Scenarios of different intensities of upwelling-favourable wind stress combined with scenarios of fishing top-predator fish were tested. Analyses of isolated drivers show that the bottom-up effect of the climate forcing propagates up the food chain whereas the top-down effect of fishing cascades down to zooplankton in unfavourable environmental conditions but dampens before it reaches phytoplankton. When considering both climate and fishing drivers together, it appears that top-down control dominates the link between top-predator fish and forage fish, whereas interactions between the lower trophic levels are dominated by bottom-up control. The forage fish functional group appears to be a central component of this ecosystem, being the meeting point of two opposite trophic controls. The set of combined scenarios shows that fishing pressure and upwelling-favourable wind stress have mostly dampened effects on fish populations, compared to predictions from the separate effects of the stressors. Dampened effects result in biomass accumulation at the top predator fish level but a depletion of biomass at the forage fish level. This should draw our attention to the evolution of this functional group, which appears as both structurally important in the trophic functioning of the ecosystem, and very sensitive to climate and fishing pressures. In particular, diagnoses considering fishing pressure only might be more optimistic than those that consider combined effects of fishing and environmental variability.

Pauly, Christensen, Dalsgaard … (1998)
The mean trophic level of the species groups reported in Food and Agricultural Organization global fisheries statistics declined from 1950 to 1994. This reflects a gradual transition in landings from long-lived, high trophic level, piscivorous bottom fish toward short-lived, low trophic level invertebrates and planktivorous pelagic fish. This effect, also found to be occurring in inland fisheries, is most pronounced in the Northern Hemisphere. Fishing down food webs (that is, at lower trophic levels) leads at first to increasing catches, then to a phase transition associated with stagnating or declining catches. These results indicate that present exploitation patterns are unsustainable.

The impacts of climate change in coastal marine systems.

Christopher Harley, A. Randall Hughes, Kristin M Hultgren … (2006)
Anthropogenically induced global climate change has profound implications for marine ecosystems and the economic and social systems that depend upon them. The relationship between temperature and individual performance is reasonably well understood, and much climate-related research has focused on potential shifts in distribution and abundance driven directly by temperature. However, recent work has revealed that both abiotic changes and biological responses in the ocean will be substantially more complex. For example, changes in ocean chemistry may be more important than changes in temperature for the performance and survival of many organisms. Ocean circulation, which drives larval transport, will also change, with important consequences for population dynamics. Furthermore, climatic impacts on one or a few 'leverage species' may result in sweeping community-level changes. Finally, synergistic effects between climate and other anthropogenic variables, particularly fishing pressure, will likely exacerbate climate-induced changes. Efforts to manage and conserve living marine systems in the face of climate change will require improvements to the existing predictive framework. Key directions for future research include identifying key demographic transitions that influence population dynamics, predicting changes in the community-level impacts of ecologically dominant species, incorporating populations' ability to evolve (adapt), and understanding the scales over which climate will change and living systems will respond.

Julia Baum, Boris Worm (2009)
1. Top-down control can be an important determinant of ecosystem structure and function, but in oceanic ecosystems, where cascading effects of predator depletions, recoveries, and invasions could be significant, such effects had rarely been demonstrated until recently. 2. Here we synthesize the evidence for oceanic top-down control that has emerged over the last decade, focusing on large, high trophic-level predators inhabiting continental shelves, seas, and the open ocean. 3. In these ecosystems, where controlled manipulations are largely infeasible, 'pseudo-experimental' analyses of predator-prey interactions that treat independent predator populations as 'replicates', and temporal or spatial contrasts in predator populations and climate as 'treatments', are increasingly employed to help disentangle predator effects from environmental variation and noise. 4. Substantial reductions in marine mammals, sharks, and piscivorous fishes have led to mesopredator and invertebrate predator increases. Conversely, abundant oceanic predators have suppressed prey abundances. Predation has also inhibited recovery of depleted species, sometimes through predator-prey role reversals. Trophic cascades have been initiated by oceanic predators linking to neritic food webs, but seem inconsistent in the pelagic realm with effects often attenuating at plankton. 5. Top-down control is not uniformly strong in the ocean, and appears contingent on the intensity and nature of perturbations to predator abundances. Predator diversity may dampen cascading effects except where nonselective fisheries deplete entire predator functional groups. In other cases, simultaneous exploitation of predator and prey can inhibit prey responses. Explicit consideration of anthropogenic modifications to oceanic foodwebs should help inform predictions about trophic control. 6. Synthesis and applications. Oceanic top-down control can have important socio-economic, conservation, and management implications as mesopredators and invertebrates assume dominance, and recovery of overexploited predators is impaired. Continued research aimed at integrating across trophic levels is needed to understand and forecast the ecosystem effects of changing oceanic predator abundances, the relative strength of top-down and bottom-up control, and interactions with intensifying anthropogenic stressors such as climate change.

This work was partially funded by the EUR-OCEANS Network of Excellence (contract of the European Commission No FP6-511106), by the European Collaborative Project MEECE (contract of the European Commission No FP7-212085) and by the EMIBIOS project through a grant from the French Foundation for Research on Biodiversity (FRB), “Modeling and Scenarios of Biodiversity” call for proposals, grant number APP-SCEN-2010-II. The funders had no role in study design, data collection and analysis, decision to publish, or preparation of the manuscript.