Implicit Detection of Poetic Harmony by the Naïve Brain 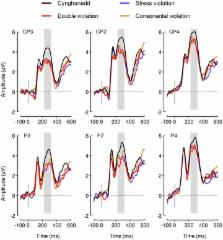 The power of poetry is universally acknowledged, but it is debatable whether its appreciation is reserved for experts. Here, we show that readers with no particular knowledge of a traditional form of Welsh poetry unconsciously distinguish phrases conforming to its complex poetic construction rules from those that violate them. We studied the brain response of native speakers of Welsh as they read meaningful sentences ending in a word that either complied with strict poetic construction rules, violated rules of consonantal repetition, violated stress pattern, or violated both these constraints. Upon reading the last word of each sentence, participants indicated sentence acceptability. As expected, our inexperienced participants did not explicitly distinguish between sentences that conformed to the poetic rules from those that violated them. However, in the case of orthodox sentences, the critical word elicited a distinctive brain response characteristic of target detection –the P3b– as compared to the other conditions, showing that speakers of Welsh with no expertise of this particular form of poetry implicitly detect poetic harmony. These results show for the first time that before we even consider literal meaning, the musical properties of poetry speak to the human mind in ways that escape consciousness.

On the utility of P3 amplitude as a measure of processing capacity.

ALBERT KOK (2001)
The present review focuses on the utility of the amplitude of P3 of as a measure of processing capacity and mental workload. The paper starts with a brief outline of the conceptual framework underlying the relationship between P3 amplitude and task demands, and the cognitive task manipulations that determine demands on capacity. P3 amplitude results are then discussed on the basis of an extensive review of the relevant literature. It is concluded that although it has often been assumed that P3 amplitude depends on the capacity for processing task relevant stimuli, the utility of P3 amplitude as a sensitive and diagnostic measure of processing capacity remains limited. The major factor that prompts this conclusion is that the two principal task variables that have been used to manipulate capacity allocation, namely task difficulty and task emphasis, have opposite effects on the amplitude of P3. I suggest that this is because, in many tasks, an increase in difficulty transforms the structure or actual content of the flow of information in the processing systems, thereby interfering with the very processes that underlie P3 generation. Finally, in an attempt to theoretically integrate the results of the reviewed studies, it is proposed that P3 amplitude reflects activation of elements in a event-categorization network that is controlled by the joint operation of attention and working memory.

Daniel Knight (1996)
The ability to respond to unexpected stimuli (the 'orienting response') is a fundamental characteristic of mammalian behaviour, but the brain mechanisms by which novelty is detected remain poorly defined. Electrophysiological recordings of scalp and intracranial event-related potentials (ERPs) have shown that novel stimuli activate a distributed network involving prefrontal and posterior association cortex. In addition, ERP and single-neuron recordings, as well as neuroimaging and modelling studies, have suggested that temporal cortical regions, including the hippocampus, are also involved. To examine further the role of the medial temporal lobe in novelty processing, I measured physiological responses to novel auditory and tactile stimuli in patients with damage to the posterior hippocampal region. In normal control subjects, unexpected novel stimuli produce a characteristic ERP signal, accompanied by an autonomic skin response. Both responses are reduced in hippocampal lesion patients, whereas the response to expected control stimuli is unaffected. Thus the hippocampal region, in addition to its known role in memory formation, is an essential component of the distributed limbic-cortical network that detects and responds to novel stimuli.

A metric for thought: a comparison of P300 latency and reaction time.

E Donchin,  T. G. McCarthy (1981)
We confirm that the latency of the P300 component of the human event-related potential is determined by processes involved in stimulus evaluation and categorization and is relatively independent of response selection and execution. Stimulus discriminability and stimulus-response compatibility were manipulated independently in an "additive-factors" design. Choice reaction time and P300 latency were obtained simultaneously for each trial. Although reaction time was affected by both discriminability and stimulus-response compatibility, P300 latency was affected only by stimulus discriminability.