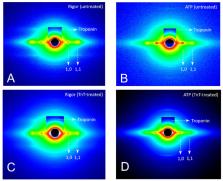 X-ray diffraction and tension measurement experiments were conducted on rat left ventricular skinned fibers with or without “troponin-T treatment,” which exchanges the endogenous troponin T/I/C complex with exogenous troponin-T. These experiments were performed to observe the structural changes in troponin-T within a fiber elicited by contractile crossbridge formation and investigate the abnormality of hypertrophic cardiomyopathy-related troponin-T mutants. The intensity of the troponin reflection at 1/38.5 nm −1 was decreased significantly by ATP addition after treatment with wild-type or mutant troponin-T, indicating that crossbridge formation affected the conformation of troponin-T. In experiments on cardiac fibers treated with the hypertrophic cardiomyopathy-related mutants E244D- and K247R-troponin-T, treatment with K247R-troponin-T did not recruit contracting actomyosin to a greater extent than wild-type-troponin-T, although a similar drop in the intensity of the troponin reflection occurred. Therefore, the conformational change in K247R-troponin-T was suggested to be unable to fully recruit actomyosin interaction, which may be the cause of cardiomyopathy.

Structure of the rigor actin-tropomyosin-myosin complex.

Elmar Behrmann,  Mirco Müller,  Pawel A. Penczek … (2012)
Regulation of myosin and filamentous actin interaction by tropomyosin is a central feature of contractile events in muscle and nonmuscle cells. However, little is known about molecular interactions within the complex and the trajectory of tropomyosin movement between its "open" and "closed" positions on the actin filament. Here, we report the 8 Å resolution structure of the rigor (nucleotide-free) actin-tropomyosin-myosin complex determined by cryo-electron microscopy. The pseudoatomic model of the complex, obtained from fitting crystal structures into the map, defines the large interface involving two adjacent actin monomers and one tropomyosin pseudorepeat per myosin contact. Severe forms of hereditary myopathies are linked to mutations that critically perturb this interface. Myosin binding results in a 23 Å shift of tropomyosin along actin. Complex domain motions occur in myosin, but not in actin. Based on our results, we propose a structural model for the tropomyosin-dependent modulation of myosin binding to actin. Copyright © 2012 Elsevier Inc. All rights reserved.

Mutations in the genes for cardiac troponin T and alpha-tropomyosin in hypertrophic cardiomyopathy.

Lucy T. Irving,  R Porter,  Philip Ward … (2011)
Stretch activation is important in the mechanical properties of vertebrate cardiac muscle and essential to the flight muscles of most insects. Despite decades of investigation, the underlying molecular mechanism of stretch activation is unknown. We investigated the role of recently observed connections between myosin and troponin, called "troponin bridges," by analyzing real-time X-ray diffraction "movies" from sinusoidally stretch-activated Lethocerus muscles. Observed changes in X-ray reflections arising from myosin heads, actin filaments, troponin, and tropomyosin were consistent with the hypothesis that troponin bridges are the key agent of mechanical signal transduction. The time-resolved sequence of molecular changes suggests a mechanism for stretch activation, in which troponin bridges mechanically tug tropomyosin aside to relieve tropomyosin's steric blocking of myosin-actin binding. This enables subsequent force production, with cross-bridge targeting further enhanced by stretch-induced lattice compression and thick-filament twisting. Similar linkages may operate in other muscle systems, such as mammalian cardiac muscle, where stretch activation is thought to aid in cardiac ejection.