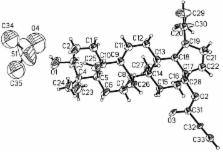 A new series of betulin derivatives containing one or two pharmacophores bearing an acetylenic and carbonyl function at the C-3 and/or C-28 positions has been synthesized and characterized by 1H- and 13C-NMR, IR, MS and elemental analyses. The crystal structure of 28- O-propynoylbetulin was determined by X-ray structural analysis. All new compounds, as well as betulin, were tested in vitro for their antiproliferative activity against human SW707 colorectal, CCRF/CEM leukemia, T47D breast cancer, and against murine P388 leukemia and Balb3T3 normal fibroblasts cell lines. Most of the compounds showed better cytotoxicity than betulin and cisplatin used as reference agent. 28- O-Propynoylbetulin was the most potent derivative, being over 500 times more potent than betulin and about 100 times more cytotoxic than cisplatin against the human leukemia (CCRF/CEM) cell line, with an ID 50 value of 0.02 μg/mL.

A short history of SHELX.

George M. Sheldrick (2007)
An account is given of the development of the SHELX system of computer programs from SHELX-76 to the present day. In addition to identifying useful innovations that have come into general use through their implementation in SHELX, a critical analysis is presented of the less-successful features, missed opportunities and desirable improvements for future releases of the software. An attempt is made to understand how a program originally designed for photographic intensity data, punched cards and computers over 10000 times slower than an average modern personal computer has managed to survive for so long. SHELXL is the most widely used program for small-molecule refinement and SHELXS and SHELXD are often employed for structure solution despite the availability of objectively superior programs. SHELXL also finds a niche for the refinement of macromolecules against high-resolution or twinned data; SHELXPRO acts as an interface for macromolecular applications. SHELXC, SHELXD and SHELXE are proving useful for the experimental phasing of macromolecules, especially because they are fast and robust and so are often employed in pipelines for high-throughput phasing. This paper could serve as a general literature citation when one or more of the open-source SHELX programs (and the Bruker AXS version SHELXTL) are employed in the course of a crystal-structure determination.

A short history of SHELX

Sami Alakurtti,  S Koskimies,  Jari Yli-Kauhaluoma … (2006)
Betulin (lup-20(29)-ene-3beta,28-diol) is an abundant naturally occurring triterpene and it is found predominantly in bushes and trees forming the principal extractive (up to 30% of dry weight) of the bark of birch trees. Presently, there is no significant use for this easily isolable compound, which makes it a potentially important raw material for polymers and a precursor of biologically active compounds. Betulin can be easily converted to betulinic acid, which possesses a wide spectrum of biological and pharmacological activities. Betulinic acid has antimalarial and anti-inflammatory activities. Betulinic acid and its derivatives have especially shown anti-HIV activity and cytotoxicity against a variety of tumor cell lines comparable to some clinically used drugs. A new mechanism of action has been confirmed for some of the most promising anti-HIV derivatives, which makes them potentially useful additives to the current anti-HIV therapy. Betulinic acid is specifically cytotoxic to several tumor cell lines by inducing apoptosis in cells. Moreover, it is non-toxic up to 500 mg/kg body weight in mice. The literature concerning derivatization of betulin for structure-activity relationship (SAR) studies and its pharmacological properties is reviewed.