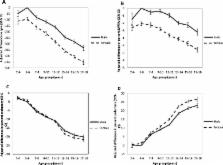 Boys were less sedentary and more active than girls at all ages. After 5 years of age there was an average cross-sectional decrease of 4.2 % in total physical activity with each additional year of age, due mainly to lower levels of light-intensity physical activity and greater time spent sedentary. Physical activity did not differ by weight status in the youngest children, but from age seven onwards, overweight/obese participants were less active than their normal weight counterparts. Physical activity varied between samples from different countries, with a 15–20 % difference between the highest and lowest countries at age 9–10 and a 26–28 % difference at age 12–13.

Physical activity differed between samples from different countries, but the associations between demographic characteristics and physical activity were consistently observed. Further research is needed to explore environmental and sociocultural explanations for these differences.

Physical activity from childhood to adulthood: a 21-year tracking study.

Risto Telama, Xiaolin Yang, Jorma Viikari … (2005)
The aim of this study was to investigate stability of physical activity from childhood and adolescence to adulthood in multiple age cohorts, and analyze how well adult physical activity can be predicted by various physical activity variables measured in childhood and adolescence. The data were drawn from the Cardiovascular Risk in Young Finns Study. The study was started in 1980, when cohorts of randomly sampled boys and girls aged 3, 6, 9, 12, 15, and 18 years (total of 2309 subjects) were examined for the first time. The measurements were repeated in 1983, 1986, 1989, 1992, and 2001. In 2001, the subjects (n =1563, 68%) were aged 24, 27, 30, 33, 36, and 39 years, respectively. Physical activity was measured by means of a short self-report questionnaire that was administered individually in connection with a medical examination. On the basis of a questionnaire, a physical activity index (PAI) was calculated. There were no significant differences in the 1980 PAI between participants and dropouts in 2001. Spearmans rank order correlation coefficients for the 21-year tracking period varied from 0.33 to 0.44 in males, and from 0.14 to 0.26 in females. At shorter time intervals the correlation was higher. On average, the tracking correlation was lower in females than in males. Persistent physical activity, defined as a score in the most active third of the PAI in two or three consecutive measurements, increased the odds that an individual would be active in adulthood. Odds ratios for 3-year continuous activity versus continuous inactivity varied from 4.30 to 7.10 in males and 2.90 to 5.60 in females. The corresponding odds ratios for 6-year persistence were 8.70 to 10.80 and 5.90 to 9.40. It was concluded that a high level of physical activity at ages 9 to 18, especially when continuous, significantly predicted a high level of adult physical activity. Although the correlations were low or moderate, we consider it important that school-age physical activity appears to influence adult physical activity, and through it, the public health of the general population.

Philip R. Nader, Robert Bradley, Renate Houts … (2008)
Decreased physical activity plays a critical role in the increase in childhood obesity. Although at least 60 minutes per day of moderate-to-vigorous physical activity (MVPA) is recommended, few longitudinal studies have determined the recent patterns of physical activity of youth. To determine the patterns and determinants of MVPA of youth followed from ages 9 to 15 years. Longitudinal descriptive analyses of the 1032 participants in the 1991-2007 National Institute of Child Health and Human Development Study of Early Child Care and Youth Development birth cohort from 10 study sites who had accelerometer-determined minutes of MVPA at ages 9 (year 2000), 11 (2002), 12 (2003), and 15 (2006) years. Participants included boys (517 [50.1%]) and girls (515 [49.9%]); 76.6% white (n = 791); and 24.5% (n = 231) lived in low-income families. Mean MVPA minutes per day, determined by 4 to 7 days of monitored activity. At age 9 years, children engaged in MVPA approximately 3 hours per day on both weekends and weekdays. Weekday MVPA decreased by 37 minutes per year [corrected], while weekend MVPA decreased by 39 minutes per year [corrected]. By age 15 years, adolescents were only engaging in MVPA for 50 minutes per weekday [corrected] and 36 minutes per weekend day [corrected]. Boys were more active than girls, spending 18 and 14 more minutes per day [corrected] in MVPA on the weekdays and weekends, respectively. The rate of decrease in MVPA was the same for boys and girls. The estimated age at which girls crossed below the recommended 60 minutes of MVPA per day was approximately 13.2 years for weekday [corrected] activity compared with boys at 14.9 years [corrected], and for weekend activity, girls crossed below the recommended 60 minutes of MVPA at 12.7 years [corrected] compared with boys at 13.6 years [corrected]. In this study cohort, measured physical activity decreased significantly between ages 9 and 15 years.

Physical activity levels and patterns of 9- and 15-yr-old European children.

Chris J Riddoch, Lars Bo Andersen, Niels Wedderkopp … (2004)
The purpose of this study was to assess physical activity levels and patterns from children participating in the European Youth Heart Study (EYHS). Very limited physical activity data exist that have been collected from representative samples of children and even fewer data collected where physical activity has been measured using objective methods. Subjects were 2185 children aged 9 and 15 yr from Denmark, Portugal, Estonia, and Norway. Physical activity data were obtained using MTI (formerly CSA) accelerometers. The primary outcome variable was established as the child's activity level (accelerometer counts per minute). Children wore the accelerometer for 3 or 4 d, which included at least 1 weekend day. Boys were more active than girls at age 9 (784 +/- 282 vs 649 +/- 204 counts.min-1) and 15 yr (615 +/- 228 vs 491 +/- 163 counts.min-1). With respect to time engaged in moderate-intensity activity, gender differences were apparent at age 9 (192 +/- 66 vs 160 +/- 54 min.d-1) and age 15 (99 +/- 45 vs 73 +/- 32 min.d-1). At age 9, the great majority of boys and girls achieved current health-related physical activity recommendations (97.4% and 97.6%, respectively). At age 15, fewer children achieved the guidelines and gender differences were apparent (boys 81.9% vs girls 62.0%). Accelerometers are a feasible and accurate instrument for use in large epidemiological studies of children's activity. Boys tend to be more active than girls, and there is a marked reduction in activity over the adolescent years. The great majority of younger children achieve current physical activity recommendations, whereas fewer older children do so-especially older girls.