Efficacy of CR4056, a first-in-class imidazoline-2 analgesic drug, in comparison with naproxen in two rat models of osteoarthritis 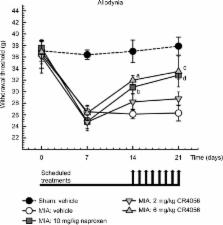 CR4056, (2-phenyl-6-(1H-imidazol-1yl) quinazoline), an imidazoline-2 (I2) receptor ligand, is a promising analgesic drug that has been reported to be effective in several animal models of pain. The aim of this study was to evaluate the effects of CR4056 in two well-established rat models of osteoarthritis (OA), mimicking the painful and structural components of human OA.

Knee OA was induced either by single intra-articular injection of monoiodoacetate (MIA) or by medial meniscal tear (MMT) in the right knee of male rats. In the MIA model, allodynia and hyperalgesia were measured as paw withdrawal threshold to mechanical stimulation. In the MMT model, pain behavior was analyzed as weight-bearing asymmetry (i.e. difference in hind paw weight distribution, HPWD) between the injured and the contralateral limbs.

The data presented here show that the I2 ligand CR4056 could be a new effective treatment for OA pain. The compound is currently under Phase II clinical evaluation for this indication.

Rohini Kuner (2010)
Chronic pain is a major challenge to clinical practice and basic science. The peripheral and central neural networks that mediate nociception show extensive plasticity in pathological disease states. Disease-induced plasticity can occur at both structural and functional levels and is manifest as changes in individual molecules, synapses, cellular function and network activity. Recent work has yielded a better understanding of communication within the neural matrix of physiological pain and has also brought important advances in concepts of injury-induced hyperalgesia and tactile allodynia and how these might contribute to the complex, multidimensional state of chronic pain. This review focuses on the molecular determinants of network plasticity in the central nervous system (CNS) and discusses their relevance to the development of new therapeutic approaches.

Weight bearing as a measure of disease progression and efficacy of anti-inflammatory compounds in a model of monosodium iodoacetate-induced osteoarthritis.

Pain related behaviour in two models of osteoarthritis in the rat knee.

Stuart Bevan,  John Rediske,  Clive Gentry … (2004)
Osteoarthritis (OA) is a major healthcare burden, with increasing incidence. Pain is the predominant clinical feature, yet therapy is ineffective for many patients. While there are considerable insights into the mechanisms underlying tissue remodelling, there is poor understanding of the link between disease pathology and pain. This is in part owing to the lack of animal models that combine both osteoarthritic tissue remodelling and pain. Here, we provide an analysis of pain related behaviours in two models of OA in the rat: partial medial meniscectomy and iodoacetate injection. Histological studies demonstrated that in both models, progressive osteoarthritic joint pathology developed over the course of the next 28 days. In the ipsilateral hind limb in both models, changes in the percentage bodyweight borne were small, whereas marked mechanical hyperalgesia and tactile allodynia were seen. The responses in the iodoacetate treated animals were generally more robust, and these animals were tested for pharmacological reversal of pain related behaviour. Morphine was able to attenuate hyperalgesia 3, 14 and 28 days after OA induction, and reversed allodynia at days 14 and 28, providing evidence that this behaviour was pain related. Diclofenac and paracetamol were effective 3 days after arthritic induction only, coinciding with a measurable swelling of the knee. Gabapentin varied in its ability to reverse both hyperalgesia and allodynia. The iodoacetate model provides a basis for studies on the mechanisms of pain in OA, and for development of novel therapeutic analgesics.