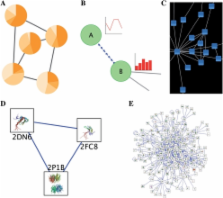 Summary: Cytoscape is a popular bioinformatics package for biological network visualization and data integration. Version 2.8 introduces two powerful new features—Custom Node Graphics and Attribute Equations—which can be used jointly to greatly enhance Cytoscape's data integration and visualization capabilities. Custom Node Graphics allow an image to be projected onto a node, including images generated dynamically or at remote locations. Attribute Equations provide Cytoscape with spreadsheet-like functionality in which the value of an attribute is computed dynamically as a function of other attributes and network properties.

Availability and implementation: Cytoscape is a desktop Java application released under the Library Gnu Public License (LGPL). Binary install bundles and source code for Cytoscape 2.8 are available for download from http://cytoscape.org.

Allan Kuchinsky,  Chris Sander,  Peng Wang … (2006)
Cytoscape is a free software package for visualizing, modeling and analyzing molecular and genetic interaction networks. This protocol explains how to use Cytoscape to analyze the results of mRNA expression profiling, and other functional genomics and proteomics experiments, in the context of an interaction network obtained for genes of interest. Five major steps are described: (i) obtaining a gene or protein network, (ii) displaying the network using layout algorithms, (iii) integrating with gene expression and other functional attributes, (iv) identifying putative complexes and functional modules and (v) identifying enriched Gene Ontology annotations in the network. These steps provide a broad sample of the types of analyses performed by Cytoscape.

James H Fowler,  Christopher Dawes,  Nicholas Christakis (2009)
Social networks exhibit strikingly systematic patterns across a wide range of human contexts. Although genetic variation accounts for a significant portion of the variation in many complex social behaviors, the heritability of egocentric social network attributes is unknown. Here, we show that 3 of these attributes (in-degree, transitivity, and centrality) are heritable. We then develop a "mirror network" method to test extant network models and show that none account for observed genetic variation in human social networks. We propose an alternative "Attract and Introduce" model with two simple forms of heterogeneity that generates significant heritability and other important network features. We show that the model is well suited to real social networks in humans. These results suggest that natural selection may have played a role in the evolution of social networks. They also suggest that modeling intrinsic variation in network attributes may be important for understanding the way genes affect human behaviors and the way these behaviors spread from person to person.