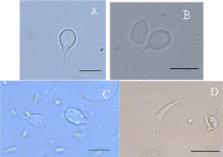 This work details a protocol for the isolation of Giardia species from their host animals and their identification based on their morphological and molecular characteristics. Giardia are intestinal protozoan parasites found in almost all vertebrates and the epidemiology of Giardia has attracted the attention of scientists due to their harm to humans and live stocks worldwide. Giardia trophozoites adhere to the surface of host's intestines using their ventral disc, and they also adhere the culture tube wall during in vitro culturing. We developed a method of isolating Giardia trophozoites according to this phenomenon, and a method of isolating Giardia cysts according to their special density as well. We validated the protocol by isolating and identifying Giardia species from their host animals, and all the results support that this methodology has a certain validity. It could help the further epidemiological researches and other researches requiring relatively pure living organism as materials of this harmful parasite. 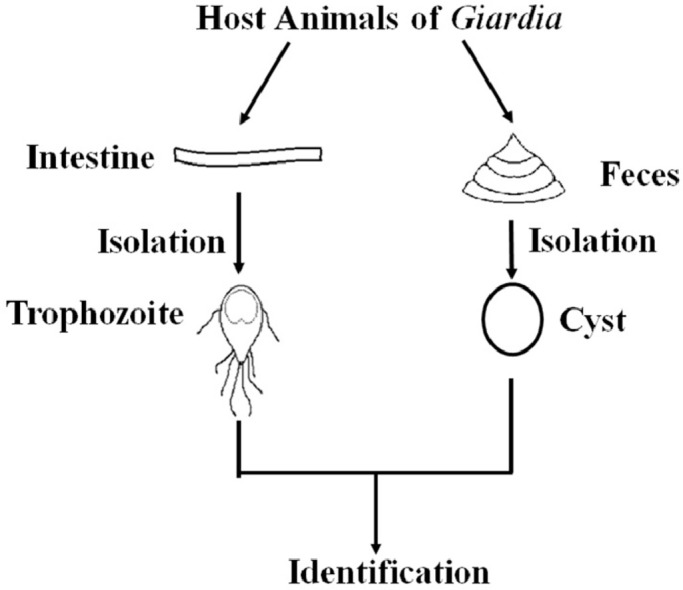 Simone M. Cacciò,  Una Ryan (2008)
Giardia duodenalis is a widespread parasite of mammalian species, including humans. Due to its invariant morphology, investigation on aspects such as host specificity and transmission patterns requires a direct genetic characterization of cysts/trophozoites from host samples. A number of molecular assays have been developed to help unravel the complex epidemiology of this infection. A coherent picture has emerged from those studies, indicating the existence of seven genetic groups (or assemblages), two of which (A and B) are found in both humans and animals, whereas the remaining five (C-G) are host-specific. Sequence-based surveys have identified a number of genotypes within assemblages A and B in animal species, some of which may have zoonotic potential. Recently, however, molecular approaches have been complicated by the recognition of intra-isolate sequence heterogeneity (i.e., "mixed templates", that affects identification of subtypes within each assemblage), and by the unreliable assignment of isolates to G. duodenalis assemblages generated by different genetic markers. This raises concerns about previous interpretation of genotyping data, especially when single genetic markers have been used. The mechanisms that may be responsible for these findings, including allelic sequence heterozygosity and meiotic recombination, are discussed.

A new species of Giardia Künstler, 1882 (Sarcomastigophora: Hexamitidae) in hamsters

Zhangxia Lyu,  Jingru Shao,  Min Xue … (2018)
Background Giardia spp. are flagellated protozoan parasites that infect humans and many other vertebrates worldwide. Currently seven species of Giardia are considered valid. Results Here, we report a new species, Giardia cricetidarum n. sp. in hamsters. Trophozoites of G. cricetidarum n. sp. are pear-shaped with four pairs of flagella and measure on average 14 μm (range 12–18 μm) in length and 10 μm (range 8–12 μm) in width. The trophozoites of the new species are generally larger and stouter than those of most of the other Giardia spp. and exhibit the lowest length/width ratio (c.1.40) of all recognized Giardia species. Cysts of G. cricetidarum n. sp. are ovoid and measure on average 11 μm (range 9–12 μm) in length and 10 μm (range 8–10 μm) in width and are indistinguishable from the cysts of other Giardia species. Molecular phylogenetic analyses based on beta-giardin, small subunit rRNA, and elongation factor-1 alpha loci all demonstrated that G. cricetidarum n. sp. is genetically distinct from all currently accepted Giardia spp. Investigation of the host range indicated that the new species was only found in hamsters (including Phodopus sungorus, P. campbelli and Mesocricetus auratus), while all the other described mammal-parasitizing species (G. muris, G. microti and G. intestinalis) each infect multiple hosts. Cross-transmission studies further demonstrated the apparent host specificity of G. cricetidarum n. sp. as it only infected hamsters. Trophozoites were found in high numbers in hamster intestines (5 × 105 – 5 × 106) and was rarely detected co-infecting with other Giardia spp. in the common hamster, suggesting it has some advantages in parasitizing hamsters. Conclusions This study has identified a new species of Giardia, which appears to be specific to hamsters, and together with the three other mammal-parasitizing Giardia species with different host ranges, may be able to be used as a model system for the study of evolutionary divergence of host parasitism strategies in Giardia. Electronic supplementary material The online version of this article (10.1186/s13071-018-2786-8) contains supplementary material, which is available to authorized users.

Molecular typing of Giardia duodenalis in cattle, sheep and goats in an arid area of central Iran