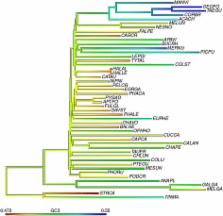 While effective population size (N e) and life history traits such as generation time are known to impact substitution rates, their potential effects on base composition evolution are less well understood. GC content increases with decreasing body mass in mammals, consistent with recombination-associated GC biased gene conversion (gBGC) more strongly impacting these lineages. However, shifts in chromosomal architecture and recombination landscapes between species may complicate the interpretation of these results. In birds, interchromosomal rearrangements are rare and the recombination landscape is conserved, suggesting that this group is well suited to assess the impact of life history on base composition.

Employing data from 45 newly and 3 previously sequenced avian genomes covering a broad range of taxa, we found that lineages with large populations and short generations exhibit higher GC content. The effect extends to both coding and non-coding sites, indicating that it is not due to selection on codon usage. Consistent with recombination driving base composition, GC content and heterogeneity were positively correlated with the rate of recombination. Moreover, we observed ongoing increases in GC in the majority of lineages.

Our results provide evidence that gBGC may drive patterns of nucleotide composition in avian genomes and are consistent with more effective gBGC in large populations and a greater number of meioses per unit time; that is, a shorter generation time. Thus, in accord with theoretical predictions, base composition evolution is substantially modulated by species life history.

High-resolution mapping of meiotic crossovers and non-crossovers in yeast.

Biased gene conversion and the evolution of mammalian genomic landscapes.

Laurent Duret,  Nicolas Galtier (2008)
Recombination is typically thought of as a symmetrical process resulting in large-scale reciprocal genetic exchanges between homologous chromosomes. Recombination events, however, are also accompanied by short-scale, unidirectional exchanges known as gene conversion in the neighborhood of the initiating double-strand break. A large body of evidence suggests that gene conversion is GC-biased in many eukaryotes, including mammals and human. AT/GC heterozygotes produce more GC- than AT-gametes, thus conferring a population advantage to GC-alleles in high-recombining regions. This apparently unimportant feature of our molecular machinery has major evolutionary consequences. Structurally, GC-biased gene conversion explains the spatial distribution of GC-content in mammalian genomes-the so-called isochore structure. Functionally, GC-biased gene conversion promotes the segregation and fixation of deleterious AT --> GC mutations, thus increasing our genomic mutation load. Here we review the recent evidence for a GC-biased gene conversion process in mammals, and its consequences for genomic landscapes, molecular evolution, and human functional genomics.

Jeramiah J Smith,  Shigehiro Kuraku,  Carson Holt … (2013)
Lampreys are representatives of an ancient vertebrate lineage that diverged from our own ∼500 million years ago. By virtue of this deeply shared ancestry, the sea lamprey (P. marinus) genome is uniquely poised to provide insight into the ancestry of vertebrate genomes and the underlying principles of vertebrate biology. Here, we present the first lamprey whole-genome sequence and assembly. We note challenges faced owing to its high content of repetitive elements and GC bases, as well as the absence of broad-scale sequence information from closely related species. Analyses of the assembly indicate that two whole-genome duplications likely occurred before the divergence of ancestral lamprey and gnathostome lineages. Moreover, the results help define key evolutionary events within vertebrate lineages, including the origin of myelin-associated proteins and the development of appendages. The lamprey genome provides an important resource for reconstructing vertebrate origins and the evolutionary events that have shaped the genomes of extant organisms.