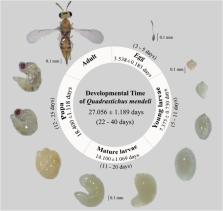 Quadrastichus mendeli Kim & La Salle, a parasitoid of Leptocybe invasa Fisher & La Salle, is a uniparental species. This study assessed the biological traits of Q. mendeli in the laboratory at a temperature of 27 ± 1 °C. Diets had a highly significant effect on the mean longevity of female Q. mendeli. Feeding honey solution prolonged the mean longevity of the parasitoid to 4.80 days. The estimated 50% survival period was 3 days. The mean potential fecundity in all ages was 8.85 eggs per female. Age had a highly significant effect on the mean egg load. There was a positive relationship between egg load and female size. The mean of realized fecundity throughout the life span was 2.47 progenies per female. The mean developmental time of Q. mendeli from the egg to adult stage was 27.06 days. The shorter developmental time of Q. mendeli in comparison to its host can be considered a reason for the successful control of L. invasa in Thailand.

Sex determination in the hymenoptera.

George Heimpel,  Jetske G. de Boer (2008)
The dominant and ancestral mode of sex determination in the Hymenoptera is arrhenotokous parthenogenesis, in which diploid females develop from fertilized eggs and haploid males develop from unfertilized eggs. We discuss recent progress in the understanding of the genetic and cytoplasmic mechanisms that make arrhenotoky possible. The best-understood mode of sex determination in the Hymenoptera is complementary sex determination (CSD), in which diploid males are produced under conditions of inbreeding. The gene mediating CSD has recently been cloned in the honey bee and has been named the complementary sex determiner. However, CSD is only known from 4 of 21 hymenopteran superfamilies, with some taxa showing clear evidence of the absence of CSD. Sex determination in the model hymenopteran Nasonia vitripennis does not involve CSD, but it is consistent with a form of genomic imprinting in which activation of the female developmental pathway requires paternally derived genes. Some other hymenopterans are not arrhenotokous but instead exhibit thelytoky or paternal genome elimination.

Incidence of a new sex-ratio-distorting endosymbiotic bacterium among arthropods.

R Velten,  John Weeks,  Richard Stouthamer (2003)
Many intracellular micro-organisms are now known to cause reproductive abnormalities and other phenomena in their hosts. The endosymbiont Wolbachia is the best known of these reproductive manipulators owing to its extremely high incidence among arthropods and the diverse host effects it has been implicated as causing. However, recent evidence suggests that another intracellular bacterium, a Cytophaga-like organism (CLO), may also induce several reproductive effects in its hosts. Here, we present the first survey of arthropod hosts for infection by the CLO. We use a sensitive hemi-nested polymerase chain reaction method to screen 223 species from 20 arthropod orders for infection by the CLO and Wolbachia. The results indicate that, although not as prevalent as Wolbachia, the CLO infects a significant number of arthropod hosts (ca. 7.2%). In addition, double infections of the CLO and Wolbachia were found in individuals of seven arthropod species. Sequencing analysis of the 16S rDNA region of the CLO indicates evidence for horizontal transmission of the CLO strains. We discuss these results with reference to future studies on host effects induced by intracellular micro-organisms.