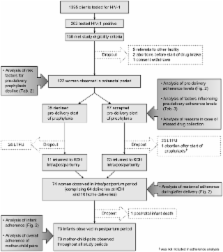 ScienceOpenPMC
Bookmark
There is no author summary for this article yet. Authors can add summaries to their articles on ScienceOpen to make them more accessible to a non-specialist audience.
BackgroundSince 2008, Tanzanian guidelines for prevention of mother-to-child-transmission of HIV (PMTCT) recommend combination regimen for mother and infant starting in gestational week 28. Combination prophylaxis is assumed to be more effective and less prone to resistance formation compared to single-drug interventions, but the required continuous collection and intake of drugs might pose a challenge on adherence especially in peripheral resource-limited settings. This study aimed at analyzing adherence to combination prophylaxis under field conditions in a rural health facility in Kyela, Tanzania.Methods and FindingsA cohort of 122 pregnant women willing to start combination prophylaxis in Kyela District Hospital was enrolled in an observational study. Risk factors for decline of prophylaxis were determined, and adherence levels before, during and after delivery were calculated. In multivariate analysis, identified risk factors for declining pre-delivery prophylaxis included maternal age below 24 years, no income-generating activity, and enrolment before 24.5 gestational weeks, with odds ratios of 5.8 (P = 0.002), 4.4 (P = 0.015) and 7.8 (P = 0.001), respectively. Women who stated to have disclosed their HIV status were significantly more adherent in the pre-delivery period than women who did not (P = 0.004). In the intra- and postpartum period, rather low drug adherence rates during hospitalization indicated unsatisfactory staff performance. Only ten mother-child pairs were at least 80% adherent during all intervention phases; one single mother-child pair met a 95% adherence threshold.ConclusionsAchieving adherence to combination prophylaxis has shown to be challenging in this rural study setting. Our findings underline the need for additional supervision for PMTCT staff as well as for clients, especially by encouraging them to seek social support through status disclosure. Prophylaxis uptake might be improved by preponing drug intake to an earlier gestational age. Limited structural conditions of a healthcare setting should be taken into serious account when implementing PMTCT combination prophylaxis.

Adherence to antiretroviral therapy in sub-Saharan Africa and North America: a meta-analysis.

James Orbinski,  Curtis Cooper,  Gordon Guyatt … (2006)
Adherence to antiretroviral therapy is a powerful predictor of survival for individuals living with human immunodeficiency virus (HIV) and AIDS. Concerns about incomplete adherence among patients living in poverty have been an important consideration in expanding the access to antiretroviral therapy in sub-Saharan Africa. To evaluate estimates of antiretroviral therapy adherence in sub-Saharan Africa and North America. Eleven electronic databases were searched along with major conference abstract databases (inclusion dates: inception of database up until April 18, 2006) for all English-language articles and abstracts; and researchers and treatment advocacy groups were contacted. Study Selection and Data Abstraction To best reflect the general population, studies of mixed populations in both North America and Africa were selected. Studies evaluating specific populations such as men only, homeless individuals, or drug users, were excluded. The data were abstracted in duplicate on study adherence outcomes, thresholds used to determine adherence, and characteristics of the populations. A random-effects meta-analysis was performed in which heterogeneity was examined using multivariable random-effects logistic regression. A sensitivity analysis was performed using Bayesian methods. Thirty-one studies from North America (28 full-text articles and 3 abstracts) and 27 studies (9 full-text articles and 18 abstracts) from sub-Saharan Africa were included. African studies represented 12 sub-Saharan countries. Of the North American studies, 71% used patient self-report to assess adherence; this was true of 66% of the African assessments. Studies reported similar thresholds for adherence monitoring (eg, 100%, >95%, >90%, >80%). A pooled analysis of the North American studies (17,573 patients total) indicated a pooled estimate of 55% (95% confidence interval, 49%-62%; I2, 98.6%) of the populations achieving adequate levels of adherence. Our pooled analysis of African studies (12,116 patients total) indicated a pooled estimate of 77% (95% confidence interval, 68%-85%; I2, 98.4%). Study continent, adherence thresholds, and study quality were significant predictors of heterogeneity. Bayesian analysis was used as an alternative statistical method for combining adherence rates and provided similar findings. Our findings indicate that favorable levels of adherence, much of which was assessed via patient self-report, can be achieved in sub-Saharan African settings and that adherence remains a concern in North America.

Laura Guay,  Philippa Musoke,  Thomas Fleming … (1999)
The AIDS Clinical Trials Group protocol 076 zidovudine prophylaxis regimen for HIV-1-infected pregnant women and their babies has been associated with a significant decrease in vertical HIV-1 transmission in non-breastfeeding women in developed countries. We compared the safety and efficacy of short-course nevirapine or zidovudine during labour and the first week of life. From November, 1997, to April, 1999, we enrolled 626 HIV-1-infected pregnant women at Mulago Hospital in Kampala, Uganda. We randomly assigned mothers nevirapine 200 mg orally at onset of labour and 2 mg/kg to babies within 72 h of birth, or zidovudine 600 mg orally to the mother at onset of labour and 300 mg every 3 h until delivery, and 4 mg/kg orally twice daily to babies for 7 days after birth. We tested babies for HIV-1 infection at birth, 6-8 weeks, and 14-16 weeks by HIV-1 RNA PCR. We assessed HIV-1 transmission and HIV-1-free survival with Kaplan-Meier analysis. Nearly all babies (98.8%) were breastfed, and 95.6% were still breastfeeding at age 14-16 weeks. The estimated risks of HIV-1 transmission in the zidovudine and nevirapine groups were: 10.4% and 8.2% at birth (p=0.354); 21.3% and 11.9% by age 6-8 weeks (p=0.0027); and 25.1% and 13.1% by age 14-16 weeks (p=0.0006). The efficacy of nevirapine compared with zidovudine was 47% (95% CI 20-64) up to age 14-16 weeks. The two regimens were well tolerated and adverse events were similar in the two groups. Nevirapine lowered the risk of HIV-1 transmission during the first 14-16 weeks of life by nearly 50% in a breastfeeding population. This simple and inexpensive regimen could decrease mother-to-child HIV-1 transmission in less-developed countries.

James N. Kiarie,  Dorothy A Mbori-Ngacha,  Alex N John … (2004)
To determine effect of partner involvement and couple counseling on uptake of interventions to prevent HIV-1 transmission, women attending a Nairobi antenatal clinic were encouraged to return with partners for voluntary HIV-1 counseling and testing (VCT) and offered individual or couple posttest counseling. Nevirapine was provided to HIV-1-seropositive women and condoms distributed to all participants. Among 2104 women accepting testing, 308 (15%) had partners participate in VCT, of whom 116 (38%) were couple counseled. Thirty-two (10%) of 314 HIV-1-seropositive women came with partners for VCT; these women were 3-fold more likely to return for nevirapine (P = 0.02) and to report administering nevirapine at delivery (P = 0.009). Nevirapine use was reported by 88% of HIV-infected women who were couple counseled, 67% whose partners came but were not couple counseled, and 45%whose partners did not present for VCT (P for trend = 0.006). HIV-1-seropositive women receiving couple counseling were 5-fold more likely to avoid breast-feeding (P = 0.03) compared with those counseled individually. Partner notification of HIV-1-positive results was reported by 138 women (64%) and was associated with 4-fold greater likelihood of condom use (P = 0.004). Partner participation in VCT and couple counseling increased uptake of nevirapine and formula feeding. Antenatal couple counseling may be a useful strategy to promote HIV-1 prevention interventions.