Trends in the incidence, treatment, and survival of patients with lung cancer in the last four decades 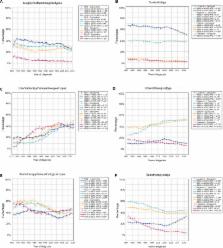 This study used the Surveillance, Epidemiology, and End Results (SEER) data to investigate the changes in incidence, treatment, and survival of lung cancer from 1973 to 2015.

The clinical and epidemiological data of patients with lung cancer were obtained from the SEER database. Joinpoint regression models were used to estimate the rate changes in lung cancer related to incidence, treatment, and survival.

From 1973 to 2015, the average incidence of lung cancer was 59.0/100,000 person-years. The incidence increased initially, reached a peak in 1992, and then gradually decreased. A higher incidence rate was observed in males than in females and in black patients than in other racial groups. Since 1985, adenocarcinoma became the most prevalent histopathological type. The surgical rate for lung cancer was about 25%, and treatment with chemotherapy showed an increasing trend, while the radiotherapy rate was in downward trend. The surgical rate for non-small-cell lung cancer (NSCLC) was higher than that for small cell lung cancer (SCLC), while chemotherapy for SCLC far exceeded that for NSCLC. Treatment with chemotherapy and radiotherapy for advanced stage had higher rate than early stage. The 5-year relative survival rate of lung cancer increased with time, but <21%.

In the past four decades, the lung cancer incidence increased initially and then gradually decreased. Surgical rate experienced a fluctuant reduction, while the chemotherapy rate was in upward trend. The 5-year relative survival rate increased with years, but was still low.

Cigarette smoking and lung cancer--relative risk estimates for the major histological types from a pooled analysis of case-control studies.

Beate Pesch, Benjamin Kendzia, Per Gustavsson … (2012)
Lung cancer is mainly caused by smoking, but the quantitative relations between smoking and histologic subtypes of lung cancer remain inconclusive. By using one of the largest lung cancer datasets ever assembled, we explored the impact of smoking on risks of the major cell types of lung cancer. This pooled analysis included 13,169 cases and 16,010 controls from Europe and Canada. Studies with population controls comprised 66.5% of the subjects. Adenocarcinoma (AdCa) was the most prevalent subtype in never smokers and in women. Squamous cell carcinoma (SqCC) predominated in male smokers. Age-adjusted odds ratios (ORs) were estimated with logistic regression. ORs were elevated for all metrics of exposure to cigarette smoke and were higher for SqCC and small cell lung cancer (SCLC) than for AdCa. Current male smokers with an average daily dose of >30 cigarettes had ORs of 103.5 (95% confidence interval (CI): 74.8-143.2) for SqCC, 111.3 (95% CI: 69.8-177.5) for SCLC and 21.9 (95% CI: 16.6-29.0) for AdCa. In women, the corresponding ORs were 62.7 (95% CI: 31.5-124.6), 108.6 (95% CI: 50.7-232.8) and 16.8 (95% CI: 9.2-30.6), respectively. Although ORs started to decline soon after quitting, they did not fully return to the baseline risk of never smokers even 35 years after cessation. The major result that smoking exerted a steeper risk gradient on SqCC and SCLC than on AdCa is in line with previous population data and biological understanding of lung cancer development. Copyright © 2011 UICC.

J Lortet-Tieulent, I Soerjomataram, J Ferlay … (2014)
Trends in overall lung cancer incidence in different countries reflect the maturity of the smoking epidemic. Further understanding of the underlying causes for trends over time can be gained by assessing the trends by sex and histological subtype. We provide a temporal analysis of lung cancer incidence in 12 populations (11 countries), with a focus on cohort-specific trends for the main histological subtypes (squamous cell carcinomas (SCC), adenocarcinomas (AdC), and small cell carcinoma).

Valentina I Petkov, Denise Lewis, Anne-Michelle Noone … (2017)
Background: Cancers are heterogeneous, comprising distinct tumor subtypes. Therefore, presenting the burden of cancer in the population and trends over time by these tumor subtypes is important to identify patterns and differences in the occurrence of these subtypes, especially to generalize findings to the U.S. general population.Methods: Using SEER Cancer Registry Data, we present incidence rates according to subtypes for diagnosis years (1992-2013) among men and women for five major cancer sites: breast (female only), esophagus, kidney and renal pelvis, lung and bronchus, and thyroid. We also describe estimates of 5-year relative survival according to subtypes and diagnosis year (1992-2008). We used Joinpoint models to identify years when incidence rate trends changed slope. Finally, recent 5-year age-adjusted incidence rates (2009-2013) are presented for each subtype by race and age.Results: Hormone receptor-positive and HER2-negative was the most common subtype (about 74%) of breast cancers. Adenocarcinoma made up about 69% of esophagus cases among men. Adenocarcinoma also is the most common lung subtype (43% in men and 52% in women). Ninety percent of thyroid subtypes were papillary. Distinct incidence and survival patterns emerged by these subtypes over time among men and women.Conclusions: Histologic or molecular subtype revealed different incidence and/or survival trends that are masked when cancer is considered as a single disease on the basis of anatomic site.Impact: Presenting incidence and survival trends by subtype, whenever possible, is critical to provide more detailed and meaningful data to patients, providers, and the public. Cancer Epidemiol Biomarkers Prev; 26(4); 632-41. ©2016 AACR.