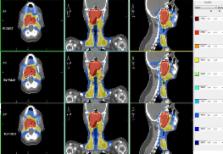 DA-VMAT showed better conformity over target dose and spared the OARs better or equal to IMRT. SA-VMAT could not spare the OARs well. DA-VMAT offered shorter delivery time than IMRT without compromising the plan quality.

The American Joint Committee on Cancer: the 7th edition of the AJCC cancer staging manual and the future of TNM.

C Compton,  Albert Edge (2010)
The American Joint Committee on Cancer and the International Union for Cancer Control update the tumor-node-metastasis (TNM) cancer staging system periodically. The most recent revision is the 7th edition, effective for cancers diagnosed on or after January 1, 2010. This editorial summarizes the background of the current revision and outlines the major issues revised. Most notable are the marked increase in the use of international datasets for more highly evidenced-based changes in staging, and the enhanced use of nonanatomic prognostic factors in defining the stage grouping. The future of cancer staging lies in the use of enhanced registry data standards to support personalization of cancer care through cancer outcome prediction models and nomograms.

A technique for the quantitative evaluation of dose distributions.

This work is licensed under a Creative Commons Attribution-NonCommercial 4.0 International License