Effect of background long-acting beta 2-agonist therapy on the efficacy and safety of a novel, nebulized glycopyrrolate in subjects with moderate-to-very-severe COPD 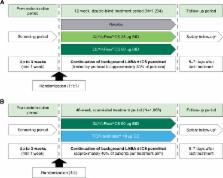 In two 12-week placebo-controlled studies (GOLDEN 3 and GOLDEN 4) and one 48-week, open-label active-controlled study (GOLDEN 5), a total of 2,379 subjects were stratified by background LABA use (LABA-yes: n=861; LABA-no: n=1,518) and randomized to placebo vs GLY 25 or 50 µg twice daily, or GLY 50 µg twice daily vs tiotropium (TIO) 18 µg once daily. Lung function, patient-reported outcomes, exacerbations, and safety were assessed.

Compared with placebo, pooled data from the 12-week studies showed significant improvements from baseline with GLY 25 and 50 µg across LABA subgroups in trough FEV 1 (LABA-yes: 0.101 and 0.110 L; LABA-no: 0.092 and 0.101 L, respectively; P<0.001) and St George’s Respiratory Questionnaire total score (SGRQ; LABA-yes: −2.957 and −3.888; LABA-no: −3.301 and −2.073, respectively; P<0.05). Incidence of treatment-emergent adverse events (TEAEs) was similar in LABA subgroups, and lower in GLY 25 µg vs placebo. In the 48-week active-controlled study, GLY and TIO both showed improvement from baseline across LABA subgroups in FEV 1 (LABA-yes: 0.106 and 0.092 L; LABA-no: 0.096 and 0.096 L, respectively) and in SGRQ total score (LABA-yes: −5.190 and −3.094; LABA-no: −4.368 and −4.821, respectively). Incidence of TEAEs was similar between GLY and TIO, and across LABA subgroups. Exacerbation rates were similar across treatments and LABA subgroups, and cardiovascular events of special interest were more frequent in the LABA-no subgroup. Nebulized GLY, combined with LABA, did not generate any additional safety signals.

Nebulized GLY demonstrated efficacy and was well tolerated up to 48 weeks in subjects with COPD with/without background LABA.

Tiotropium versus salmeterol for the prevention of exacerbations of COPD.

Hendrik Schmidt,  K. F. Rabe,  Claus Vogelmeier … (2011)
Treatment guidelines recommend the use of inhaled long-acting bronchodilators to alleviate symptoms and reduce the risk of exacerbations in patients with moderate-to-very-severe chronic obstructive pulmonary disease (COPD) but do not specify whether a long-acting anticholinergic drug or a β(2)-agonist is the preferred agent. We investigated whether the anticholinergic drug tiotropium is superior to the β(2)-agonist salmeterol in preventing exacerbations of COPD. In a 1-year, randomized, double-blind, double-dummy, parallel-group trial, we compared the effect of treatment with 18 μg of tiotropium once daily with that of 50 μg of salmeterol twice daily on the incidence of moderate or severe exacerbations in patients with moderate-to-very-severe COPD and a history of exacerbations in the preceding year. A total of 7376 patients were randomly assigned to and treated with tiotropium (3707 patients) or salmeterol (3669 patients). Tiotropium, as compared with salmeterol, increased the time to the first exacerbation (187 days vs. 145 days), with a 17% reduction in risk (hazard ratio, 0.83; 95% confidence interval [CI], 0.77 to 0.90; P<0.001). Tiotropium also increased the time to the first severe exacerbation (hazard ratio, 0.72; 95% CI, 0.61 to 0.85; P<0.001), reduced the annual number of moderate or severe exacerbations (0.64 vs. 0.72; rate ratio, 0.89; 95% CI, 0.83 to 0.96; P=0.002), and reduced the annual number of severe exacerbations (0.09 vs. 0.13; rate ratio, 0.73; 95% CI, 0.66 to 0.82; P<0.001). Overall, the incidence of serious adverse events and of adverse events leading to the discontinuation of treatment was similar in the two study groups. There were 64 deaths (1.7%) in the tiotropium group and 78 (2.1%) in the salmeterol group. These results show that, in patients with moderate-to-very-severe COPD, tiotropium is more effective than salmeterol in preventing exacerbations. (Funded by Boehringer Ingelheim and Pfizer; ClinicalTrials.gov number, NCT00563381.).

Anthony J Guarascio,  Shaunta´M. Ray,  Christopher Finch … (2013)
Chronic obstructive pulmonary disease (COPD) is the third most common cause of death in the USA. In 2010, the cost of COPD in the USA was projected to be approximately US$50 billion, which includes $20 billion in indirect costs and $30 billion in direct health care expenditures. These costs can be expected to continue to rise with this progressive disease. Costs increase with increasing severity of disease, and hospital stays account for the majority of these costs. Patients are diagnosed with COPD following a multifactorial assessment that includes spirometry, clinical presentation, symptomatology, and risk factors. Smoking cessation interventions are the most influential factor in COPD management. The primary goal of chronic COPD management is stabilization of chronic disease and prevention of acute exacerbations. Bronchodilators are the mainstay of COPD therapy. Patients with few symptoms and low exacerbation risk should be treated with a short-acting bronchodilator as needed for breathlessness. Progression of symptoms, as well as possible decline in forced expiratory volume in the first second of expiration (FEV1), warrant the use of long-acting bronchodilators. For patients with frequent exacerbations with or without consistent symptoms, inhaled corticosteroids should be considered in addition to a long-acting beta2-agonist (LABA) or long-acting muscarinic antagonist (LAMA) and may even consist of “triple therapy” with all three agents with more severe disease. Phosphodiesterase-4 inhibitors may be an option in patients with frequent exacerbations and symptoms of chronic bronchitis. In addition to a variety of novel ultra-LABAs, LAMAs and combination bronchodilator and inhaled corticosteroid (ICS) therapies, other bronchodilators with a variety of mechanisms are also being considered, to expand therapeutic options for the treatment of COPD. With more than 50 new medications in the pipeline for the treatment of COPD, optimal management will continue to evolve and grow more complex as benefits of therapy are balanced with the limitations and needs of each patient.