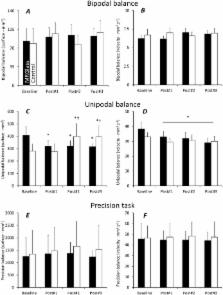 We evaluated the effects of a mixed reality (MR) head-mounted deviceon some cognitiveand physiological functions during 90 min tasks in an attempt to determine their safety for workers.

A total of 12 volunteers performed 90-min intellectual and manual tasks with and without MR glasses. Balance, Stroop, and memory tests were conducted before, during and after these tasks. Heart rate and electromyographic activity of some muscles were recorded. A survey was used to determine subjective fatigue, pain, or discomfort.

Accordingly, we concluded that the MR glasses under investigation (Hololens) can be used safely. An appropriate setup and familiarization are needed to optimize use.

L M Nashner,  F. B. Horak (1986)
We studied the extent to which automatic postural actions in standing human subjects are organized by a limited repertoire of central motor programs. Subjects stood on support surfaces of various lengths, which forced them to adopt different postural movement strategies to compensate for the same external perturbations. We assessed whether a continuum or a limited set of muscle activation patterns was used to produce different movement patterns and the extent to which movement patterns were influenced by prior experience. Exposing subjects standing on a normal support surface to brief forward and backward horizontal surface perturbations elicited relatively stereotyped patterns of leg and trunk muscle activation with 73- to 110-ms latencies. Activity began in the ankle joint muscles and then radiated in sequence to thigh and then trunk muscles on the same dorsal or ventral aspect of the body. This activation pattern exerted compensatory torques about the ankle joints, which restored equilibrium by moving the body center of mass forward or backward. This pattern has been termed the ankle strategy because it restores equilibrium by moving the body primarily around the ankle joints. To successfully maintain balance while standing on a support surface short in relation to foot length, subjects activated leg and trunk muscles at similar latencies but organized the activity differently. The trunk and thigh muscles antagonistic to those used in the ankle strategy were activated in the opposite proximal-to-distal sequence, whereas the ankle muscles were generally unresponsive. This activation pattern produced a compensatory horizontal shear force against the support surface but little, if any, ankle torque. This pattern has been termed the hip strategy, because the resulting motion is focused primarily about the hip joints. Exposing subjects to horizontal surface perturbations while standing on support surfaces intermediate in length between the shortest and longest elicited more complex postural movements and associated muscle activation patterns that resembled ankle and hip strategies combined in different temporal relations. These complex postural movements were executed with combinations of torque and horizontal shear forces and motions of ankle and hip joints. During the first 5-20 practice trials immediately following changes from one support surface length to another, response latencies were unchanged. The activation patterns, however, were complex and resembled the patterns observed during well-practiced stance on surfaces of intermediate lengths.(ABSTRACT TRUNCATED AT 400 WORDS)

Corey Bohil,  Bradly Alicea,  Frank Biocca (2011)
Virtual reality (VR) environments are increasingly being used by neuroscientists to simulate natural events and social interactions. VR creates interactive, multimodal sensory stimuli that offer unique advantages over other approaches to neuroscientific research and applications. VR's compatibility with imaging technologies such as functional MRI allows researchers to present multimodal stimuli with a high degree of ecological validity and control while recording changes in brain activity. Therapists, too, stand to gain from progress in VR technology, which provides a high degree of control over the therapeutic experience. Here we review the latest advances in VR technology and its applications in neuroscience research.

Funded by: Framatome
Framatome provided financial support to conduct the study. The funders had no role in study design, data collection and analysis, decision to publish, or preparation of the manuscript.