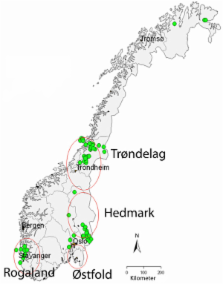 The prevalence of influenza A virus infection, and the distribution of different subtypes of the virus, were studied in 1529 ducks and 1213 gulls shot during ordinary hunting from August to December in two consecutive years, 2006 and 2007, in Norway. The study was based on molecular screening of cloacal and tracheal swabs, using a pan-influenza A RT-PCR. Samples found to be positive for influenza A virus were screened for the H5 subtype, using a H5 specific RT-PCR, and, if negative, further subtyped by a RT-PCR for the 3'-part of the hemagglutinin (HA) gene, encompassing almost the entire HA2, and the full-length of the neuraminidase (NA) gene, followed by sequencing and characterization. The highest prevalence (12.8%) of infection was found in dabbling ducks (Eurasian Wigeon, Common Teal and Mallard). Diving ducks (Common Goldeneye, Common Merganser, Red-breasted Merganser, Common Scoter, Common Eider and Tufted Duck) showed a lower prevalence (4.1%). In gulls (Common Gull, Herring Gull, Black-headed Gull, Lesser Black-headed Gull, Great Black-backed Gull and Kittiwake) the prevalence of influenza A virus was 6.1%. The infection prevalence peaked during October for ducks, and October/November for gulls. From the 16 hemagglutinin subtypes known to infect wild birds, 13 were detected in this study. Low pathogenic H5 was found in 17 dabbling ducks and one gull.

AHRO Review of Pharmaceutics and Pharmacology

Ron Fouchier, Vincent Munster, Anders Wallensten … (2005)
In wild aquatic birds and poultry around the world, influenza A viruses carrying 15 antigenic subtypes of hemagglutinin (HA) and 9 antigenic subtypes of neuraminidase (NA) have been described. Here we describe a previously unidentified antigenic subtype of HA (H16), detected in viruses circulating in black-headed gulls in Sweden. In agreement with established criteria for the definition of antigenic subtypes, hemagglutination inhibition assays and immunodiffusion assays failed to detect specific reactivity between H16 and the previously described subtypes H1 to H15. Genetically, H16 HA was found to be distantly related to H13 HA, a subtype also detected exclusively in shorebirds, and the amino acid composition of the putative receptor-binding site of H13 and H16 HAs was found to be distinct from that in HA subtypes circulating in ducks and geese. The H16 viruses contained NA genes that were similar to those of other Eurasian shorebirds but genetically distinct from N3 genes detected in other birds and geographical locations. The European gull viruses were further distinguishable from other influenza A viruses based on their PB2, NP, and NS genes. Gaining information on the full spectrum of avian influenza A viruses and creating reagents for their detection and identification will remain an important task for influenza surveillance, outbreak control, and animal and public health. We propose that sequence analyses of HA and NA genes of influenza A viruses be used for the rapid identification of existing and novel HA and NA subtypes.

A. Kilpatrick, Aleksei Chmura, David W. Gibbons … (2006)
The spread of highly pathogenic H5N1 avian influenza into Asia, Europe, and Africa has resulted in enormous impacts on the poultry industry and presents an important threat to human health. The pathways by which the virus has and will spread between countries have been debated extensively, but have yet to be analyzed comprehensively and quantitatively. We integrated data on phylogenetic relationships of virus isolates, migratory bird movements, and trade in poultry and wild birds to determine the pathway for 52 individual introduction events into countries and predict future spread. We show that 9 of 21 of H5N1 introductions to countries in Asia were most likely through poultry, and 3 of 21 were most likely through migrating birds. In contrast, spread to most (20/23) countries in Europe was most likely through migratory birds. Spread in Africa was likely partly by poultry (2/8 introductions) and partly by migrating birds (3/8). Our analyses predict that H5N1 is more likely to be introduced into the Western Hemisphere through infected poultry and into the mainland United States by subsequent movement of migrating birds from neighboring countries, rather than from eastern Siberia. These results highlight the potential synergism between trade and wild animal movement in the emergence and pandemic spread of pathogens and demonstrate the value of predictive models for disease control.