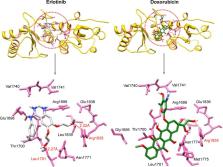 The amide derivatives of nonsteroidal anti-inflammatory drugs have been reported to possess antitumor activity. The present work describes the synthesis of dexibuprofen amide analogues ( 4a–j) as potential anticancer agents.

The brine shrimp lethality assay results showed that all of the synthesized compounds are non-toxic to shrimp larvae. The inhibitory effects on tumor growth were evaluated and it was observed that N-(2,5-dichlorophenyl)-2-(4-isobutylphenyl) propionamide ( 4e) and N-(2-chlorophenyl)-2-(4-isobutylphenyl) propionamide ( 4g) exhibited excellent antitumor activity compared to all other derivatives. The compound 4e bearing 2,5-dichloro substituted phenyl ring and 4g possesses 2-chloro substituted phenyl ring exhibited 100% inhibition of the tumor growth. The anticancer activity was evaluated against breast carcinoma cell line (MCF-7) and it was observed that derivative 4e exhibited excellent growth inhibition of cancer cells with IC 50 value of 0.01±0.002 µm, which is better than the standard drugs. The docking studies against breast cancer type 1 susceptibility protein BRCA1 (PDBID 3K0H) exhibited good binding affinities, which are in good agreement with the wet lab results. The compounds 4e and 4g showed the binding energy values of −6.39 and −6.34 Kcal/mol, respectively. The molecular dynamic (MD) simulation was also carried out to evaluate the residual flexibility of the best docking complexes of compounds 4e and 4g. The MD simulation analysis assured that the 4e formed a more stable complex with the target protein than the 4g. The synthesized amide derivatives exhibited were devoid of gastrointestinal side effects and no cytotoxic effects against human normal epithelial breast cell line (MCF-12A) were found.

Based upon our wet lab and dry lab findings we propose that dexibuprofen analogue 4e may serve as a lead structure for the design of more potent anticancer drugs.

Simon C. Lovell,  Ian Davis,  W Bryan Arendall … (2003)
Geometrical validation around the Calpha is described, with a new Cbeta measure and updated Ramachandran plot. Deviation of the observed Cbeta atom from ideal position provides a single measure encapsulating the major structure-validation information contained in bond angle distortions. Cbeta deviation is sensitive to incompatibilities between sidechain and backbone caused by misfit conformations or inappropriate refinement restraints. A new phi,psi plot using density-dependent smoothing for 81,234 non-Gly, non-Pro, and non-prePro residues with B < 30 from 500 high-resolution proteins shows sharp boundaries at critical edges and clear delineation between large empty areas and regions that are allowed but disfavored. One such region is the gamma-turn conformation near +75 degrees,-60 degrees, counted as forbidden by common structure-validation programs; however, it occurs in well-ordered parts of good structures, it is overrepresented near functional sites, and strain is partly compensated by the gamma-turn H-bond. Favored and allowed phi,psi regions are also defined for Pro, pre-Pro, and Gly (important because Gly phi,psi angles are more permissive but less accurately determined). Details of these accurate empirical distributions are poorly predicted by previous theoretical calculations, including a region left of alpha-helix, which rates as favorable in energy yet rarely occurs. A proposed factor explaining this discrepancy is that crowding of the two-peptide NHs permits donating only a single H-bond. New calculations by Hu et al. [Proteins 2002 (this issue)] for Ala and Gly dipeptides, using mixed quantum mechanics and molecular mechanics, fit our nonrepetitive data in excellent detail. To run our geometrical evaluations on a user-uploaded file, see MOLPROBITY (http://kinemage.biochem.duke.edu) or RAMPAGE (http://www-cryst.bioc.cam.ac.uk/rampage). Copyright 2003 Wiley-Liss, Inc.

A. Monks,  D Scudiero,  P Skehan … (1991)
We describe here the development and implementation of a pilot-scale, in vitro, anticancer drug screen utilizing a panel of 60 human tumor cell lines organized into subpanels representing leukemia, melanoma, and cancers of the lung, colon, kidney, ovary, and central nervous system. The ultimate goal of this disease-oriented screen is to facilitate the discovery of new compounds with potential cell line-specific and/or subpanel-specific antitumor activity. In the current screening protocol, each cell line is inoculated onto microtiter plates, then preincubated for 24-28 hours. Subsequently, test agents are added in five 10-fold dilutions and the culture is incubated for an additional 48 hours. For each test agent, a dose-response profile is generated. End-point determinations of the cell viability or cell growth are performed by in situ fixation of cells, followed by staining with a protein-binding dye, sulforhodamine B (SRB). The SRB binds to the basic amino acids of cellular macromolecules; the solubilized stain is measured spectrophotometrically to determine relative cell growth or viability in treated and untreated cells. Following the pilot screening studies, a screening rate of 400 compounds per week has been consistently achieved.