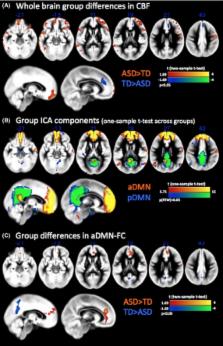 Neuroimaging studies can shed light on the neurobiological underpinnings of autism spectrum disorders (ASD). Studies of the resting brain have shown both altered baseline metabolism from PET/SPECT and altered functional connectivity (FC) of intrinsic brain networks based on resting-state fMRI. To date, however, no study has investigated these two physiological parameters of resting brain function jointly, or explored the relationship between these measures and ASD symptom severity.

A pattern of altered resting perfusion was found in ASD versus TD children including frontotemporal hyperperfusion and hypoperfusion in the dorsal anterior cingulate cortex. We found increased local FC in the anterior module of the default mode network (DMN) accompanied by decreased CBF in the same area. In our cohort, both alterations were associated with greater social impairments as assessed with the Social Responsiveness Scale (SRS-total T scores). While FC was correlated with CBF in TD children, this association between FC and baseline perfusion was disrupted in children with ASD. Furthermore, there was reduced long-range FC between anterior and posterior modules of the DMN in children with ASD.

Taken together, the findings of this study – the first to jointly assess resting CBF and FC in ASD – highlight new avenues for identifying novel imaging markers of ASD symptomatology.

Rich-club organization of the human connectome.

Martijn P. van den Heuvel, Olaf Sporns (2011)
The human brain is a complex network of interlinked regions. Recent studies have demonstrated the existence of a number of highly connected and highly central neocortical hub regions, regions that play a key role in global information integration between different parts of the network. The potential functional importance of these "brain hubs" is underscored by recent studies showing that disturbances of their structural and functional connectivity profile are linked to neuropathology. This study aims to map out both the subcortical and neocortical hubs of the brain and examine their mutual relationship, particularly their structural linkages. Here, we demonstrate that brain hubs form a so-called "rich club," characterized by a tendency for high-degree nodes to be more densely connected among themselves than nodes of a lower degree, providing important information on the higher-level topology of the brain network. Whole-brain structural networks of 21 subjects were reconstructed using diffusion tensor imaging data. Examining the connectivity profile of these networks revealed a group of 12 strongly interconnected bihemispheric hub regions, comprising the precuneus, superior frontal and superior parietal cortex, as well as the subcortical hippocampus, putamen, and thalamus. Importantly, these hub regions were found to be more densely interconnected than would be expected based solely on their degree, together forming a rich club. We discuss the potential functional implications of the rich-club organization of the human connectome, particularly in light of its role in information integration and in conferring robustness to its structural core.

J. Rubenstein, M M Merzenich (2003)
Autism is a severe neurobehavioral syndrome, arising largely as an inherited disorder, which can arise from several diseases. Despite recent advances in identifying some genes that can cause autism, its underlying neurological mechanisms are uncertain. Autism is best conceptualized by considering the neural systems that may be defective in autistic individuals. Recent advances in understanding neural systems that process sensory information, various types of memories and social and emotional behaviors are reviewed and compared with known abnormalities in autism. Then, specific genetic abnormalities that are linked with autism are examined. Synthesis of this information leads to a model that postulates that some forms of autism are caused by an increased ratio of excitation/inhibition in sensory, mnemonic, social and emotional systems. The model further postulates that the increased ratio of excitation/inhibition can be caused by combinatorial effects of genetic and environmental variables that impinge upon a given neural system. Furthermore, the model suggests potential therapeutic interventions.