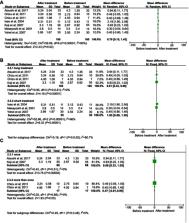 Aim: Malnutrition is one of the most common complications in patients with liver cirrhosis. Abnormal energy substrate metabolism may contribute to aggravation of malnutrition. Late evening snack (LESs) supplementation has been recommended as an intervention to reduce starvation time and improve nutritional status. Published studies have analyzed the effect of LESs on the branched-chain amino acid (BCAA)/tyrosine ratio (BTR) and oxidation rate of fat and carbohydrate in patients with liver cirrhosis.

Methods: We searched PubMed, Cochrane Library, Web of Science and Embase for relevant research from January 2000 to October 2018. The primary outcome for this analysis was changes in BTR and fat and carbohydrate oxidation in patients with liver cirrhosis.

A practical approach to nutritional screening and assessment in cirrhosis.

Marina Mourtzakis,  Maitreyi Raman,  Manuela Merli … (2017)
Malnutrition is one of the most common complications of cirrhosis, associated with an increased risk of morbidity and mortality. As a potentially modifiable condition, it is of particular importance to identify malnourished patients so that nutritional therapy can be instituted. Nutrition screening and assessment are infrequently performed in patients with cirrhosis. The reasons for this are multifactorial, including the absence of a validated "rapid" screening tool, multiple definitions of what constitutes malnutrition, and challenges with interpreting body composition and laboratory results in the setting of volume overload and liver dysfunction. This article summarizes the clinically relevant evidence and presents key issues, tools, and clinical options that are applicable to patients with cirrhosis. The definition, etiology, and clinically relevant outcomes associated with malnutrition are reviewed. Rapid nutritional screening is differentiated from more detailed nutritional assessment. Nutritional assessment in special populations, including women and the obese, and the role of inflammation are discussed. Multicenter studies using a common nutritional screening/assessment strategy are the next steps to fast-track adoption and implementation of nutrition-related evaluations into routine clinical practice. (Hepatology 2017;65:1044-1057).

Carl Muthu,  Anthony McCall,  Sachin Mathur … (2008)
Patients with liver cirrhosis exhibit early onset of gluconeogenesis after short-term fasting. This accelerated metabolic reaction to starvation may underlie their increased protein requirements and muscle depletion. A randomized controlled trial was conducted to test the hypothesis that provision of a late-evening nutritional supplement over a 12-month period would improve body protein stores in patients with cirrhosis. A total of 103 patients (68 male, 35 female; median age 51, range 28-74; Child-Pugh grading: 52A, 31B, 20C) were randomized to receive either daytime (between 0900 and 1900 hours) or nighttime (between 2100 and 0700 hours) supplementary nutrition (710 kcal/day). Primary etiology of liver disease was chronic viral hepatitis (67), alcohol (15), cholestatic (6), and other (15). Total body protein (TBP) was measured by neutron activation analysis at baseline, 3, 6, and 12 months. Total daily energy and protein intakes were assessed at baseline and at 3 months by comprehensive dietary recall. As a percentage of values predicted when well, TBP at baseline was similar for the daytime (85 +/- 2[standard error of the mean]%) and nighttime (84 +/- 2%) groups. For the nighttime group, significant increases in TBP were measured at 3 (0.38 +/- 0.10 kg, P = 0.0004), 6 (0.48 +/- 0.13 kg, P = 0.0007), and 12 months (0.53 +/- 0.17 kg, P = 0.003) compared to baseline. For the daytime group, no significant changes in TBP were seen. Daily energy and protein intakes at 3 months were higher than at baseline in both groups (P < 0.0001), and these changes did not differ between the groups. Provision of a nighttime feed to patients with cirrhosis results in body protein accretion equivalent to about 2 kg of lean tissue sustained over 12 months. This improved nutritional status may have important implications for the clinical course of these patients.

Francesca M. Trovato,  Giuseppe Martines,  Daniela Brischetto … (2016)
Fatty liver is associated with alcohol habits and/or overweight/obesity. We challenged several lifestyle features associated with fatty liver and, particularly, with non-alcoholic fatty liver disease (NAFLD). Among them, sleep shortage as a result of nightlife habits and a preference for plus-size fashion were assessed. The latter consists of fashionable plus-sized clothing for actual individuals' size and reflects a frequent attitude of some social or age groups, conceivably indicating more global and widespread trend and behaviour.