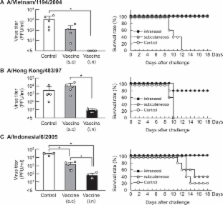 An increasing number of infections of highly pathogenic avian influenza virus (H5N1) in humans has been reported in South-East Asia and other areas of the world. High mortality (>60%) of this viral infection and its pathosis of systemic infection are features of this new human disease. Moreover, there is great concern that this avian H5N1 virus could cause a pandemic of new influenza in humans, once it acquires the ability for human to human transmission. To prevent such highly contagious infectious diseases as influenza, it is essential to prepare effective vaccines. Especially in the case of new influenza virus, we cannot predict the strain which will cause the pandemic. In such a situation, a vaccine that induces cross-protective immunity against variant viruses is extremely important. However currently used parenteral seasonal influenza vaccine is strain-specific, and is less effective against variant viruses. In order to overcome the weakness of current vaccines we need to learn from the immune responses induced by natural infection with influenza viruses. In the case of mucosally acquired acute respiratory infection such as influenza, mucosal immunity induced by natural infection plays important role in protection against the infection, as mucosal secretory IgA antibody plays an important role in cross-protection. In this review we describe the advantages and development of mucosal vaccine against highly pathogenic H5N1 influenza viruses.

Assessment of inactivated influenza-A vaccine after three outbreaks of influenza A at Christ's Hospital.

T Hoskins,  J Davies,  William Smith … (1979)
The boys of Christ's Hospital experienced outbreaks of influenza A in 1972 (A/England/42/72), in 1974 (A/Port Chalmers), and in 1976 (A/Victoria). In each outbreak, the protective effect of inactivated influenza-A vaccine was limited to those boys, not already immune, who were vaccinated for the first time with the most up-to-date strain. Revaccination with the same strain did not increase the degree of protection, and revaccination with a later strain did not afford protection against subsequent challenge. The cummulative attack-rate in the three outbreaks was similar in all groups irrespective of vaccination history. These observations suggest that annual revaccination with inactivated influenza-A vaccine confers no long-term advantage.

Yasuko Asahi-Ozaki,  Shigeyuki Itamura,  Takeshi Ichinohe … (2006)
Attenuated recombinant H5N1 influenza virus was constructed to develop a safe H5N1 influenza vaccine. The immunogenicity and protective effect of the vaccine prepared from haemagglutinin-modified recombinant H5N1 influenza virus was evaluated in mice intranasally co-administered with cholera toxin B subunit containing a trace amount of holotoxin (CTB*), synthetic double-stranded RNA, poly (I:C) or chitin microparticles (CMP) as adjuvants. Intranasal administration of recombinant H5 HA split vaccine with CTB* or poly(I:C) and/or CMP elicited an immunological response with both anti-H5 HA IgA in the nasal wash and anti-H5 HA IgG antibody in the serum, and showed a protective against lethal H5N1 A/Hong Kong/483/97 (HK483) infection. We also demonstrated that intranasal co-administration of antigen with both poly (I:C) and CMP enhanced the expression of Toll-like receptor (TLR) 3, TLR7 in the spleen. These results indicate that poly (I:C) and CMP are highly effective as mucosal adjuvants for use with the nasal H5N1 vaccine.

Upregulation of the 2-5A synthetase/RNase L antiviral pathway associated with chronic fatigue syndrome.

R J Suhadolnik,  N L Reichenbach,  P Hitzges … (1994)
Levels of 2',5'-oligoadenylate (2-5A) synthetase, bioactive 2-5A, and RNase L were measured in extracts of peripheral blood mononuclear cells (PBMCs) from 15 individuals with chronic fatigue syndrome (CFS) before and during therapy with the biological response modifier poly(I).poly(C12U) and were compared with levels in healthy controls. Patients differed significantly from controls in having a lower mean basal level of latent 2-5A synthetase (P < .0001), a higher pretreatment level of bioactive 2-5A (P = .002), and a higher level of pretherapy RNase L activity (P < .0001). PBMC extracts from 10 persons with CFS had a mean basal level of activated 2-5A synthetase higher than the corresponding control value (P = .009). All seven pretherapy PBMC extracts tested were positive for the replication of human herpesvirus 6 (HHV-6). Therapy with poly(I).poly(C12U) resulted in a significant decrease in HHV-6 activity (P < .01) and in downregulation of the 2-5A synthetase/RNase L pathway in temporal association with clinical and neuropsychological improvement. The upregulated 2-5A pathway in CFS before therapy is consistent with an activated immune state and a role for persistent viral infection in the pathogenesis of CFS. The response to therapy suggests direct or indirect antiviral activity of poly(I).poly(C12U) in this situation.