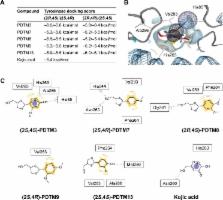 The authors designed and synthesized 17 (2-substituted phenyl-1,3-dithiolan-4-yl) methanol (PDTM) derivatives to find a new chemical scaffold, showing excellent tyrosinase-inhibitory activity. Their tyrosinase-inhibitory activities were evaluated against mushroom tyrosinase at 50 μM, and five of the PDTM derivatives (PDTM3, PDTM7–PDTM9, and PDTM13) were found to inhibit mushroom tyrosinase more than kojic acid or arbutin, the positive controls. Of seventeen PDTMs, PDTM3 (half-maximal inhibitory concentration 13.94±1.76 μM), with a 2,4-dihydroxyphenyl moiety, exhibited greatest inhibitory effects (kojic acid half-maximal inhibitory concentration 18.86±2.14 μM). Interestingly, PDTM compounds with no hydroxyl group, PDTM7–PDTM9, also had stronger inhibitory activities than kojic acid. In silico studies of interactions between tyrosinase and the five PDTMs suggested their binding affinities were closely related to their tyrosinase-inhibitory activities. Cell-based experiments performed using B16F10 mouse-skin melanoma cells showed that PDTM3 effectively inhibited melanogenesis and cellular tyrosinase activity. A cell-viability study conducted using B16F10 cells indicated that the antimelanogenic effect of PDTM3 was not attributable to its cytotoxicity. Kinetic studies showed PDTM3 competitively inhibited tyrosinase, indicating binding to the tyrosinase-active site. We found that PDTM3 with a new chemical scaffold could be a promising candidate for skin-whitening agents, and that the 1,3-dithiolane ring could be used as a chemical scaffold for potent tyrosinase inhibition.

Tyrosinase inhibitors from natural and synthetic sources: structure, inhibition mechanism and perspective for the future.

T. J. Kim,  H Uyama (2005)
Tyrosinase is known to be a key enzyme in melanin biosynthesis, involved in determining the color of mammalian skin and hair. Various dermatological disorders, such as melasma, age spots and sites of actinic damage, arise from the accumulation of an excessive level of epidermal pigmentation. In addition, unfavorable enzymatic browning of plant-derived foods by tyrosinase causes a decrease in nutritional quality and economic loss of food products. The inadequacy of current conventional techniques to prevent tyrosinase action encourages us to seek new potent tyrosinase inhibitors. This article overviews the various inhibitors obtained from natural and synthetic sources with their industrial importance.

Development and validation of a modular, extensible docking program: DOCK 5.

Regulation of melanogenesis--controversies and new concepts.

Sonal Kothari,  Dennis Spencer,  K U Schallreuter … (2008)
Despite many efforts, regulation of skin and hair pigmentation is still not fully understood. This article focuses mainly on controversial aspects in pigment cell biology which have emerged over the last decade. The central role of tyrosinase as the key enzyme in initiation of melanogenesis has been closely associated with the 6BH4 dependent phenylalanine hydroxylase (PAH) and tyrosine hydroxylase isoform I (THI) providing evidence for an old concept of the three enzyme theory in the initiation of the pigmentation process. In this context, it is noteworthy that intracellular L-phenylalanine uptake and turnover to L-tyrosine via PAH is vital for substrate supply of THI and tyrosinase. While PAH acts in the cytosol of melanocytes, THI and tyrosinase are sitting side by side in the melanosomal membrane. THI at low pH provides L-3,4-hydroxyphenylalanine L-DOPA which in turn is required for activation of met-tyrosinase. After an intramelanosomal pH change, possibly by the p-protein, has taken place, tyrosinase is subject to control by 6/7BH4 and the proopiomelanocortin (POMC) peptides alpha-MSH melanocyte stimulating hormone and beta-MSH in a receptor independent manner. cAMP is required for the activation of microphthalmia-associated transcription factor to induce expression of tyrosinase, for transcription of THI and for activation of PAH. The redundancy of the cAMP signal is discussed. Finally, we propose a novel mechanism involving H2O2 in the regulation of tyrosinase via p53 through transcription of hepatocyte nuclear factor 1alpha which in turn can also affect the POMC response.