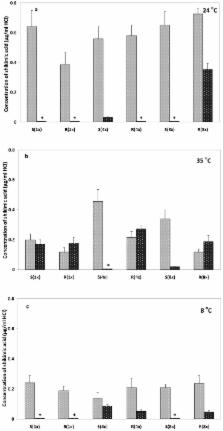 Conyza canadensis has been reported to be the most frequent weed species that evolved resistance to glyphosate in various parts of the world. The objective of the present study was to investigate the effect of environmental conditions (temperature and light) on the expression levels of the EPSPS gene and two major ABC- transporter genes ( M10 and M11) on glyphosate susceptible (GS) and glyphosate resistant (GR) horseweed populations, collected from several regions across Greece. Real-time PCR was conducted to determine the expression level of the aforementioned genes when glyphosate was applied at normal (1×; 533 g·a.e.·ha −1) and high rates (4×, 8×), measured at an early one day after treatment (DAT) and a later stage (four DAT) of expression. Plants were exposed to light or dark conditions, at three temperature regimes (8, 25, 35 °C). GR plants were made sensitive when exposed to 8 °C with light; those sensitized plants behaved biochemically (shikimate accumulation) and molecularly (expression of EPSPS and ABC-genes) like the GS plants. Results from the current study show the direct link between the environmental conditions and the induction level of the above key genes that likely affect the efficiency of the proposed mechanism of glyphosate resistance.

Stephen B. Powles,  Stephen Duke (2008)
Since its commercial introduction in 1974, glyphosate [N-(phosphonomethyl)glycine] has become the dominant herbicide worldwide. There are several reasons for its success. Glyphosate is a highly effective broad-spectrum herbicide, yet it is very toxicologically and environmentally safe. Glyphosate translocates well, and its action is slow enough to take advantage of this. Glyphosate is the only herbicide that targets 5-enolpyruvyl-shikimate-3-phosphate synthase (EPSPS), so there are no competing herbicide analogs or classes. Since glyphosate became a generic compound, its cost has dropped dramatically. Perhaps the most important aspect of the success of glyphosate has been the introduction of transgenic, glyphosate-resistant crops in 1996. Almost 90% of all transgenic crops grown worldwide are glyphosate resistant, and the adoption of these crops is increasing at a steady pace. Glyphosate/glyphosate-resistant crop weed management offers significant environmental and other benefits over the technologies that it replaces. The use of this virtually ideal herbicide is now being threatened by the evolution of glyphosate-resistant weeds. Adoption of resistance management practices will be required to maintain the benefits of glyphosate technologies for future generations. Copyright (c) 2008 Society of Chemical Industry.

Dale L Shaner,  William K Vencill,  Wenli Zhang … (2010)
The herbicide glyphosate became widely used in the United States and other parts of the world after the commercialization of glyphosate-resistant crops. These crops have constitutive overexpression of a glyphosate-insensitive form of the herbicide target site gene, 5-enolpyruvylshikimate-3-phosphate synthase (EPSPS). Increased use of glyphosate over multiple years imposes selective genetic pressure on weed populations. We investigated recently discovered glyphosate-resistant Amaranthus palmeri populations from Georgia, in comparison with normally sensitive populations. EPSPS enzyme activity from resistant and susceptible plants was equally inhibited by glyphosate, which led us to use quantitative PCR to measure relative copy numbers of the EPSPS gene. Genomes of resistant plants contained from 5-fold to more than 160-fold more copies of the EPSPS gene than did genomes of susceptible plants. Quantitative RT-PCR on cDNA revealed that EPSPS expression was positively correlated with genomic EPSPS relative copy number. Immunoblot analyses showed that increased EPSPS protein level also correlated with EPSPS genomic copy number. EPSPS gene amplification was heritable, correlated with resistance in pseudo-F(2) populations, and is proposed to be the molecular basis of glyphosate resistance. FISH revealed that EPSPS genes were present on every chromosome and, therefore, gene amplification was likely not caused by unequal chromosome crossing over. This occurrence of gene amplification as an herbicide resistance mechanism in a naturally occurring weed population is particularly significant because it could threaten the sustainable use of glyphosate-resistant crop technology.