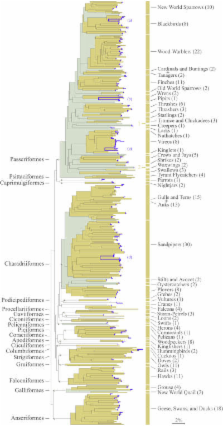 Short DNA sequences from a standardized region of the genome provide a DNA barcode for identifying species. Compiling a public library of DNA barcodes linked to named specimens could provide a new master key for identifying species, one whose power will rise with increased taxon coverage and with faster, cheaper sequencing. Recent work suggests that sequence diversity in a 648-bp region of the mitochondrial gene, cytochrome c oxidase I (COI), might serve as a DNA barcode for the identification of animal species. This study tested the effectiveness of a COI barcode in discriminating bird species, one of the largest and best-studied vertebrate groups. We determined COI barcodes for 260 species of North American birds and found that distinguishing species was generally straightforward. All species had a different COI barcode(s), and the differences between closely related species were, on average, 18 times higher than the differences within species. Our results identified four probable new species of North American birds, suggesting that a global survey will lead to the recognition of many additional bird species. The finding of large COI sequence differences between, as compared to small differences within, species confirms the effectiveness of COI barcodes for the identification of bird species. This result plus those from other groups of animals imply that a standard screening threshold of sequence difference (10× average intraspecific difference) could speed the discovery of new animal species. The growing evidence for the effectiveness of DNA barcodes as a basis for species identification supports an international exercise that has recently begun to assemble a comprehensive library of COI sequences linked to named specimens.

Can a single gene be used to identify all different animal species? An analysis of 255 North American birds shows that cytochrome c oxidase I might have this potential

D Bensasson (2001)
Nuclear copies of mitochondrial DNA (mtDNA) have contaminated PCR-based mitochondrial studies of over 64 different animal species. Since the last review of these nuclear mitochondrial pseudogenes (Numts) in animals, Numts have been found in 53 of the species studied. The recent evidence suggests that Numts are not equally abundant in all species, for example they are more common in plants than in animals, and also more numerous in humans than in Drosophila. Methods for avoiding Numts have now been tested, and several recent studies demonstrate the potential utility of Numt DNA sequences in evolutionary studies. As relics of ancient mtDNA, these pseudogenes can be used to infer ancestral states or root mitochondrial phylogenies. Where they are numerous and selectively unconstrained, Numts are ideal for the study of spontaneous mutation in nuclear genomes.

Phylogenetic structure of the prokaryotic domain: the primary kingdoms.

George Fox,  C Woese (1977)
A phylogenetic analysis based upon ribosomal RNA sequence characterization reveals that living systems represent one of three aboriginal lines of descent: (i) the eubacteria, comprising all typical bacteria; (ii) the archaebacteria, containing methanogenic bacteria; and (iii) the urkaryotes, now represented in the cytoplasmic component of eukaryotic cells.

W Symondson (2002)
In many situations prey choice by predators in the field cannot be established or quantified using direct observation. The remains of some prey may be visually identified in the guts and faeces of predators but not all predators ingest such hard remains and even those that do consume them may also ingest soft-bodies prey that leave no recognizable remnants. The result is, at best, a biased picture of prey choice. A range of molecular techniques and applications are reviewed that allow prey remains to be identified, often to the species and even stage level. These techniques, all of which are still in use, include enzyme electrophoresis, a range of immunological approaches using polyclonal and monoclonal antibodies to detect protein epitopes, and recently developed polymerase chain reaction (PCR)-based methods for detecting prey DNA. Analyses may be postmortem, on invertebrate and vertebrate predators collected from the field, or noninvasive assays of the remains in regurgitated bird pellets or vertebrate faeces. It was concluded that although monoclonal antibodies are currently the most effective method in use today, PCR-based techniques have proved to be highly effective and versatile in recent laboratory trials and are likely to rapidly displace all other approaches.

DOI: 10.1371/journal.pbio.0020312
PMC ID: 518999
PubMed ID: 15455034
Copyright statement: Copyright: © 2004 Hebert et al. This is an open-access article distributed under the terms of the Creative Commons Attribution License, which permits unrestricted use, distribution, and reproduction in any medium, provided the original work is properly cited