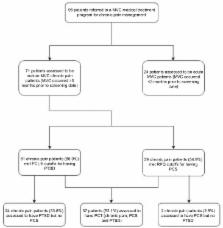 The polytrauma clinical triad (PCT) is a complex disorder composed of three comorbid diagnoses of chronic pain, post-traumatic stress disorder (PTSD), and postconcussion syndrome (PCS). PCT has been documented in veterans returning from deployment, but this is the first report on PCT prevalence in nonmilitary personnel after a motor vehicle collision (MVC).

Standard and modified RPQ scores yielded PCS prevalence rates of 100% and 54.9% in our sample, respectively. Results suggest that a modified RPQ score, limited to visual and vestibular symptoms, may be more useful PCS screening criteria in patients with chronic pain. PTSD screening criteria on the PCL-5 were met by 85.9% of the patients. More than half of the patients referred for chronic pain after MVC met criteria for PCT (52.1%). Patients who met PCT criteria reported worse headache, overall pain, and sleep quality outcomes.

Among patients in our sample with chronic pain after MVC, more than half met criteria for PCT. A modified approach to RPQ scoring limited to visual and vestibular symptoms may be required to screen for PCS in these patients.

The Rivermead Post Concussion Symptoms Questionnaire: a measure of symptoms commonly experienced after head injury and its reliability.

Stephen Moss,  Robert S. Crawford,  Isabelle King … (1995)
After head injuries, particularly mild or moderate ones, a range of post-concussion symptoms (PCS) are often reported by patients. Such symptoms may significantly affect patients' psychosocial functioning. To date, no measure of the severity of PCS has been developed. This study presents the Rivermead Post Concussion Symptoms Questionnaire (RPQ) as such a measure, derived from published material, and investigates its reliability. The RPQ's reliability was investigated under two experimental conditions. Study 1 examined its test-retest reliability when used as a self-report questionnaire at 7-10 days after injury. Forty-one head-injured patients completed an RPQ at 7-10 days following their head injury and again approximately 24 h later. Study 2 examined the questionnaire's inter-rater reliability when used as a measure administered by two separate investigators. Forty-six head-injured patients had an RPQ administered by an investigator at 6 months after injury. A second investigator readministered the questionnaire approximately 7 days later. Spearman rank correlation coefficients were calculated for ratings on the total symptom scores, and for individual items. High reliability was found for the total PCS scores under both experimental conditions (Rs = + 0.91 in study 1 and Rs = + 0.87 in study 2). Good reliability was also found for individual PCS items generally, although with some variation between different symptoms. The results are discussed in relation to the major difficulties involved when looking for appropriate experimental criteria against which measures of PCS can be validated.

Steven S Coughlin (1989)
The factors which contribute to bias due to differential recall between cases and controls in retrospective studies have been little studied. A review of the literature on recall accuracy suggests that the extent of inaccurate recall is related to characteristics of the exposure of interest and of the respondents, though a distinction must be drawn between recall which is biased and that which is simply inaccurate. Interviewing technique and the study protocol, including the design of questionnaires and the motivation of respondents, play a central role and are under the control of the investigator. The results of validation studies carried out to date suggest that the likelihood of recall bias may be greater when recall is poor in general.

,  A Hricik,  Hester F Lingsma … (2014)
Mild Traumatic Brain Injury (mTBI), or concussion, is a major public health concern. There is controversy in the literature regarding the true incidence of postconcussion syndrome (PCS), with the constellation of physical, cognitive, emotional, and sleep symptoms after mTBI. In the current study, we report on the incidence and evolution of PCS symptoms and patient outcomes after mTBI at 3, 6, and 12 months in a large, prospective cohort of mTBI patients. Participants were identified as part of the prospective, multi-center Transforming Research and Clinical Knowledge in Traumatic Brain Injury Study. The study population was mTBI patients (Glasgow Coma Scale score of 13-15) presenting to the emergency department, including patients with a negative head computed tomography discharged to home without admission to hospital; 375 mTBI subjects were included in the analysis. At both 6 and 12 months after mTBI, 82% (n=250 of 305 and n=163 of 199, respectively) of patients reported at least one PCS symptom. Further, 44.5 and 40.3% of patients had significantly reduced Satisfaction With Life scores at 6 and 12 months, respectively. At 3 months after injury, 33% of the mTBI subjects were functionally impaired (Glasgow Outcome Scale-Extended score ≤6); 22.4% of the mTBI subjects available for follow-up were still below full functional status at 1 year after injury. The term "mild" continues to be a misnomer for this patient population and underscores the critical need for evolving classification strategies for TBI for targeted therapy.