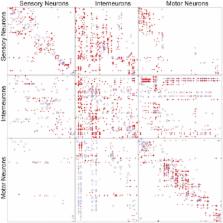 Despite recent interest in reconstructing neuronal networks, complete wiring diagrams on the level of individual synapses remain scarce and the insights into function they can provide remain unclear. Even for Caenorhabditis elegans, whose neuronal network is relatively small and stereotypical from animal to animal, published wiring diagrams are neither accurate nor complete and self-consistent. Using materials from White et al. and new electron micrographs we assemble whole, self-consistent gap junction and chemical synapse networks of hermaphrodite C. elegans. We propose a method to visualize the wiring diagram, which reflects network signal flow. We calculate statistical and topological properties of the network, such as degree distributions, synaptic multiplicities, and small-world properties, that help in understanding network signal propagation. We identify neurons that may play central roles in information processing, and network motifs that could serve as functional modules of the network. We explore propagation of neuronal activity in response to sensory or artificial stimulation using linear systems theory and find several activity patterns that could serve as substrates of previously described behaviors. Finally, we analyze the interaction between the gap junction and the chemical synapse networks. Since several statistical properties of the C. elegans network, such as multiplicity and motif distributions are similar to those found in mammalian neocortex, they likely point to general principles of neuronal networks. The wiring diagram reported here can help in understanding the mechanistic basis of behavior by generating predictions about future experiments involving genetic perturbations, laser ablations, or monitoring propagation of neuronal activity in response to stimulation.

Connectomics, the generation and analysis of neuronal connectivity data, stands to revolutionize neurobiology just as genomics has revolutionized molecular biology. Indeed, since neuronal networks are the physical substrates upon which neural functions are carried out, their structural properties are intertwined with the organization and logic of function. In this paper, we report a near-complete wiring diagram of the nematode Caenorhabditis elegans and present several analyses of its properties, finding many nonrandom features. We give novel visualizations and compute network statistics to enhance understanding of the reported data. We also use principled systems-theoretic methods to generate hypotheses on how biological function may arise from the reported neuronal network structure. The wiring diagram reported here can further be used to generate predictions about signal propagation in future perturbation, ablation, or artificial stimulation experiments.

Emergence of scaling in random networks

Zoltan Barabasi,  Albert Donnay,  Albert Dionise … (1999)
Systems as diverse as genetic networks or the World Wide Web are best described as networks with complex topology. A common property of many large networks is that the vertex connectivities follow a scale-free power-law distribution. This feature was found to be a consequence of two generic mechanisms: (i) networks expand continuously by the addition of new vertices, and (ii) new vertices attach preferentially to sites that are already well connected. A model based on these two ingredients reproduces the observed stationary scale-free distributions, which indicates that the development of large networks is governed by robust self-organizing phenomena that go beyond the particulars of the individual systems.

Identification and Classification of Hubs in Brain Networks

Olaf Sporns,  Christopher Honey,  Rolf Kötter (2007)
Brain regions in the mammalian cerebral cortex are linked by a complex network of fiber bundles. These inter-regional networks have previously been analyzed in terms of their node degree, structural motif, path length and clustering coefficient distributions. In this paper we focus on the identification and classification of hub regions, which are thought to play pivotal roles in the coordination of information flow. We identify hubs and characterize their network contributions by examining motif fingerprints and centrality indices for all regions within the cerebral cortices of both the cat and the macaque. Motif fingerprints capture the statistics of local connection patterns, while measures of centrality identify regions that lie on many of the shortest paths between parts of the network. Within both cat and macaque networks, we find that a combination of degree, motif participation, betweenness centrality and closeness centrality allows for reliable identification of hub regions, many of which have previously been functionally classified as polysensory or multimodal. We then classify hubs as either provincial (intra-cluster) hubs or connector (inter-cluster) hubs, and proceed to show that lesioning hubs of each type from the network produces opposite effects on the small-world index. Our study presents an approach to the identification and classification of putative hub regions in brain networks on the basis of multiple network attributes and charts potential links between the structural embedding of such regions and their functional roles.

Publisher ID: 10-PLCB-RA-2389R3
DOI: 10.1371/journal.pcbi.1001066
PMC ID: 3033362
PubMed ID: 21304930
Copyright statement: Varshney et al. This is an open-access article distributed under the terms of the Creative Commons Attribution License, which permits unrestricted use, distribution, and reproduction in any medium, provided the original author and source are credited.