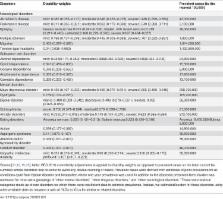 For each disorder, prevalence data were assembled from systematic literature reviews. DisMod-MR, a Bayesian meta-regression tool, was used to model prevalence by country, region, age, sex and year. Prevalence data were combined with disability weights derived from survey data to estimate years lived with disability (YLDs). Years lost to premature mortality (YLLs) were estimated by multiplying deaths occurring as a result of a given disorder by the reference standard life expectancy at the age death occurred. Disability-adjusted life years (DALYs) were computed as the sum of YLDs and YLLs.

Mental, neurological and substance use disorders contribute to a significant proportion of disease burden. Health systems can respond by implementing established, cost effective interventions, or by supporting the research necessary to develop better prevention and treatment options.

Joshua A Salomon,  Haidong Wang,  Michael Freeman … (2012)
Healthy life expectancy (HALE) summarises mortality and non-fatal outcomes in a single measure of average population health. It has been used to compare health between countries, or to measure changes over time. These comparisons can inform policy questions that depend on how morbidity changes as mortality decreases. We characterise current HALE and changes over the past two decades in 187 countries. Using inputs from the Global Burden of Disease Study (GBD) 2010, we assessed HALE for 1990 and 2010. We calculated HALE with life table methods, incorporating estimates of average health over each age interval. Inputs from GBD 2010 included age-specific information for mortality rates and prevalence of 1160 sequelae, and disability weights associated with 220 distinct health states relating to these sequelae. We computed estimates of average overall health for each age group, adjusting for comorbidity with a Monte Carlo simulation method to capture how multiple morbidities can combine in an individual. We incorporated these estimates in the life table by the Sullivan method to produce HALE estimates for each population defined by sex, country, and year. We estimated the contributions of changes in child mortality, adult mortality, and disability to overall change in population health between 1990 and 2010. In 2010, global male HALE at birth was 58·3 years (uncertainty interval 56·7-59·8) and global female HALE at birth was 61·8 years (60·1-63·4). HALE increased more slowly than did life expectancy over the past 20 years, with each 1-year increase in life expectancy at birth associated with a 0·8-year increase in HALE. Across countries in 2010, male HALE at birth ranged from 27·9 years (17·3-36·5) in Haiti, to 68·8 years (67·0-70·4) in Japan. Female HALE at birth ranged from 37·1 years (26·9-43·7) in Haiti, to 71·7 years (69·7-73·4) in Japan. Between 1990 and 2010, male HALE increased by 5 years or more in 42 countries compared with 37 countries for female HALE, while male HALE decreased in 21 countries and 11 for female HALE. Between countries and over time, life expectancy was strongly and positively related to number of years lost to disability. This relation was consistent between sexes, in cross-sectional and longitudinal analysis, and when assessed at birth, or at age 50 years. Changes in disability had small effects on changes in HALE compared with changes in mortality. HALE differs substantially between countries. As life expectancy has increased, the number of healthy years lost to disability has also increased in most countries, consistent with the expansion of morbidity hypothesis, which has implications for health planning and health-care expenditure. Compared with substantial progress in reduction of mortality over the past two decades, relatively little progress has been made in reduction of the overall effect of non-fatal disease and injury on population health. HALE is an attractive indicator for monitoring health post-2015. The Bill & Melinda Gates Foundation. Copyright © 2012 Elsevier Ltd. All rights reserved.

The Burden Attributable to Mental and Substance Use Disorders as Risk Factors for Suicide: Findings from the Global Burden of Disease Study 2010