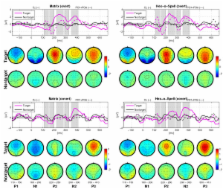 In a visual oddball paradigm, attention to an event usually modulates the event-related potential (ERP). An ERP-based brain-computer interface (BCI) exploits this neural mechanism for communication. Hitherto, it was unclear to what extent the accuracy of such a BCI requires eye movements (overt attention) or whether it is also feasible for targets in the visual periphery (covert attention). Also unclear was how the visual design of the BCI can be improved to meet peculiarities of peripheral vision such as low spatial acuity and crowding.

Healthy participants (N = 13) performed a copy-spelling task wherein they had to count target intensifications. EEG and eye movements were recorded concurrently. First, (c)overt attention was investigated by way of a target fixation condition and a central fixation condition. In the latter, participants had to fixate a dot in the center of the screen and allocate their attention to a target in the visual periphery. Second, the effect of visual speller layout was investigated by comparing the symbol Matrix to an ERP-based Hex-o-Spell, a two-levels speller consisting of six discs arranged on an invisible hexagon.

Both overt and covert attention can be used to drive an ERP-based BCI, but performance is markedly lower for covert attention. The Hex-o-Spell outperforms the Matrix, especially when eye movements are not permitted, illustrating that performance can be increased if one accounts for peculiarities of peripheral vision.

The N1 wave of the human electric and magnetic response to sound: a review and an analysis of the component structure.

Talking off the top of your head: toward a mental prosthesis utilizing event-related brain potentials.

Lawrence A. Farwell,  E Donchin,  L Farwell (1988)
This paper describes the development and testing of a system whereby one can communicate through a computer by using the P300 component of the event-related brain potential (ERP). Such a system may be used as a communication aid by individuals who cannot use any motor system for communication (e.g., 'locked-in' patients). The 26 letters of the alphabet, together with several other symbols and commands, are displayed on a computer screen which serves as the keyboard or prosthetic device. The subject focuses attention successively on the characters he wishes to communicate. The computer detects the chosen character on-line and in real time. This detection is achieved by repeatedly flashing rows and columns of the matrix. When the elements containing the chosen character are flashed, a P300 is elicited, and it is this P300 that is detected by the computer. We report an analysis of the operating characteristics of the system when used with normal volunteers, who took part in 2 experimental sessions. In the first session (the pilot study/training session) subjects attempted to spell a word and convey it to a voice synthesizer for production. In the second session (the analysis of the operating characteristics of the system) subjects were required simply to attend to individual letters of a word for a specific number of trials while data were recorded for off-line analysis. The analyses suggest that this communication channel can be operated accurately at the rate of 0.20 bits/sec. In other words, under the conditions we used, subjects can communicate 12.0 bits, or 2.3 characters, per min.