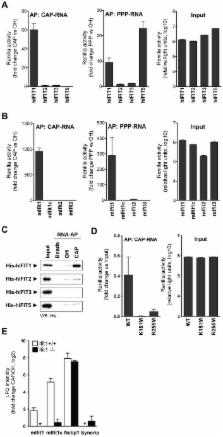 Viruses that generate capped RNA lacking 2′O methylation on the first ribose are severely affected by the antiviral activity of Type I interferons. We used proteome-wide affinity purification coupled to mass spectrometry to identify human and mouse proteins specifically binding to capped RNA with different methylation states. This analysis, complemented with functional validation experiments, revealed that IFIT1 is the sole interferon-induced protein displaying higher affinity for unmethylated than for methylated capped RNA. IFIT1 tethers a species-specific protein complex consisting of other IFITs to RNA. Pulsed stable isotope labelling with amino acids in cell culture coupled to mass spectrometry as well as in vitro competition assays indicate that IFIT1 sequesters 2′O-unmethylated capped RNA and thereby impairs binding of eukaryotic translation initiation factors to 2′O-unmethylated RNA template, which results in inhibition of translation. The specificity of IFIT1 for 2′O-unmethylated RNA serves as potent antiviral mechanism against viruses lacking 2′O-methyltransferase activity and at the same time allows unperturbed progression of the antiviral program in infected cells.

Cellular messenger RNAs of higher eukaryotes are capped with a methylated guanine and, in addition, methylated at the 2′O position of the first ribose. Viruses unable to methylate their RNA at the 2′O position of the cap and viruses generating uncapped RNA with 5′ triphosphate groups are inhibited by an antiviral complex of different IFIT proteins. How IFIT proteins restrict viruses lacking 2′O methylation at the RNA cap remained unclear. We used a mass spectrometry-based approach to identify proteins binding to capped RNA with different methylation states. We found that IFIT1 directly binds to capped RNA and that this binding was dependent on the methylation state of the cap. Having identified IFIT1 as being central for recognition of 2′O-unmethylated viral RNA we further examined the mode of action of IFITs in vitro and in vivo. Our experiments clearly show that the antiviral mechanism of IFIT1 is based on sequestration of viral RNA lacking cap 2′O methylation, thereby selectively preventing translation of viral RNA. Our data establish IFIT1 as a general sensor for RNA 5′ end structures and provide an important missing link in our understanding of the antiviral activity of IFIT proteins.

Albert Tan,  Tanja I Näslund,  Andreas Pichlmair … (2007)
Double-stranded RNA (dsRNA) produced during viral replication is believed to be the critical trigger for activation of antiviral immunity mediated by the RNA helicase enzymes retinoic acid-inducible gene I (RIG-I) and melanoma differentiation-associated gene 5 (MDA5). We showed that influenza A virus infection does not generate dsRNA and that RIG-I is activated by viral genomic single-stranded RNA (ssRNA) bearing 5'-phosphates. This is blocked by the influenza protein nonstructured protein 1 (NS1), which is found in a complex with RIG-I in infected cells. These results identify RIG-I as a ssRNA sensor and potential target of viral immune evasion and suggest that its ability to sense 5'-phosphorylated RNA evolved in the innate immune system as a means of discriminating between self and nonself.

Fátima Gebauer,  Matthias W Hentze (2004)
Key Points Translational regulation can be global or mRNA specific, and most examples of translational regulation that have been described so far affect the rate-limiting initiation step. Global control of translation is frequently exerted by regulating the phosphorylation or availability of initiation factors. Two of the most well-known examples are the regulation of eukaryotic initiation factor (eIF)4E availability by 4E-binding proteins (4E-BPs), and the modulation of the levels of active ternary complex by eIF2α phosphorylation. mRNA-specific translational control is driven by RNA sequences and/or structures that are commonly located in the untranslated regions of the transcript. These features are usually recognized by regulatory proteins or micro RNAs (miRNAs). Quasi-circularization of mRNAs can be mediated by the cap structure and the poly(A) tail via the eIF4E–eIF4G–polyA-binding-protein (PABP) interaction. Such interactions between the 5′ and the 3′ ends of mRNAs could provide a spatial framework for the action of regulatory factors that bind to the 3′ untranslated region (UTR). However, other forms of 5′–3′-end interactions are likely to occur as well. Many regulatory proteins target the stable association of the small ribosomal subunit with the mRNA. These factors function by steric hindrance (for example, iron-regulatory protein; IRP), by interfering with the eIF4F complex (for example, Maskin, Bicoid, Cup) or by as-yet-unknown, distinct mechanisms to control translation initiation (sex-lethal; SXL). Other regulatory molecules modulate the joining of the large ribosomal subunit (hnRNP K and E1) or, potentially, post-initiation translation steps (miRNAs). General translation factors can regulate the expression of specific mRNAs. An illustrative example is the stimulation of translation of the mRNA that encodes the GCN4 transcriptional activator by eIF2α phosphorylation.

VSV strains with defects in their ability to shutdown innate immunity are potent systemic anti-cancer agents.

R Marius,  D Stojdl,  John Hiscott … (2003)
Ideally, an oncolytic virus will replicate preferentially in malignant cells, have the ability to treat disseminated metastases, and ultimately be cleared by the patient. Here we present evidence that the attenuated vesicular stomatitis strains, AV1 and AV2, embody all of these traits. We uncover the mechanism by which these mutants are selectively attenuated in interferon-responsive cells while remaining highly lytic in 80% of human tumor cell lines tested. AV1 and AV2 were tested in a xenograft model of human ovarian cancer and in an immune competent mouse model of metastatic colon cancer. While highly attenuated for growth in normal mice, both AV1 and AV2 effected complete and durable cures in the majority of treated animals when delivered systemically.

This work was supported by the Max Planck Society Free-Floater program to AP, the European Research Council (iViP)to AP, the Humboldt Research Fellowship to MH, and the German Research Society (DFG; SFB1022) to JZ. The funders had no role in study design, data collection and analysis, decision to publish, or preparation of the manuscript.