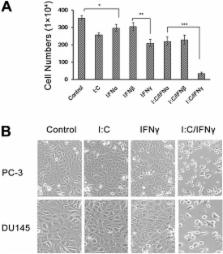 Prostate cancer is the second most commonly diagnosed cancer among men in the United States. Prostate cancer therapy is severely hampered by lack of response and development of resistance to conventional chemotherapeutic drugs in patients. Therefore, the development and discovery of new drugs have become an urgent clinical need. Interferons (IFNs), a family of pleiotropic cytokines, exert antitumor activities due to their anti-proliferative, immunomodulatory and proapoptotic functions. Here, we report that pretreatment of prostate cancer PC-3 cells with IFNs sensitized these cells to double-stranded RNAs (dsRNAs)-induced apoptosis. The enhancement effect of IFN treatment was dependent on IFN subtypes, in particular, IFN γ. In comparison with IFN α or β, IFN γ treatment remarkably augmented apoptosis in PC-3 cells induced with polyinosinic:polycytidylic acid (poly I:C), a synthesized form of dsRNA. We demonstrated that IFN-signaling was necessary for these effects by using mutant cell lines. Transfection of 2–5A, the activator of RNase L, or silencing of dsRNA-dependent protein kinase R (PKR) by siRNA did not have any significant impact on this event, suggesting that neither RNase L nor PKR was involved in poly I:C/IFN γ-induced apoptosis in the cells. Further investigation of the apoptotic pathway revealed that Bak, a pro-apoptotic member of the Bcl-2family, was synergistically up-regulated by IFN γ and poly I:C, whereas other members of the family were not affected. Knocking down of Bak demonstrated its contribution to poly I:C/IFN γ-induced apoptosis in the cells. We believeour findings will precipitate the design of novel therapeutic strategies for prostate cancer.

Jonathan Samuel (2001)
Tremendous progress has been made in understanding the molecular basis of the antiviral actions of interferons (IFNs), as well as strategies evolved by viruses to antagonize the actions of IFNs. Furthermore, advances made while elucidating the IFN system have contributed significantly to our understanding in multiple areas of virology and molecular cell biology, ranging from pathways of signal transduction to the biochemical mechanisms of transcriptional and translational control to the molecular basis of viral pathogenesis. IFNs are approved therapeutics and have moved from the basic research laboratory to the clinic. Among the IFN-induced proteins important in the antiviral actions of IFNs are the RNA-dependent protein kinase (PKR), the 2',5'-oligoadenylate synthetase (OAS) and RNase L, and the Mx protein GTPases. Double-stranded RNA plays a central role in modulating protein phosphorylation and RNA degradation catalyzed by the IFN-inducible PKR kinase and the 2'-5'-oligoadenylate-dependent RNase L, respectively, and also in RNA editing by the IFN-inducible RNA-specific adenosine deaminase (ADAR1). IFN also induces a form of inducible nitric oxide synthase (iNOS2) and the major histocompatibility complex class I and II proteins, all of which play important roles in immune response to infections. Several additional genes whose expression profiles are altered in response to IFN treatment and virus infection have been identified by microarray analyses. The availability of cDNA and genomic clones for many of the components of the IFN system, including IFN-alpha, IFN-beta, and IFN-gamma, their receptors, Jak and Stat and IRF signal transduction components, and proteins such as PKR, 2',5'-OAS, Mx, and ADAR, whose expression is regulated by IFNs, has permitted the generation of mutant proteins, cells that overexpress different forms of the proteins, and animals in which their expression has been disrupted by targeted gene disruption. The use of these IFN system reagents, both in cell culture and in whole animals, continues to provide important contributions to our understanding of the virus-host interaction and cellular antiviral response.

Interferons at age 50: past, current and future impact on biomedicine

Ernest C. Borden,  Ganes C. Sen,  Gilles Uzé … (2007)
Key Points On the 50th anniversary of the discovery of interferon (IFN), we offer a perspective from more than 100,000 published papers, highlighting initial pivotal discoveries and more recent findings of conceptual importance. This covers the mechanisms of IFN induction, the cellular actions of IFN and IFN-stimulated genes (ISGs), and human therapeutic applications. The synthesis of IFNs requires stimulation by viruses or microbial products binding to Toll-like receptors, or chemical inducers. The development of small-molecule modulators is still in its infancy, but the delineation of the responsible signalling pathways has identified many target proteins. IFNs constitute a large protein family that can be subdivided into three types, binding to different receptors. These receptors initiate signalling by activating a complex signalling cascade regulated at many levels, resulting in a diverse pattern of ISG induction. ISGs are a diverse group of more than 300 genes, which can have direct antiviral and antitumour functions. These are attractive targets for high-throughput screening for the identification of new modulators of the IFN system. IFNs were initially investigated for their potential as antivirals, and are now commonly used in anti-HBV (hepatitis B virus) and anti-HCV (hepatitis C virus) therapy. They might also have prophylactic or therapeutic effectiveness in SARS (severe acute respiratory syndrome), influenza or another virus pandemic. The first FDA approval of an IFN was, however, not for virus infection but for cancer. The mechanisms of antitumour action are incompletely understood. Aberrations of the IFN system are also emerging as important contributors to cancer development. IFNs also proved effectiveness in relapsing, remitting multiple sclerosis. It is now common practice to initiate IFN-β treatment at the time of diagnosis. Because of the effectiveness of IFNs in limiting virus replication, reducing tumour cell mass, controlling disease symptoms and prolonging survival, market sales of IFNs approach US$4 billion. As all the effects of IFNs are mediated through ISGs, understanding of the function of these genes might lead to more efficacious antiviral and anti-cancer drugs.

S. Halabi,  E Rosenberg,  E Small … (2008)
Bevacizumab is an antibody that binds to vascular endothelial growth factor (VEGF) and has activity in metastatic renal cell carcinoma (RCC). Interferon alfa (IFN) is a historic standard first-line treatment for RCC. A prospective, randomized phase III trial of bevacizumab plus IFN versus IFN monotherapy was conducted. Patients with previously untreated, metastatic clear-cell RCC were randomly assigned to receive either bevacizumab (10 mg/kg intravenously every 2 weeks) plus IFN (9 million U subcutaneously three times weekly) or the same dose and schedule of IFN monotherapy in a multicenter phase III trial. The primary end point was overall survival (OS). Secondary end points were progression-free survival (PFS), objective response rate (ORR), and safety. Between October 2003 and July 2005, 732 patients were enrolled. The prespecified stopping rule for OS has not yet been reached. The median PFS was 8.5 months in patients receiving bevacizumab plus IFN (95% CI, 7.5 to 9.7 months) versus 5.2 months (95% CI, 3.1 to 5.6 months) in patients receiving IFN monotherapy (log-rank P < .0001). The adjusted hazard ratio was 0.71 (95% CI, 0.61 to 0.83; P < .0001). Bevacizumab plus IFN had a higher ORR as compared with IFN (25.5% [95% CI, 20.9% to 30.6%] v 13.1% [95% CI, 9.5% to 17.3%]; P < .0001). Overall toxicity was greater for bevacizumab plus IFN, including significantly more grade 3 hypertension (9% v 0%), anorexia (17% v 8%), fatigue (35% v 28%), and proteinuria (13% v 0%). Bevacizumab plus IFN produces a superior PFS and ORR in untreated patients with metastatic RCC as compared with IFN monotherapy. Toxicity is greater in the combination therapy arm.