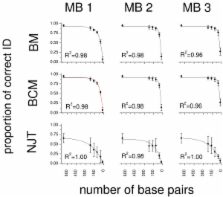 Analysis of variance revealed highly significant differences among ID criteria and insect orders. A posteriori comparisons of means showed that NJT had always a significantly lower identification success (NJT = 0.656, S.D. = 0.118) compared to both BM and BCM (BM = 0.948, S.D. = 0.026; BCM = 0.946, S.D. = 0.031). NJT showed significant variations among orders, with the highest proportion of correctly identified queries in Hymenoptera and Orthoptera and the lowest in Diptera. Conversely, the proportions of correct matches of BM and BCM were consistent across orders but a progressive increase in false identification was observed when larger reference databases were used.

Regardless the relatively low proportion of Type I errors (misidentification of queries which are represented in the reference database) of BM and BCM, the lack of reference DNA barcodes for 98% of the known insect species implies that insect DNA barcoding is heavily biased by Type II errors (misidentification of queries without conspecifics in the database). The detrimental effects of Type II errors could be circumvented if insect DNA barcoding is used to verify the lack of correspondence between a query and a list of properly referenced target species ( e.g. insect pests). This "negative identification" would only be subjected to Type I errors and could be profitably adopted in insect quarantine procedures.

DNA barcoding and taxonomy in Diptera: a tale of high intraspecific variability and low identification success.

Rudolf Meier, Kwong Shiyang, Gaurav Vaidya … (2006)
DNA barcoding and DNA taxonomy have recently been proposed as solutions to the crisis of taxonomy and received significant attention from scientific journals, grant agencies, natural history museums, and mainstream media. Here, we test two key claims of molecular taxonomy using 1333 mitochondrial COI sequences for 449 species of Diptera. We investigate whether sequences can be used for species identification ("DNA barcoding") and find a relatively low success rate (< 70%) based on tree-based and newly proposed species identification criteria. Misidentifications are due to wide overlap between intra- and interspecific genetic variability, which causes 6.5% of all query sequences to have allospecific or a mixture of allo- and conspecific (3.6%) best-matching barcodes. Even when two COI sequences are identical, there is a 6% chance that they belong to different species. We also find that 21% of all species lack unique barcodes when consensus sequences of all conspecific sequences are used. Lastly, we test whether DNA sequences yield an unambiguous species-level taxonomy when sequence profiles are assembled based on pairwise distance thresholds. We find many sequence triplets for which two of the three pairwise distances remain below the threshold, whereas the third exceeds it; i.e., it is impossible to consistently delimit species based on pairwise distances. Furthermore, for species profiles based on a 3% threshold, only 47% of all profiles are consistent with currently accepted species limits, 20% contain more than one species, and 33% only some sequences from one species; i.e., adopting such a DNA taxonomy would require the redescription of a large proportion of the known species, thus worsening the taxonomic impediment. We conclude with an outlook on the prospects of obtaining complete barcode databases and the future use of DNA sequences in a modern integrative taxonomy.

Mehrdad Hajibabaei, Daniel Janzen, John M Burns … (2006)
Although central to much biological research, the identification of species is often difficult. The use of DNA barcodes, short DNA sequences from a standardized region of the genome, has recently been proposed as a tool to facilitate species identification and discovery. However, the effectiveness of DNA barcoding for identifying specimens in species-rich tropical biotas is unknown. Here we show that cytochrome c oxidase I DNA barcodes effectively discriminate among species in three Lepidoptera families from Area de Conservación Guanacaste in northwestern Costa Rica. We found that 97.9% of the 521 species recognized by prior taxonomic work possess distinctive cytochrome c oxidase I barcodes and that the few instances of interspecific sequence overlap involve very similar species. We also found two or more barcode clusters within each of 13 supposedly single species. Covariation between these clusters and morphological and/or ecological traits indicates overlooked species complexes. If these results are general, DNA barcoding will significantly aid species identification and discovery in tropical settings.