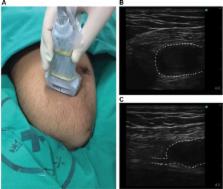 Post-amputation pain (PAP) is highly prevalent after limb amputation, and stump neuromas play a key role in the generation of the pain. Presently, PAP refractory to medical management is frequently treated with minimally invasive procedures guided by ultrasound, such as alcohol neurolysis and radiofrequency ablation (RFA).

All patients were treated with neurolysis using alcohol solutions guided by ultrasound. Seven (54%) of 13 subjects achieved pain relief after 1–3 alcohol injection treatments. The remaining 6 subjects obtained pain relief after receiving 2 administrations of ultrasound-guided RFA. After a 6-month follow-up evaluation period, pain quantities were also assessed. Both stump pain (including intermittent sharp pain and continuous burning pain) and phantom pain were relieved. The frequency of intermittent sharp pain was decreased, and no complications were noted during the observation.

The use of ultrasound guidance for alcohol injection and RFA of painful stump neuromas is a simple, radiation-free, safe, and effective procedure that provides sustained pain relief in PAP patients. In this case series, RFA was found to be an effective alternative to alcohol injection.

Herta Flor,  Lone Nikolajsen,  Troels Staehelin Jensen (2006)
Phantom pain refers to pain in a body part that has been amputated or deafferented. It has often been viewed as a type of mental disorder or has been assumed to stem from pathological alterations in the region of the amputation stump. In the past decade, evidence has accumulated that phantom pain might be a phenomenon of the CNS that is related to plastic changes at several levels of the neuraxis and especially the cortex. Here, we discuss the evidence for putative pathophysiological mechanisms with an emphasis on central, and in particular cortical, changes. We cite both animal and human studies and derive suggestions for innovative interventions aimed at alleviating phantom pain.

Prevalence and characteristics of chronic phantom limb pain among American veterans. Results of a trial survey.

R A Sherman,  C J Sherman (1983)
Twelve hundred American amputees who are military veterans were surveyed by questionnaire about their amputations, pain sensitivity, demography, treatment history, stump problems, phantom sensations, and phantom pain. Over sixty percent responded and of these 85 percent reported significant amounts of phantom pain. This is in sharp contrast to both the literature and our clinical experience which indicate that although most amputees seen in a clinical setting report some occasional minor discomfort due to their phantoms, only between one half percent and five percent experience severe phantom pain. There was no relationship between reasons for amputation, use of prosthesis, pain sensitivity, age, years since amputation, or other demographic variables and presence of severity of phantom pain. Those respondents describing phantom pain usually had either momentary episodes of intense, debilitating pain, or virtually continuous discomfort varying in intensity but reaching debilitating levels occasionally. The fairly continuous pains were all similar in description to magnified versions of comfortable phantom sensations reported by other respondents. Few of the reported treatments were of any value.