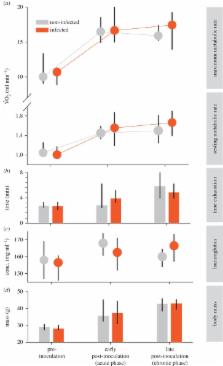 Journal: Proceedings of the Royal Society B: Biological Sciences

Blood parasites (Haemosporidia) are thought to impair the flight performance of infected animals, and therefore, infected birds are expected to differ from their non-infected counterparts in migratory capacity. Since haemosporidians invade host erythrocytes, it is commonly assumed that infected individuals will have compromised aerobic capacity, but this has not been examined in free-living birds. We tested if haemosporidian infections affect aerobic performance by examining metabolic rates and exercise endurance in migratory great reed warblers ( Acrocephalus arundinaceus) experimentally treated with Plasmodium relictum pGRW04 and in naturally infected wild birds over consecutive life-history stages. We found no effect of acute or chronic infections on resting metabolic rate, maximum metabolic rate or exercise endurance in either experimentally treated or free-living birds. Oxygen consumption rates during rest and while undergoing maximum exercise as well as exercise endurance increased from breeding to migration stages in both infected and non-infected birds. Importantly, phenotypic changes associated with preparation for migration were similarly unaffected by parasitaemia. Consequently, migratory birds experiencing parasitaemia levels typical of chronic infection do not differ in migratory capacity from their uninfected counterparts. Thus, if infected hosts differ from uninfected conspecifics in migration phenology, other mechanisms besides aerobic capacity should be considered.

Erik Alerstam,  Hans Hedenström (1997)
By combining the potential flight range of fuel with different migration policies, the optimum departure fuel load for migratory birds can be calculated. We evaluate the optimum departure fuel loads associated with minimization of three different currencies: (1) overall time of migration, (2) energy cost of transport and (3) total energy coast of migration. Predicted departure loads are highest for (1), lowest for (2) and intermediate for (3). Further, currencies (1) and (3) show departure loads dependent on the fuel accumulation rate at stopovers, while (2) is not affected by variation in the rate of fuel accumulation. Furthermore, fuel loads optimized with respect to currency (3) will differ depending on the size (body mass) of the bird and the energy density of the fuel. We review ecological situations in which the various currencies may apply, and suggest how a combination of stopover decisions and observations of flight speed may be used to decide among the three cases of migration policies. Finally, we calculate that the total energy cost of migration is roughly divided between flight and stopover as 1:2. The total time of migration is similarly divided between flight and stopover as 1:7, probably with a relatively longer stopover time in larger species. Hence, we may expect strong selection pressures to optimize the fuel accumulation strategies during stopover episodes.Copyright 1997 Academic Press Limited Copyright 1997 Academic Press Limited

H Westerdahl,  M Stjernman,  Bengt Hansson … (2000)
A fragment of the mitochondrial cytochrome b gene of avian malaria (genera Haemoproteus and Plasmodium) was amplified from blood samples of 12 species of passerine birds from the genera Acrocephalus, Phylloscopus and Parus. By sequencing 478 nucleotides of the obtained fragments, we found 17 different mitochondrial haplotypes of Haemoproteus or Plasmodium among the 12 bird species investigated. Only one out of the 17 haplotypes was found in more than one host species, this exception being a haplotype detected in both blue tits (Parus caeruleus) and great tits (Parus major). The phylogenetic tree which was constructed grouped the sequences into two clades, most probably representing Haemoproteus and Plasmodium, respectively. We found two to four different parasite mitochondrial DNA (mtDNA) haplotypes in four bird species. The phylogenetic tree obtained from the mtDNA of the parasites matched the phylogenetic tree of the bird hosts poorly. For example, the two tit species and the willow warbler (Phylloscopus trochilus) carried parasites differing by only 0.6% sequence divergence, suggesting that Haemoproteus shift both between species within the same genus and also between species in different families. Hence, host shifts seem to have occurred repeatedly in this parasite host system. We discuss this in terms of the possible evolutionary consequences for these bird species.

Avian malaria parasites and other haemosporidia