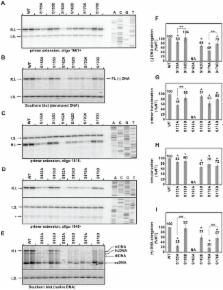 David P. Aden,  Alice Fogel,  Stanley Plotkin … (1979)
A significant aspect of primary hepatic carcinoma in man is the high positive correlation of hepatocellular carcinoma with infection with hepatitis B virus (HBV)1. Analysis of the relationship between HBV infection and oncogenesis is difficult because natural infection with HBV is limited to man and experimental infection has been achieved only in chimpanzees and gibbons. Furthermore, because HBV has not been successfully propagated in cell culture, basic study of virus-cell interaction of the aetiological agent of one of the most widespread infections of man has been impossible. Recently, however, a cell line (PLC/PRF/5) derived from a human hepatoma biopsy was described which produces the HRV surface antigen (HBsAg) and so provides a tool for the experimental investigation of HBV in viro. We now report the derivation and characterisation of two additional cell lines primary liver carcinomas. In contrast to the PLC/PRF/5 cell line, these cell lines retain the capacity to synthesise many human plasma proteins, including both albumin and alpha-fetoprotein (AFP). One of these lines also produces BHsAg. We also present evidence that HBsAg synthesis and secretion in this cell line are correlated with the growth state of the culture. This finding is in contrast to the continuous HBsAg production found in the PLC/PRF/5 cell line.

The arginine-rich domain of the hepatitis B virus core protein is required for pregenome encapsidation and productive viral positive-strand DNA synthesis but not for virus assembly.

Michael Nassal (1992)
Assembly of replication-competent hepatitis B virus (HBV) nucleocapsids requires the interaction of the core protein, the P protein, and the RNA pregenome. The core protein contains an arginine-rich C-terminal domain which is dispensable for particle formation in heterologous expression systems. Using transient expression in HuH7 cells of a series of C-terminally truncated core proteins, I examined the functional role of this basic region in the context of a complete HBV genome. All variants containing at least the 144 N-terminal amino acids were assembly competent, but efficient pregenome encapsidation was observed only with variants consisting of 164 or more amino acids. These data indicate that one function of the arginine-rich region is to provide the interactions between core protein and RNA pregenome. However, in cores from the variant ending with amino acid 164, the production of complete positive-strand DNA was drastically reduced. Moreover, almost all positive-strand DNA originated from in situ priming, whereas in wild-type particles, this type of priming not supporting the formation of relaxed circular DNA (RC-DNA) accounted for about one half of the positive strands. Further C-terminal residues to position 173 restored RC-DNA formation, and the corresponding variant did not differ from the full-length core protein in all assays used. The observation that RNA encapsidation and formation of RC-DNA can be genetically separated suggests that the core protein, via its basic C-terminal region, also acts as an essential auxiliary component in HBV replication, possibly like a histone, or like a single-stranded-DNA-binding protein. In contrast to their importance for HBV replication, sequences beyond amino acid 164 were not required for the formation of enveloped virions. Since particles from variant 164 did not contain mature DNA genomes, a genome maturation signal is apparently not required for HBV nucleocapsid envelopment.