Mitochondria in the signaling pathways that control longevity and health span 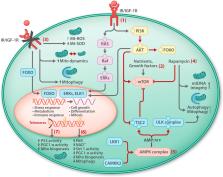 Genetic and pharmacological intervention studies have identified evolutionarily conserved and functionally interconnected networks of cellular energy homeostasis, nutrient-sensing, and genome damage response signaling pathways, as prominent regulators of longevity and health span in various species. Mitochondria are the primary sites of ATP production and are key players in several other important cellular processes. Mitochondrial dysfunction diminishes tissue and organ functional performance and is a commonly considered feature of the aging process. Here we review the evidence that through reciprocal and multilevel functional interactions, mitochondria are implicated in the lifespan modulation function of these pathways, which altogether constitute a highly dynamic and complex system that controls the aging process. An important characteristic of these pathways is their extensive crosstalk and apparent malleability to modification by non-invasive pharmacological, dietary, and lifestyle interventions, with promising effects on lifespan and health span in animal models and potentially also in humans.

Thomas von Zglinicki (2002)
Telomeres in most human cells shorten with each round of DNA replication, because they lack the enzyme telomerase. This is not, however, the only determinant of the rate of loss of telomeric DNA. Oxidative damage is repaired less well in telomeric DNA than elsewhere in the chromosome, and oxidative stress accelerates telomere loss, whereas antioxidants decelerate it. I suggest here that oxidative stress is an important modulator of telomere loss and that telomere-driven replicative senescence is primarily a stress response. This might have evolved to block the growth of cells that have been exposed to a high risk of mutation.

S Jäger,  Christoph Handschin,  Julie St-Pierre … (2007)
Activation of AMP-activated kinase (AMPK) in skeletal muscle increases glucose uptake, fatty acid oxidation, and mitochondrial biogenesis by increasing gene expression in these pathways. However, the transcriptional components that are directly targeted by AMPK are still elusive. The peroxisome-proliferator-activated receptor gamma coactivator 1alpha (PGC-1alpha) has emerged as a master regulator of mitochondrial biogenesis; furthermore, it has been shown that PGC-1alpha gene expression is induced by exercise and by chemical activation of AMPK in skeletal muscle. Using primary muscle cells and mice deficient in PGC-1alpha, we found that the effects of AMPK on gene expression of glucose transporter 4, mitochondrial genes, and PGC-1alpha itself are almost entirely dependent on the function of PGC-1alpha protein. Furthermore, AMPK phosphorylates PGC-1alpha directly both in vitro and in cells. These direct phosphorylations of the PGC-1alpha protein at threonine-177 and serine-538 are required for the PGC-1alpha-dependent induction of the PGC-1alpha promoter. These data indicate that AMPK phosphorylation of PGC-1alpha initiates many of the important gene regulatory functions of AMPK in skeletal muscle.

daf-2, an insulin receptor-like gene that regulates longevity and diapause in Caenorhabditis elegans.

This is an open access article under the CC BY license ( http://creativecommons.org/licenses/BY/4.0/).