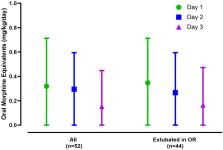 In neonates and infants, epidural analgesia has gained popularity as a means of providing postoperative analgesia, limiting opioid-related adverse effects and improving the postoperative course. In addition to a local anesthetic agent, adjunctive agents may be added to further augment analgesia. Clonidine is an α 2-adrenergic agonist that is frequently added to single-shot caudal analgesia, but there are limited data regarding its use in a continuous epidural infusion, especially in patients ≤12 months of age.

We retrospectively reviewed the hospital records of neonates and infants who received postoperative epidural infusions with 2-chloroprocaine, and clonidine was identified over a 4-year period.

The study cohort included 52 neonates and infants ranging in age from 0 to 12 months and in weight from 2.1 to 10.1 kilograms. The catheters were dosed with either 1.5% 2-chloroprocaine (n=47) or 3% 2-chloroprocaine (n=5) with clonidine (median concentration 0.2 µg/mL) infused at a median rate of 0.72 mL/kg/hour. Pain scores were uniformly ≤3 at all evaluation points during the first 72 postoperative hours with a limited need for supplemental systemic opioids. No serious adverse effects were noted.

With the recognized limitations of a retrospective study, these preliminary data demonstrate the safety of adding clonidine to an epidural infusion of 2-chloroprocaine in neonates and infants less than 12 months of age. Future studies are needed to determine its analgesic efficacy compared to 2-chloroprocaine alone and the optimal clonidine concentration for postoperative epidural infusions.

The FLACC: a behavioral scale for scoring postoperative pain in young children.

S I Merkel,  T Voepel-Lewis,  J Shayevitz … (2015)
To evaluate the reliability and validity of the FLACC Pain Assessment Tool which incorporates five categories of pain behaviors: facial expression; leg movement; activity; cry; and consolability. Eighty-nine children aged 2 months to 7 years, (3.0 +/- 2.0 yrs.) who had undergone a variety of surgical procedures, were observed in the Post Anesthesia Care Unit (PACU). The study consisted of: 1) measuring interrater reliability; 2) testing validity by measuring changes in FLACC scores in response to administration of analgesics; and 3) comparing FLACC scores to other pain ratings. The FLACC tool was found to have high interrater reliability. Preliminary evidence of validity was provided by the significant decrease in FLACC scores related to administration of analgesics. Validity was also supported by the correlation with scores assigned by the Objective Pain Scale (OPS) and nurses' global ratings of pain. The FLACC provides a simple framework for quantifying pain behaviors in children who may not be able to verbalize the presence or severity of pain. Our preliminary data indicates the FLACC pain assessment tool is valid and reliable.

alpha(2)-adrenergic agonists for regional anesthesia. A clinical review of clonidine (1984-1995).

Distribution of alpha 2 agonist binding sites in the rat and human central nervous system: analysis of some functional, anatomic correlates of the pharmacologic effects of clonidine and related adrenergic agents.

J R Unnerstall,  T Kopajtic,  M Kuhar (1984)
Using [3H]para-aminoclonidine, alpha 2 adrenergic binding sites have been mapped in the rat and human CNS using in vitro labeling autoradiographic techniques. In both the rat and human thoracic spinal cord, high densities of alpha 2 binding sites were associated with the substantia gelatinosa and the intermediolateral cell column. In the rat medulla, high binding site density was observed in the medial nucleus of the solitary tract, dorsal motor nucleus of the vagus, raphe pallidus and the substantia gelatinosa of the trigeminal nucleus, while lower levels of specific binding were found in the lateral and ventrolateral medulla. In the human, a similar distribution was observed. However, significantly lower levels of specific binding were seen in the medial nts as opposed to the dmv. In the rat, high levels of specific binding were seen at pontine and midbrain levels in the locus coeruleus, parabrachial nucleus and periaqueductal gray. In the forebrain, several hypothalmic and limbic regions, including the paraventricular and arcuate nuclei of the hypothalamus, the central, medial and basal nuclei of the amygdala, lateral septum and bed nucleus of the stria terminalis and pyriform, entorhinal and insular cortex were labeled. Each of these regions are involved in either modulating autonomic functions directly or integrating somatosensory and/or affective function with autonomic mechanisms. Further, these regions are interrelated by reciprocal connections, and neurons that utilize noradrenaline or adrenaline as their neurotransmitter form a vital part of these connections. Thus, these functional, anatomical and neurochemical correlates of the alpha 2 binding site distribution establish a neurological basis for the complex pharmacological effects of centrally acting alpha 2 agonists.