Subjective assessment for super recognition: an evaluation of self-report methods in civilian and police participants 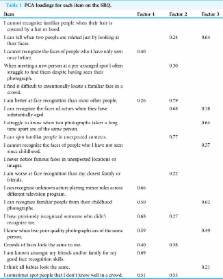 Metacognition about face recognition has been much discussed in the psychological literature. In particular, the use of self-report to identify people with prosopagnosia (“face blindness”) has contentiously been debated. However, no study to date has specifically assessed metacognition at the top end of the spectrum. If people with exceptionally proficient face recognition skills (“super-recognizers,” SRs) have greater insight into their abilities, self-report instruments may offer an efficient means of reducing candidate lists in SR screening programs. Here, we developed a “super-recognizer questionnaire” (SRQ), calibrated using a top-end civilian sample (Experiment 1). We examined its effectiveness in identifying SRs in pools of police (Experiment 2) and civilian (Experiment 3) participants, using objective face memory and matching tests. Moderate effect sizes in both samples suggest limited insight into face memory and target-present face matching ability, whereas the only predictor of target-absent matching performance across all samples was the number of years that an officer had been in the police force. Because the SRQ and single-item ratings showed little sensitivity in discriminating SRs from typical perceivers in police officers and civilians, we recommend against the use of self-report instruments in SR screening programs.

Unfamiliar faces are not faces: evidence from a matching task.

David J. Robertson,  Eilidh Noyes,  Andrew J. Dowsett … (2016)
Face recognition is used to prove identity across a wide variety of settings. Despite this, research consistently shows that people are typically rather poor at matching faces to photos. Some professional groups, such as police and passport officers, have been shown to perform just as poorly as the general public on standard tests of face recognition. However, face recognition skills are subject to wide individual variation, with some people showing exceptional ability—a group that has come to be known as ‘super-recognisers’. The Metropolitan Police Force (London) recruits ‘super-recognisers’ from within its ranks, for deployment on various identification tasks. Here we test four working super-recognisers from within this police force, and ask whether they are really able to perform at levels above control groups. We consistently find that the police ‘super-recognisers’ perform at well above normal levels on tests of unfamiliar and familiar face matching, with degraded as well as high quality images. Recruiting employees with high levels of skill in these areas, and allocating them to relevant tasks, is an efficient way to overcome some of the known difficulties associated with unfamiliar face recognition.