How to assess intra- and inter-observer agreement with quantitative PET using variance component analysis: a proposal for standardisation 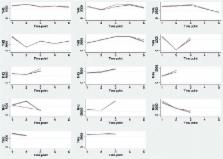 Quantitative measurement procedures need to be accurate and precise to justify their clinical use. Precision reflects deviation of groups of measurement from another, often expressed as proportions of agreement, standard errors of measurement, coefficients of variation, or the Bland-Altman plot. We suggest variance component analysis (VCA) to estimate the influence of errors due to single elements of a PET scan (scanner, time point, observer, etc.) to express the composite uncertainty of repeated measurements and obtain relevant repeatability coefficients (RCs) which have a unique relation to Bland-Altman plots. Here, we present this approach for assessment of intra- and inter-observer variation with PET/CT exemplified with data from two clinical studies.

In study 1, 30 patients were scanned pre-operatively for the assessment of ovarian cancer, and their scans were assessed twice by the same observer to study intra-observer agreement. In study 2, 14 patients with glioma were scanned up to five times. Resulting 49 scans were assessed by three observers to examine inter-observer agreement. Outcome variables were SUVmax in study 1 and cerebral total hemispheric glycolysis (THG) in study 2.

VCA is an appealing approach for weighing different sources of variation against each other, summarised as RCs. The involved linear mixed effects models require carefully considered sample sizes to account for the challenge of sufficiently accurately estimating variance components.

Patrick E Shrout,  D J Fleiss,  P Shrout (1979)
Reliability coefficients often take the form of intraclass correlation coefficients. In this article, guidelines are given for choosing among six different forms of the intraclass correlation for reliability studies in which n target are rated by k judges. Relevant to the choice of the coefficient are the appropriate statistical model for the reliability and the application to be made of the reliability results. Confidence intervals for each of the forms are reviewed.

A simulation study of the number of events per variable in logistic regression analysis.

Theodore R. Holford,  J Concato,  Kathryn E Kemper … (1996)
We performed a Monte Carlo study to evaluate the effect of the number of events per variable (EPV) analyzed in logistic regression analysis. The simulations were based on data from a cardiac trial of 673 patients in which 252 deaths occurred and seven variables were cogent predictors of mortality; the number of events per predictive variable was (252/7 =) 36 for the full sample. For the simulations, at values of EPV = 2, 5, 10, 15, 20, and 25, we randomly generated 500 samples of the 673 patients, chosen with replacement, according to a logistic model derived from the full sample. Simulation results for the regression coefficients for each variable in each group of 500 samples were compared for bias, precision, and significance testing against the results of the model fitted to the original sample. For EPV values of 10 or greater, no major problems occurred. For EPV values less than 10, however, the regression coefficients were biased in both positive and negative directions; the large sample variance estimates from the logistic model both overestimated and underestimated the sample variance of the regression coefficients; the 90% confidence limits about the estimated values did not have proper coverage; the Wald statistic was conservative under the null hypothesis; and paradoxical associations (significance in the wrong direction) were increased. Although other factors (such as the total number of events, or sample size) may influence the validity of the logistic model, our findings indicate that low EPV can lead to major problems.