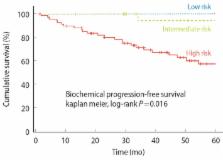 Presently there is no published data on the outcomes of localized or locally-advanced prostate cancer (PCa) treated by external-beam radiotherapy (RT) in Indonesia.

This study retrospectively analyzed 96 patients with localized or locally-advanced PCa treated by RT from year 1995 to 2009, at the national referral hospital and the national cancer hospital of Indonesia. Cumulative prostate and pelvic radiation dose/type was <70 Gy conventional RT in 84.4% patients, and ≥70 Gy Three dimensional-conformal or intensity modulated RT in 15.6% patients. Overall survival (OS) and biochemical progression-free survival (BFS) were estimated by Kaplan-Meier. Predictors of OS and biochemical recurrence were analyzed by multivariate Cox regressions.

RT is an effective treatment modality for localized or locally-advanced PCa in Indonesian patients, with outcomes and predictors consistent to that reported elsewhere. Predictors of poorer outcomes include high-risk group, higher pretreatment PSA, incidental detection by TUR-P, and lack of adjuvant HT. Adjuvant hormonal therapy significantly improve the survival of high risk patients.

Global patterns of cancer incidence and mortality rates and trends.

Ahmedin Jemal,  Melissa M Center,  Carol DeSantis … (2010)
While incidence and mortality rates for most cancers (including lung, colorectum, female breast, and prostate) are decreasing in the United States and many other western countries, they are increasing in several less developed and economically transitioning countries because of adoption of unhealthy western lifestyles such as smoking and physical inactivity and consumption of calorie-dense food. Indeed, the rates for lung and colon cancers in a few of these countries have already surpassed those in the United States and other western countries. Most developing countries also continue to be disproportionately affected by cancers related to infectious agents, such as cervix, liver, and stomach cancers. The proportion of new cancer cases diagnosed in less developed countries is projected to increase from about 56% of the world total in 2008 to more than 60% in 2030 because of the increasing trends in cancer rates and expected increases in life expectancy and growth of the population. In this review, we describe these changing global incidence and mortality patterns for select common cancers and the opportunities for cancer prevention in developing countries. (c)2010 AACR.

René-Olivier Mirimanoff,  Guy Storme,  Abraham Kuten … (2002)
We did a randomised phase III trial comparing external irradiation alone and external irradiation combined with an analogue of luteinising-hormone releasing hormone (LHRH) to investigate the added value of long-term androgen suppression in locally advanced prostate cancer. Between 1987 and 1995, 415 patients were randomly assigned radiotherapy alone or radiotherapy plus immediate androgen suppression. Eligible patients had T1-2 tumours of WHO grade 3 or T3-4 N0-1 M0 tumours; the median age of participants was 71 years (range 51-80). In both treatment groups, 50 Gy radiation was delivered to the pelvis over 5 weeks, and 20 Gy over 2 weeks as a prostatic boost. Goserelin (3.6 mg subcutaneously every 4 weeks) was started on the first day of irradiation and continued for 3 years; cyproterone acetate (150 mg orally) was given for 1 month starting 1 week before the first goserelin injection. The primary endpoint was clinical disease-free survival. Analyses were by intention to treat. 412 patients had evaluable data, with median follow-up of 66 months (range 1-126). 5-year clinical disease-free survival was 40% (95% CI 32-48) in the radiotherapy-alone group and 74% (67-81) in the combined-treatment group (p=0.0001). 5-year overall survival was 62% (52-72) and 78% (72-84), respectively (p=0.0002) and 5-year specific survival 79% (72-86) and 94% (90-98). Immediate androgen suppression with an LHRH analogue given during and for 3 years after external irradiation improves disease-free and overall survival of patients with locally advanced prostate cancer.