Rutaecarpine may improve neuronal injury, inhibits apoptosis, inflammation and oxidative stress by regulating the expression of ERK1/2 and Nrf2/HO-1 pathway in rats with cerebral ischemia-reperfusion injury 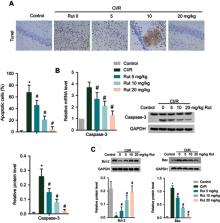 Cerebral ischemia-reperfusion (CI/R) injury is a more serious brain injury caused by the recovery of blood supply after cerebral ischemia for a certain period of time. Rutaecarpine (Rut) is an alkaloid isolated from Evodia officinalis with various biological activities. Previous studies have shown that Rut has a certain protective effect on ischemic brain injury, but the specific molecular mechanism is still unknown.

In this study, a rat model of CI/R was established to explore the effects and potential molecular mechanisms of Rut on CI/R injury in rats.

The results showed that Rut alleviated neuronal injury induced by CI/R in a dose-dependent manner. Besides, Rut inhibited neuronal apoptosis by inhibiting the activation of caspase 3 and the expression of Bax. In addition, Rut alleviated the inflammatory response and oxidative stress caused by CI/R through inhibiting the production of pro-inflammatory factors (IL-6 and IL-1β), lactate dehydrogenase (LDH), malondialdehyde (MDA) and ROS, and increased the levels of anti-inflammatory factors (IL-4 and IL-10) and superoxide dismutase (SOD). Biochemically, Western blot analyses showed that Rut inhibited the phosphorylation of ERK1/2 and promoted the expression of nuclear factor-erythroid 2 related factor 2 (Nrf2) pathway-related proteins (Nrf2, heme oxygenase 1 (HO-1) and NAD (P) H-quinone oxidoreductase 1) in a dose-dependent manner. These results show that Rut may alleviate brain injury induced by CI/R by regulating the expression of ERK1/2 and the activation of Nrf2/HO-1 pathway.

In conclusion, these results suggest that Rut may be used as an effective therapeutic agent for damage caused by CI/R.

Olle Lindvall,  Zaal Kokaia (2015)
A bulk of experimental evidence supports the idea that the stroke-damaged adult brain makes an attempt to repair itself by producing new neurons also in areas where neurogenesis does not normally occur (e.g., the striatum and cerebral cortex). Knowledge about mechanisms regulating the different steps of neurogenesis after stroke is rapidly increasing but still incomplete. The functional consequences of stroke-induced neurogenesis and the level of integration of the new neurons into existing neural circuitries are poorly understood. To have a substantial impact on the recovery after stroke, this potential mechanism for self-repair needs to be enhanced, primarily by increasing the survival and differentiation of the generated neuroblasts. Moreover, for efficient repair, optimization of neurogenesis most likely needs to be combined with promotion of other endogenous neuroregenerative responses (e.g., protection and sprouting of remaining mature neurons, transplantation of neural stem/progenitor cells [NSPC]-derived neurons and glia cells, and modulation of inflammation).

Heme oxygenase-1 as a target for drug discovery.

Roberto Motterlini,  Roberta Foresti (2014)
Heme oxygenase enzymes, which exist as constitutive (HO-2) and inducible (HO-1) isoforms, degrade heme to carbon monoxide (CO) and the bile pigment biliverdin. In the last two decades, substantial scientific evidence has been collected on the function of HO-1 in cell homeostasis, emphasizing these two important features: (i) HO-1 is a fundamental "sensor" of cellular stress and directly contributes toward limiting or preventing tissue damage; (ii) the products of HO-1 activity dynamically participate in cellular adaptation to stress and are inherently involved in the mechanisms of defence.

David Peterson,  Kazuaki Yoshikawa,  Chandresh Gajera … (2010)
The microenvironment of growth factors in the subependymal zone (SEZ) of the adult brain provides the instructive milieu for neurogenesis to proceed in this germinal niche. In particular, tight regulation of bone morphogenetic protein (BMP) signaling is essential to balance proliferative and non-proliferative cell fate specification. However, the regulatory pathways that control BMP signaling in the SEZ are still poorly defined. We demonstrate that LRP2, a clearance receptor for BMP4 is specifically expressed in ependymal cells of the lateral ventricles in the adult brain. Intriguingly, expression is restricted to the ependyma that faces the stem cell niche. Expression is not seen in ependyma elsewhere in the lateral ventricles or in the dentate gyrus, the second major neurogenic zone of the adult brain. We further show that lack of LRP2 expression in adult mice results in impaired proliferation of neural precursor cells in the SEZ resulting in decreased numbers of neuroblasts reaching the olfactory bulb. Reduced neurogenesis coincides with increased BMP4 expression and enhanced activation of downstream mediators phospho-SMAD1/5/8 and ID3 in the stem cell niche. Our findings suggest a novel mechanism whereby LRP2-mediated catabolism of BMP4 in the ependyma modulates the microenvironment of the SEZ and enables adult neurogenesis to proceed.