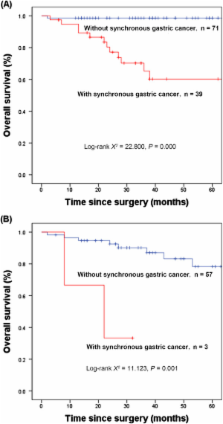 The study enrolled 170 patients with gastric GIST, who had undergone complete surgical resection (R0) from January 2000 to December 2011. Forty-two patients had synchronous gastric cancer (CA Group), whereas 128 did not (Non-CA Group). The clinicopathologic features and potential prognostic factors in the two groups were compared.

Gastric GIST with synchronous gastric cancer had a lower rate of preoperative diagnosis, with correct diagnosis often missed. Survival, however, depended primarily on the gastric cancer.

M K Balcewicz-Sablinska,  Bengt Gustavsson,  Anders Odén … (2005)
Recent breakthroughs regarding gastrointestinal stromal tumors (GIST) and their pathogenesis have redefined diagnostic criteria and have led to the development of molecularly targeted drug therapy. New treatment options mandate more accurate information regarding the incidence, prevalence, clinical behavior, and prognostic factors of GIST. All patients (n=1460) who potentially had GIST diagnosed from 1983 to 2000 in western Sweden (population, 1.3-1.6 million) were reviewed, and 288 patients with primary GIST were identified. The incidence and prevalence of GIST were determined, and predictive prognostic factors, including current risk-group stratifications, were analyzed statistically. Ninety percent of GISTs were detected clinically due to symptoms (69%) or were incidental findings at surgery (21%); the remaining 10% of GISTs were found at autopsy. Forty-four percent of symptomatic, clinically detected GISTs were categorized as high risk (29%) or overtly malignant (15%), with tumor-related deaths occurring in 63% of patients and 83% of patients, respectively (estimated median survival, of 40 months and 16 months, respectively). Tumor-related deaths occurred in only 2 of 170 of patients (1.2%) with very-low-risk, low-risk, or intermediate-risk tumors. The annual incidence of GIST was 14.5 per million. The prevalence of all GIST risk groups was 129 per million (31 per million for the high-risk group and the overtly malignant group). GIST has been under recognized: Its incidence, prevalence, and clinical aggressiveness also have been underestimated. Currently existing risk-group stratification systems based on tumor size and mitotic rate delineate GIST patients who have a poor prognosis. Prognostication in patients with GIST can be refined using a proposed risk score based solely on tumor size and proliferative index. Copyright (c) 2005 American Cancer Society.

A novel monoclonal antibody against DOG1 is a sensitive and specific marker for gastrointestinal stromal tumors.

Subbaya Subramanian,  Inigo Espinosa,  Doo Han Lee … (2008)
Gastrointestinal stromal tumors (GIST) occur primarily in the wall of the intestine and are characterized by activating mutations in the receptor tyrosine kinases genes KIT or PDGFRA. The diagnosis of GIST relies heavily on the demonstration of KIT/CD117 protein expression by immunohistochemistry. However, KIT expression is absent in approximately 4% to 15% of GIST and this can complicate the diagnosis of GIST in patients who may benefit from treatment with receptor tyrosine kinase inhibitors. We previously identified DOG1/TMEM16A as a novel marker for GIST using a conventional rabbit antipeptide antiserum and an in situ hybridization probe. Here, we describe 2 new monoclonal antibodies against DOG1 (DOG1.1 and DOG1.3) and compare their staining profiles with KIT and CD34 antibodies on 447 cases of GIST. These included 306 cases with known mutational status for KIT and PDGFRA from a molecular consultation service. In addition, 935 other mesenchymal tumors and 432 nonsarcomatous tumors were studied. Both DOG1 antibodies showed high sensitivity and specificity for GIST, with DOG1.1 showing some advantages. This antibody yielded positive staining in 370 of 425 (87%) scorable GIST, whereas CD117 was positive in 317 of 428 (74%) GIST and CD34 in 254 of 430 (59%) GIST. In GIST with mutations in PDGFRA, 79% (23/29) showed DOG1.1 immunoreactivity while only 9% (3/32) and 27% (9/33) stained for CD117 and CD34, respectively. Only 1 of 326 (0.3%) leiomyosarcomas and 1 of 39 (2.5%) synovial sarcomas among the 935 soft tissue tumors examined showed positive immunostaining for DOG1.1. In addition, DOG1.1 immunoreactivity was seen in fewer cases of carcinoma, melanoma, and seminoma as compared with KIT.

Incidence of gastrointestinal stromal tumours is underestimated: results of a nation-wide study.

R. Herings,  W Goettsch,  G Postma … (2005)
Gastrointestinal stromal tumours (GIST) are identified by their specific morphology added with immunohistochemical staining with anti-CD117, the phenotypic marker for GIST in the majority of cases. In this study the reported incidence of GIST and GIST-like tumours before and after the routine availability of the specific diagnostic marker CD117 antigen was investigated. All patients with GIST or GIST-like tumours were selected from PALGA, a nation-wide network and registry of histo- and cytopathology in the Netherlands, to calculate the incidence in 1995 and longitudinally over time between 1998 and 2003. Pathological reports were retrieved to assess the type of immunostaining used and to assess the risk category for malignant behaviour according to the recently published consensus criteria. The annual incidence of GIST as distilled from the national pathology registry increased from 2.1 per million inhabitants in 1995 to 12.7 per million inhabitants in 2003. The incidence of GIST-like tumours decreased from 17.6 per million inhabitants in 1995 to 12.7 per million inhabitants in 2003. The incidences were stable from 2000 onwards. Additional analysis in 2003 indicated that more than 90% of the GIST tested was CD117 positive, compared to only 4% of the GIST-like tumours. Almost 50% of the GIST was considered to be at high-risk for malignant behaviour, according to the consensus criteria. The increased incidence of GIST 1995-2003 is related to increased understanding of GIST pathobiology and the routine availability of the diagnostic immunohistochemical antibody directed against the CD117 antigen.