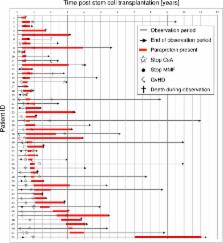 The clinical and biological relevance of a paraprotein that newly arises after allogeneic hematopoietic stem cell transplantation (allo-HSCT) in non-myeloma patients is unknown. In this study, the incidence, the course, and the clinical impact of paraproteins found after allo-HSCT were investigated in a cohort of 383 non-myeloma patients. Paraproteinemia after allo-HSCT was more frequent (52/383 patients, 14%) than the reported incidence of monoclonal gammopathy of unknown significance (MGUS) in age-matched healthy subjects and, in contrast to MGUS, did not correlate with age. In most patients (32/52, 62%), the paraprotein appeared transiently within the first year after allo-HSCT with a median duration of 6.0 months. Post-allo-HSCT paraproteinemia was significantly associated with graft versus host disease (GvHD) and correlated with a survival benefit within the first year, but not after five years following allo-HSCT. Importantly, patients with post-allo-HSCT paraproteinemia did not progress into a plasma cell myeloma as observed for MGUS inferring a distinct pathogenic mechanism. Skewing of lymphocyte subpopulations and alterations in cytokine levels in GvHD may explain the expansion of a specific plasma cell subset in non-myeloma patients undergoing allo-HSCT. Our data suggests that paraproteinemia after allo-HSCT is a reactive phenomenon rather than the consequence of clonal plasma cell transformation.

Heterogeneity of genomic evolution and mutational profiles in multiple myeloma

Madan Jagasia,  Hildegard Greinix,  Mukta Arora … (2015)
The 2005 National Institutes of Health (NIH) Consensus Conference proposed new criteria for diagnosing and scoring the severity of chronic graft-versus-host disease (GVHD). The 2014 NIH consensus maintains the framework of the prior consensus with further refinement based on new evidence. Revisions have been made to address areas of controversy or confusion, such as the overlap chronic GVHD subcategory and the distinction between active disease and past tissue damage. Diagnostic criteria for involvement of mouth, eyes, genitalia, and lungs have been revised. Categories of chronic GVHD should be defined in ways that indicate prognosis, guide treatment, and define eligibility for clinical trials. Revisions have been made to focus attention on the causes of organ-specific abnormalities. Attribution of organ-specific abnormalities to chronic GVHD has been addressed. This paradigm shift provides greater specificity and more accurately measures the global burden of disease attributed to GVHD, and it will facilitate biomarker association studies.

Trung Ho,  Edwin Alyea,  C Cutler … (2009)
Chronic graft-versus-host disease (cGVHD) causes significant morbidity and mortality in patients otherwise cured of malignancy after hematopoietic stem cell transplantation (HSCT). The presence of alloantibodies and high plasma B cell-activating factor (BAFF) levels in patients with cGVHD suggest that B cells play a role in disease pathogenesis. We performed detailed phenotypic and functional analyses of peripheral B cells in 82 patients after HSCT. Patients with cGVHD had significantly higher BAFF/B-cell ratios compared with patients without cGVHD or healthy donors. In cGVHD, increasing BAFF concentrations correlated with increased numbers of circulating pre-germinal center (GC) B cells and post-GC "plasmablast-like" cells, suggesting in vivo BAFF dependence of these 2 CD27(+) B-cell subsets. Circulating CD27(+) B cells in cGVHD comprised in vivo activated B cells capable of IgG production without requiring additional antigen stimulation. Serial studies revealed that patients who subsequently developed cGVHD had delayed reconstitution of naive B cells despite persistent BAFF elevation as well as proportional increase in CD27(+) B cells in the first year after HSCT. These studies delineate specific abnormalities of B-cell homeostasis in patients with cGVHD and suggest that BAFF targeting agents may be useful in this disease.