Determinants of adherence to antiretroviral therapy among HIV-positive adults in sub-Saharan Africa: a systematic review 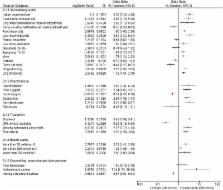 The rapid scale up of antiretroviral treatment (ART) in sub-Saharan Africa (SSA) has resulted in an increased focus on patient adherence. Non-adherence can lead to drug-resistant HIV caused by failure to achieve maximal viral suppression. Optimal treatment requires the identification of patients at high risk of suboptimal adherence and targeted interventions. The aim of this review was to identify and summarise determinants of adherence to ART among HIV-positive adults.

Systematic review of adherence to ART in SSA from January 2002 to October 2014.

A systematic search was performed in 6 databases (PubMed, Cochrane Library, EMBASE, Web of Science, Popline, Global Health Library) for qualitative and quantitative articles. Risk of bias was assessed. A meta-analysis was conducted for pooled estimates of effect size on adherence determinants.

Of the 4052 articles screened, 146 were included for final analysis, reporting on determinants of 161 922 HIV patients with an average adherence score of 72.9%. Main determinants of non-adherence were use of alcohol, male gender, use of traditional/herbal medicine, dissatisfaction with healthcare facility and healthcare workers, depression, discrimination and stigmatisation, and poor social support. Promoters of adherence included counselling and education interventions, memory aids, and active disclosure among people living with HIV. Determinants of health status had conflicting influence on adherence.

Adherence to HAART: A Systematic Review of Developed and Developing Nation Patient-Reported Barriers and Facilitators

Status of implementation of Framework Convention on Tobacco Control (FCTC) in Ghana: a qualitative study

Ellis Owusu-Dabo,  Ann McNeill,  Sarah Lewis … (2010)
Background The Framework Convention on Tobacco Control (FCTC), a World Health Organization treaty, has now been ratified by over 165 countries. However there are concerns that implementing the Articles of the treaty may prove difficult, particularly in the developing world. In this study we have used qualitative methods to explore the extent to which the FCTC has been implemented in Ghana, a developing country that was 39th to ratify the FCTC, and identify barriers to effective FCTC implementation in low income countries. Methods Semi-structured interviews with 20 members of the national steering committee for tobacco control in Ghana, the official multi-disciplinary team with responsibility for tobacco control advocacy and policy formulation, were conducted. The Framework method for analysis and NVivo software were used to identify key issues relating to the awareness of the FCTC and the key challenges and achievements in Ghana to date. Results Interviewees had good knowledge of the content of the FCTC, and reported that although Ghana had no explicitly written policy on tobacco control, the Ministry of Health had issued several tobacco control directives before and since ratification. A national tobacco control bill has been drafted but has not been implemented. Challenges identified included the absence of a legal framework for implementing the FCTC, and a lack of adequate resources and prioritisation of tobacco control efforts, leading to slow implementation of the treaty. Conclusion Whilst Ghana has ratified the FCTC, there is an urgent need for action to pass a national tobacco control bill into law to enable it to implement the treaty, sustain tobacco control efforts and prevent Ghana's further involvement in the global tobacco epidemic.

Leon Regensberg,  Jean Nachega,  R Chaisson … (2009)
To determine adherence to and effectiveness of antiretroviral therapy (ART) in adolescents vs. adults in southern Africa. Observational cohort study. Aid for AIDS, a private sector disease management program in southern Africa. Adolescents (age 11-19 years; n = 154) and adults (n = 7622) initiating ART between 1999 and 2006 and having a viral load measurement within 1 year after ART initiation. Primary: virologic suppression (HIV viral load < or = 400 copies/mL), viral rebound, and CD4 T-cell count at 6, 12, 18, and 24 months after ART initiation. Secondary: adherence assessed by pharmacy refills at 6, 12, and 24 months. Multivariate analyses: loglinear regression and Cox proportional hazards. A significantly smaller proportion of adolescents achieved 100% adherence at each time point (adolescents: 20.7% at 6 months, 14.3% at 12 months, and 6.6% at 24 months; adults: 40.5%, 27.9%, and 20.6% at each time point, respectively; P < 0.01). Patients achieving 100% 12-month adherence were significantly more likely to exhibit virologic suppression at 12 months, regardless of age. However, adolescents achieving virologic suppression had significantly shorter time to viral rebound (adjusted hazard ratio 2.03; 95% confidence interval: 1.31 to 3.13; P < 0.003). Adolescents were less likely to experience long-term immunologic recovery despite initial CD4 T-cell counts comparable to adults. Compared with adults, adolescents in southern Africa are less adherent to ART and have lower rates of virologic suppression and immunologic recovery and a higher rate of virologic rebound after initial suppression. Studies must determine specific barriers to adherence in this population and develop appropriate interventions.