3D-measurement of tracheobronchial angles on inspiratory and expiratory chest CT in COPD: respiratory changes and correlation with airflow limitation 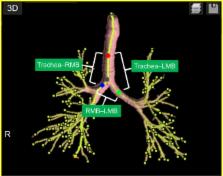 A total of 80 smokers underwent combined inspiratory and expiratory CT scans. Of these, 65 subjects also performed spirometry and 55 patients were diagnosed with COPD. On CT scans, 3-dimensinal tracheobronchial angles (trachea–right main bronchus [RMB], trachea–left main bronchus [LMB], and RMB–LMB) were automatically measured by software. Lung volumes at inspiration and expiration were also automatically calculated. Changes in tracheobronchial angles between inspiration and expiration were assessed by the Mann–Whitney test. Correlations of the angles with lung volume, airflow limitation, and CT-based emphysema index were evaluated by Spearman rank correlation.

Tracheobronchial angles change during respiration and are correlated with severity of COPD and emphysema.

Dimensions of the normal human trachea.

E Breatnach,  Andy Fraser,  Stephen B G Abbott (1984)
The coronal and sagittal diameters of the tracheal air column were measured on posteroanterior and lateral chest radiographs of 808 patients with no clinical or radiographic evidence of respiratory disease. The 430 male and 378 female subjects were 10-79 years of age. Assuming a normative range that encompasses three standard deviations from the mean or 99.7% of the normal population, the upper limits of normal for coronal and sagittal diameters, respectively, in men aged 20-79, are 25 mm and 27 mm; in women, they are 21 mm and 23 mm, respectively. The lower limit of normal for both dimensions is 13 mm in men and 10 mm in women. Deviation from these figures reflects pathologic widening or narrowing of the tracheal air column. No statistically significant correlation was found between tracheal caliber and body weight or body height.