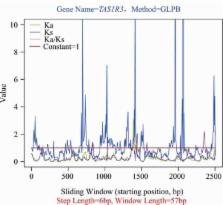 We present an integrated stand-alone software package named KaKs_Calculator 2.0 as an updated version. It incorporates 17 methods for the calculation of nonsynonymous and synonymous substitution rates; among them, we added our modified versions of several widely used methods as the gamma series including γ-NG, γ-LWL, γ-MLWL, γ-LPB, γ-MLPB, γ-YN and γ-MYN, which have been demonstrated to perform better under certain conditions than their original forms and are not implemented in the previous version. The package is readily used for the identification of positively selected sites based on a sliding window across the sequences of interests in 5’ to 3’ direction of protein-coding sequences, and have improved the overall performance on sequence analysis for evolution studies. A toolbox, including C++ and Java source code and executable files on both Windows and Linux platforms together with a user instruction, is downloadable from the website for academic purpose at https://sourceforge.net/projects/kakscalculator2/.

The Bioperl toolkit: Perl modules for the life sciences.

Peregrine Osborne,  Heikki Lehvaslaiho,  D. Wilkinson … (2002)
The Bioperl project is an international open-source collaboration of biologists, bioinformaticians, and computer scientists that has evolved over the past 7 yr into the most comprehensive library of Perl modules available for managing and manipulating life-science information. Bioperl provides an easy-to-use, stable, and consistent programming interface for bioinformatics application programmers. The Bioperl modules have been successfully and repeatedly used to reduce otherwise complex tasks to only a few lines of code. The Bioperl object model has been proven to be flexible enough to support enterprise-level applications such as EnsEMBL, while maintaining an easy learning curve for novice Perl programmers. Bioperl is capable of executing analyses and processing results from programs such as BLAST, ClustalW, or the EMBOSS suite. Interoperation with modules written in Python and Java is supported through the evolving BioCORBA bridge. Bioperl provides access to data stores such as GenBank and SwissProt via a flexible series of sequence input/output modules, and to the emerging common sequence data storage format of the Open Bioinformatics Database Access project. This study describes the overall architecture of the toolkit, the problem domains that it addresses, and gives specific examples of how the toolkit can be used to solve common life-sciences problems. We conclude with a discussion of how the open-source nature of the project has contributed to the development effort.

γ-MYN: a new algorithm for estimating Ka and Ks with consideration of variable substitution rates

Da-Peng Wang,  Hao-Lei Wan,  Song Zhang … (2009)
Background Over the past two decades, there have been several approximate methods that adopt different mutation models and used for estimating nonsynonymous and synonymous substitution rates (Ka and Ks) based on protein-coding sequences across species or even different evolutionary lineages. Among them, MYN method (a Modified version of Yang-Nielsen method) considers three major dynamic features of evolving DNA sequences–bias in transition/transversion rate, nucleotide frequency, and unequal transitional substitution but leaves out another important feature: unequal substitution rates among different sites or nucleotide positions. Results We incorporated a new feature for analyzing evolving DNA sequences–unequal substitution rates among different sites–into MYN method, and proposed a modified version, namely γ (gamma)-MYN, based on an assumption that the evolutionary rate at each site follows a mode of γ-distribution. We applied γ-MYN to analyze the key estimator of selective pressure ω (Ka/Ks) and other relevant parameters in comparison to two other related methods, YN and MYN, and found that neglecting the variation of substitution rates among different sites may lead to biased estimations of ω. Our new method appears to have minimal deviations when relevant parameters vary within normal ranges defined by empirical data. Conclusion Our results indicate that unequal substitution rates among different sites have variable influences on ω under different evolutionary rates while both transition/transversion rate ratio and unequal nucleotide frequencies affect Ka and Ks thus selective pressure ω. Reviewers This paper was reviewed by Kateryna Makova, David A. Liberles (nominated by David H Ardell), Zhaolei Zhang (nominated by Mark Gerstein), and Shamil Sunyaev.

M Max,  Y G Shanker,  L. Huang … (2001)
The ability to taste the sweetness of carbohydrate-rich foodstuffs has a critical role in the nutritional status of humans. Although several components of bitter transduction pathways have been identified, the receptors and other sweet transduction elements remain unknown. The Sac locus in mouse, mapped to the distal end of chromosome 4 (refs. 7-9), is the major determinant of differences between sweet-sensitive and -insensitive strains of mice in their responsiveness to saccharin, sucrose and other sweeteners. To identify the human Sac locus, we searched for candidate genes within a region of approximately one million base pairs of the sequenced human genome syntenous to the region of Sac in mouse. From this search, we identified a likely candidate: T1R3, a previously unknown G protein-coupled receptor (GPCR) and the only GPCR in this region. Mouse Tas1r3 (encoding T1r3) maps to within 20,000 bp of the marker closest to Sac (ref. 9) and, like human TAS1R3, is expressed selectively in taste receptor cells. By comparing the sequence of Tas1r3 from several independently derived strains of mice, we identified a specific polymorphism that assorts between taster and non-taster strains. According to models of its structure, T1r3 from non-tasters is predicted to have an extra amino-terminal glycosylation site that, if used, would interfere with dimerization.

This is an open access article under the CC BY-NC-SA license (http://creativecommons.org/licenses/by-nc-sa/3.0/).