Two Birds with One Stone: Possible Dual-Role of Oxytocin in the Treatment of Diabetes and Osteoporosis 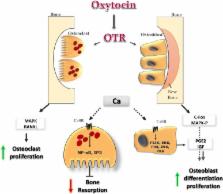 Oxytocin (OT), a hormone most commonly associated with labor and lactation, may have a wide variety of physiological and pathological functions, which makes OT and its receptor potential targets for drug therapy. In this review, we highlight the newly discovered metabolic role of OT in diabetes and its complication, such as diabetic osteopathy. OT may have positive metabolic effects; this is based on the change in glucose metabolism, lipid profile, and insulin sensitivity. It may modify glucose uptake and insulin sensitivity both through direct and indirect effects. It may also cause regenerative changes in diabetic pancreatic islet cells. Moreover, it has an anabolic effect on the bone biology. So, the activation of the OT receptor pathway by infusion of OT, OT analogs, or OT agonists may represent a promising approach for the treatment of diabetes and some of its complications, including diabetic osteopathy.

Problems with measuring peripheral oxytocin: can the data on oxytocin and human behavior be trusted?

Fernando J. Méndez,  Patricia Smith Churchland,  Ann E. McCullough (2013)
Research on the neurobiological and behavioral effects of oxytocin (OT), as well as on its possible therapeutic applications, has intensified in the past decade. Accurate determination of peripheral OT levels is essential to reach meaningful conclusions and to motivate, support and inform clinical interventions. Different, but concordant, methods for measuring plasma OT have been developed over the past four decades, but since 2004 several commercially available methods have been favored in research with humans. Evaluation of these methods reveals that they lack reliability when used on unextracted samples of human fluids, and that they tag molecules in addition to OT, yielding estimates that are wildly discrepant with an extensive body of earlier findings that were obtained using methods that are well validated, but more laborious. An accurate, specific, and readily available method for measuring OT that can be adopted as the standard in the field is urgently needed for advances in our understanding of OT's roles in cognition and behavior. Copyright © 2013 Elsevier Ltd. All rights reserved.

Specialty section: This article was submitted to Endocrinology of Aging, a section of the journal Frontiers in Endocrinology