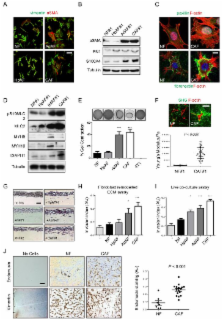 To learn more about cancer-associated fibroblasts (CAFs), we have isolated fibroblasts from different stages of breast cancer progression and analysed their function and gene expression. These analyses reveal that activation of the YAP transcription factor is a signature feature of CAFs. YAP function is required for CAFs to promote matrix stiffening, cancer cell invasion and angiogenesis. Remodelling of the ECM and promotion of cancer cell invasion requires the actomyosin cytoskeleton. YAP regulates the expression of several cytoskeletal regulators, including ANLN, and DIAPH3, and controls the protein levels of MYL9/MLC2. Matrix stiffening further enhances YAP activation, thus establishing a feed-forward self-reinforcing loop that helps to maintain the CAF phenotype. Actomyosin contractility and Src function are required for YAP activation by stiff matrices. Further, transient ROCK inhibition is able to disrupt the feed-forward loop leading to a long-lasting reversion of the CAF phenotype.

Michael Zeisberg,  Raghu Kalluri (2006)
Tumours are known as wounds that do not heal - this implies that cells that are involved in angiogenesis and the response to injury, such as endothelial cells and fibroblasts, have a prominent role in the progression, growth and spread of cancers. Fibroblasts are associated with cancer cells at all stages of cancer progression, and their structural and functional contributions to this process are beginning to emerge. Their production of growth factors, chemokines and extracellular matrix facilitates the angiogenic recruitment of endothelial cells and pericytes. Fibroblasts are therefore a key determinant in the malignant progression of cancer and represent an important target for cancer therapies.

Role of YAP/TAZ in mechanotransduction.

Jimmy Le Bec,  Leonardo Morsut,  Silvio Bicciato … (2011)
Cells perceive their microenvironment not only through soluble signals but also through physical and mechanical cues, such as extracellular matrix (ECM) stiffness or confined adhesiveness. By mechanotransduction systems, cells translate these stimuli into biochemical signals controlling multiple aspects of cell behaviour, including growth, differentiation and cancer malignant progression, but how rigidity mechanosensing is ultimately linked to activity of nuclear transcription factors remains poorly understood. Here we report the identification of the Yorkie-homologues YAP (Yes-associated protein) and TAZ (transcriptional coactivator with PDZ-binding motif, also known as WWTR1) as nuclear relays of mechanical signals exerted by ECM rigidity and cell shape. This regulation requires Rho GTPase activity and tension of the actomyosin cytoskeleton, but is independent of the Hippo/LATS cascade. Crucially, YAP/TAZ are functionally required for differentiation of mesenchymal stem cells induced by ECM stiffness and for survival of endothelial cells regulated by cell geometry; conversely, expression of activated YAP overrules physical constraints in dictating cell behaviour. These findings identify YAP/TAZ as sensors and mediators of mechanical cues instructed by the cellular microenvironment.

Luther Pollard,  Johanna A. Joyce (2009)
Metastasis is a multistage process that requires cancer cells to escape from the primary tumour, survive in the circulation, seed at distant sites and grow. Each of these processes involves rate-limiting steps that are influenced by non-malignant cells of the tumour microenvironment. Many of these cells are derived from the bone marrow, particularly the myeloid lineage, and are recruited by cancer cells to enhance their survival, growth, invasion and dissemination. This Review describes experimental data demonstrating the role of the microenvironment in metastasis, identifies areas for future research and suggests possible new therapeutic avenues.

F.C. carried out all the experiments except those noted otherwise. N.E. performed all the qRT-PCR analyses and generated data for Figure 7e. E.S. generated data for Figures 3, 6g and 7b. E.M. and G.C. performed all the AFM analyses. A. G-G. and S.H. isolated and immortalized several breast and human CAFs. R.P.J. wrote the script for organotypic invasion quantification and helped analysing data for Supplementary Figure 2c&e. S.I.C., K.H. and P.W. provided clinical material. F.C. and E.S. conceived the study and wrote the manuscript.