A Case of Desmoplastic Trichoepithelioma with Ossification 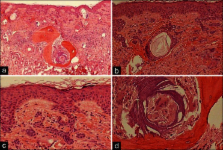 Jolanda M A Boer,  M Bresch,  M Costache (2008)
It is often difficult to differentiate between cases of desmoplastic trichoepithelioma (DTE) and morphoeic basal cell carcinoma (MBCC) because both lesions have many features in common. The aim was to clarify which criteria for differentiation offer the best basis for diagnosis. Nineteen cases of DTE were compared histologically and immunohistochemically with 18 cases of MBCC (using CD34, CD10, cytokeratin (CK) 20, androgen receptor, Bcl-2, Ki67 and p53 immunohistochemistry). Sensitivity, specificity and positive and negative likelihood ratios were calculated. Convincing diagnostic evidence for DTE was identified for the following features: symmetry, good circumscription, depression in the lesion's centre. However, these features are applicable only to excisional specimens, not to specimens taken by punch biopsy. Signs of infundibular, follicular or sebaceous differentiation, calcification, osteoma, association with a melanocytic naevus, and absence of solar elastosis below the lesion provided equally robust diagnostic evidence for DTE. Immunohistochemically, only staining of Merkel cells with CK20 and negativity of aggregations with androgen receptors were diagnostically convincing for DTE. Ki67 and p53 revealed significant differences, but a lower positive likelihood ratio. Histopathologistics need to identify with confidence subtle signs of infundibular, follicular and sebaceous differentiation because these features are dependable criteria to differentiate DTE from MBCC. Immunohistochemistry for androgen receptors and CK20 is helpful, but interpretation is difficult in some DTEs when few cells are immunopositive for these markers.

M R Brownstein,  Nina Shapiro (1977)
Fifty examples of a distinctive clinicopathologic entity occurred in 49 patients who ranged in age from 8 to 70 (median 46) years. Forty-nine tumors were on the face, mainly the cheek, chin and forehead; most were present one to five years, and 85% of the patients were female. The growths varied in size from 3 to 8 mm; many were hard and annular, with a raised border and depressed nonulcerated center. Histologically, narrow strands of basaloid cells and epidermoid cyts infiltrated a fibrotic stroma. This tumor, which we have named desmoplastic trichoepithelioma, must be differentiated histologically from morphealike basal cell carcinoma, desmoplastic cutaneous metastasis, and certain benign adnexal neoplasms.